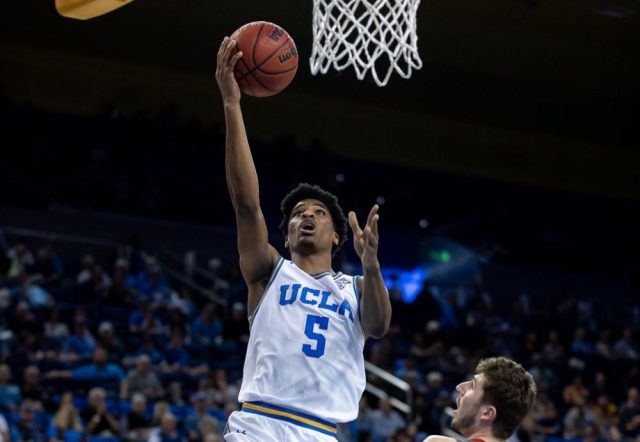 Chris Smith will be testing the NBA waters after posting his best season yet.

The junior guard for UCLA men’s basketball declared for the 2020 NBA Draft early Tuesday morning, ESPN’s Jonathan Givony reported. Smith is coming off a career year with the Bruins, in which he led the team in scoring and set personal bests across the board.

Smith is the first Bruin to enter the draft pool this offseason, and he was the only one expected to consider making the leap this spring. It is unclear whether Smith hired an agent or chose to retain his eligibility for the time being.

Smith is considered to be a potential second-round pick and is ranked No. 72 in ESPN’s Top 100.

While individual predraft workouts would usually start in early-to-mid-April, this year’s process is going to be a little different.

The NBA notified its teams Monday they cannot conduct any in-person tryouts for the time being as a result of the COVID-19 outbreak. The NBA Draft Combine, which was scheduled to start May 21, is also unlikely to proceed, but teams are permitted to hold virtual interviews with prospects. They cannot watch live online workouts, however.

With no workouts or showcases on the horizon, Smith’s final season in Westwood will serve as the biggest source of film for interested pro scouts.

This season, Smith bumped those numbers up to 13.1 points and 5.4 rebounds in 28.3 minutes per game on 45.8% shooting from the field, a 34.1% clip from 3 and an 84.0% mark from the charity stripe. Smith’s production boost was enough to earn him the Pac-12 Most Improved Player Award of the Year and a spot on the All-Pac-12 First Team.

With Smith gone, the Bruins will have rising sophomores Jaime Jaquez Jr. and Jake Kyman, as well as rising juniors David Singleton and Jules Bernard, heading up the wing rotation in 2020-2021. Incoming four-star freshman guard Jaylen Clark will likely be fighting for Smith’s minutes as well.

Smith still has one year of collegiate eligibility remaining should he decide to return to UCLA before the June 3 withdrawal deadline.

The NBA Draft is currently still scheduled for June 25, but teams have also been told to prepare for that date to change.