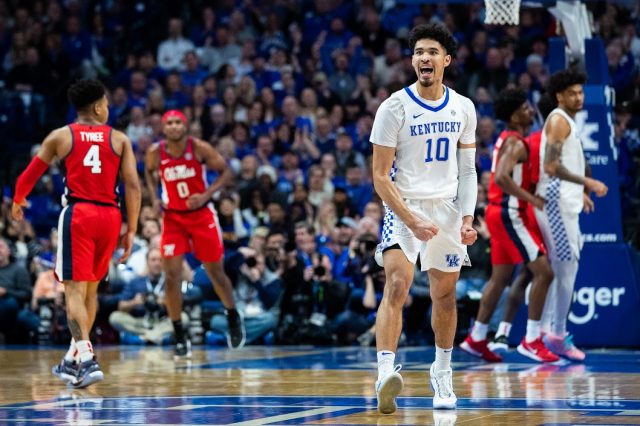 One year ago, Johnny Juzang picked the Wildcats over the Bruins.

Now, he’s coming home to trade in blue and white for blue and gold.

Juzang is transferring from Kentucky to UCLA men’s basketball, he announced Thursday on Twitter. The 6-foot-6 guard was raised in Los Angeles and was a four-star recruit coming out of Harvard-Westlake School in 2019.

Juzang said he will be pursuing a waiver from the NCAA for immediate eligibility, but his status for next season is still to be determined.

The Bruins pursued Juzang out of high school when former coach Steve Alford was still at the helm, as they hosted him on an unofficial visit Aug. 18, 2016, and made him a scholarship offer July 19, 2017. Juzang entered the transfer portal March 27, naming UCLA, Arizona, Oregon, Notre Dame, Texas Tech and Villanova as his top six destinations.

“Thinking about competing for a national title for the hometown team under coach (Mick) Cronin is something that genuinely motivates me and wants me to get after it, so I’m super excited,” Juzang told the Los Angeles Times.

With the coronavirus outbreak keeping Juzang and others at home, he was unable to take visits to the other five schools. Juzang said in his announcement tweet spending time at home during quarantine has changed his priorities, as the wing grew up just 15 minutes outside of Westwood.

Juzang played in 28 games for Kentucky his freshman season, averaging 2.9 points and 1.9 rebounds in 12.4 minutes per game and two starts.

Juzang notched a career-high 13 points on 4-of-4 shooting from the field and 3-of-3 from behind the arc on the road against Tennessee on Feb. 8. In his final outing with Kentucky, Juzang scored 10 points in 33 minutes against Florida.

The Los Angeles native shot 37.7% from the field and 32.6% from deep in his lone season with the Wildcats.

Juzang played just three years in high school, as he reclassified to the class of 2019 last April. In his 74-game career with Harvard-Westlake, Juzang averaged 19.9 points and 8.4 rebounds per game while shooting 44% from the field, 35% from long range and 80% on free throws.

“Being able to score at a high level, I see myself as an all-around basketball player,” Juzang said in an interview with 247Sports. “Scoring is one of the best things I do. The year at Kentucky was great for me and how they developed me and how I learned there.”

Despite shooting 4.2 free throws per game in high school, Juzang averaged just 0.4 attempts per game from the charity stripe with Kentucky.

With the scholarships from guard Prince Ali, forward Alex Olesinski and forward Shareef O’Neal coming off the books, UCLA had room for three new players regardless of Smith’s decision. Between Juzang and incoming freshmen guards Daishen Nix and Jaylen Clark, the Bruins will need Smith to commit to the NBA for good if they want to bring in one last transfer or recruit.