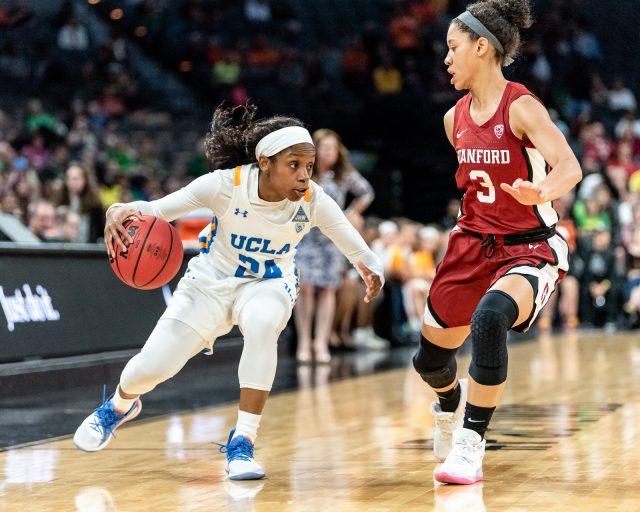 After having her final season with UCLA women's basketball cut short because of the coronavirus pandemic, redshirt senior guard Japreece Dean looks to the 2020 WNBA Draft. (Lauren Man/Daily Bruin)

When redshirt senior guard Japreece Dean took the court in No. 10 UCLA women’s basketball’s 67-51 Pac-12 tournament loss against No. 7 Stanford, she didn’t know that contest would be her last as a Bruin.

It wasn’t until the NCAA tournament was canceled five days later on March 12 because of the coronavirus pandemic that she realized the next steps in her basketball career were right around the corner, and that she had missed out on one last chance to perform with professional scouts watching.

“I think (the missed opportunity) is what hurt me the most,” Dean said. “(It hurt to not be able) to showcase what I can do, what our team can do, because I for sure think (the NCAA tournament) would have made my chances better or put me in a different position.”

What the future looks like for Dean is unclear because of the global regulations surrounding the COVID-19 crisis as professional sports have been turned on their heads in recent weeks. The WNBA is no exception, with the league postponing both its training camps and its May 15 start to the regular season.

Dean declared for the WNBA draft – which will still take place remotely April 17 – with ESPN’s Mechelle Voepel’s latest mock draft slating Dean to be selected at the beginning of the third round by the Atlanta Dream.

While Dean said she was grateful for any opportunity to play at the next level, she noted that her own draft day expectations are higher.

“I just want to get drafted honestly, but I am competitive and do think of myself highly, so I think that I can go better than the third round, but whatever happens, happens,” Dean said. “I’m going to take every opportunity I can and take advantage of it.”

Luckily for Dean, she has a built-in mentor in former UCLA guard and current player in her third year with the Seattle Storm, Jordin Canada. Canada was drafted as the fifth overall pick in the 2018 WNBA Draft, and she said she has helped Dean prepare for the selection process.

“I know this is an important time for (Dean), so (I’ve just been trying) to encourage her and talk to her as much as possible and answer her questions,” Canada said.

Both Canada and Dean have had to alter their training routines in the wake of new government-mandated restrictions – but these changes look different for two players at dissimilar points in their careers.

Since the Centers for Disease Control and Prevention placed social distancing recommendations into effect, Dean said she has not had access to a basketball gym, but she has lifted weights and has been running to stay in shape. 2018 WNBA champion Canada said she has a workout regiment from the Storm’s training staff including yoga and pilates.

Canada said the difficulty in getting back to basketball could be furthered if the WNBA season is canceled. She would have a year without basketball as she did not play internationally this past winter, having previously spent the 2018-19 season overseas competing in Poland’s Basket Liga Kobiet.

Despite the uncertainty, however, Canada – who was named to the All-Defensive First Team and led the WNBA in steals in 2019 – said she was confident that her defensive abilities will remain strong while social distancing recommendations prohibit her from practicing with other players.

“I’m not worried at all,” Canada said. “I’m sure everyone will be a little bit rusty, but I think once you get back into the swing of things, things will be just fine.”

Dean said she has been advised by coach Cori Close through the unique challenges caused by the novel coronavirus.

Close said the departing point guard changed the program’s culture and said she understood the potential hit to Dean’s future prospects as her final collegiate season was shortened.

“I couldn’t be any more proud of (Dean) because she has the most to lose here,” Close said.

Dean said she still plans to pursue a career overseas like Canada – a common practice by WNBA players to increase their earnings – regardless of the status of the WNBA’s 2020 season.