Un-Connon Opinions: Chris Smith would be wise to forgo NBA Draft, stay at UCLA for his senior year 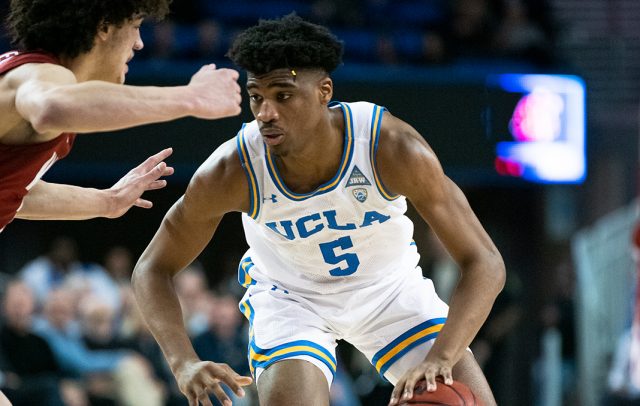 Chris Smith would be lucky to get selected in this year’s NBA Draft.

That’s not a slight on his game – the UCLA men’s basketball junior won Pac-12 Most Improved Player of the Year and earned a spot on the First Team All-Pac-12 this season. Looking at where the guard was even a year ago, that’s a major leap and one that certainly warrants praise.

But that doesn’t mean NBA teams are going to bite – at least, not yet.

Smith took the first step toward the pros when he declared for the 2020 NBA Draft on April 7. Between his athleticism, versatility and length, he is certainly an intriguing prospect. Add in his improved shooting, rebounding and defensive abilities he picked up under coach Mick Cronin, and he may just have a potential NBA career in his future.

That doesn’t mean now is the time for him to start it, however, and he can just take a look around at his former teammates to recognize that.

Smith played two seasons alongside guard/forward Kris Wilkes, who averaged 15.5 points per game in his two seasons with UCLA. Smith and Wilkes measure in at 6-foot-9 and 6-foot-8, respectively, and they both weigh 215 pounds.

Wilkes was only a freshman when he put up those numbers, so it’s not exactly an apples-to-apples comparison. However, if Wilkes got the advice to return to school in 2018, it’d be hard to imagine Smith gets told any different over the next few months.

Even when Wilkes bumped up his scoring and usage numbers his sophomore season, he still wound up going undrafted in 2019. After missing the NBA Summer League as a result of illness, Wilkes went the entire 2019-2020 season without a pro contract.

Nothing is a sure thing in the NBA Draft, with only 60 players getting the chance to hear their names called while the rest are left to fight for scraps.

Considering two of the three Bruins who left early last season went undrafted, Smith’s prospects don’t look great in 2020. Bleacher Report doesn’t have him ranked in its top-50 prospects, while ESPN has him slotted in at No. 72 and the Athletic pegged him at No. 99.

Smith’s stats, rankings and pro prospects parallel the situation another former teammate of his, Thomas Welsh, faced in 2017.

Welsh ultimately decided to return for his senior year at UCLA, and he wound up averaging 12.6 points and 10.8 rebounds per game in his final season. And despite the fact he had only taken one 3-pointer in his 99-game career up until that point, Welsh shot 40.2% from deep on 112 attempts during his final year in Westwood.

His ability to diversify his game while simultaneously improving his go-to traits was enough to lift Welsh into the second round, as he was selected No. 58 overall by the Denver Nuggets in 2018. It’s difficult to see Smith becoming a 40% 3-point shooter next year, but the same could have been said about Welsh.

Smith has seen his per game and efficiency numbers go up drastically from season to season, and there’s no reason to think that he’s hit his peak either. He had a good season – based on the fact he made First Team All-Pac-12, he was a top-10 player in the conference.

But if that’s what he can do at age 20 in his first year as a full starter under a brand new coach, imagine what he could do next season. Smith could flirt with 18 points per game and prove himself a candidate for Pac-12 Men’s Basketball Player of the Year with Oregon’s Payton Pritchard, Washington’s Isaiah Stewart and almost the entire first team heading for the pros.

It’s hard to fault Smith for aiming high – there isn’t anyone on campus that’s actively rooting against his NBA career. There’s nothing wrong with betting on yourself, but the bet still has to be a smart one.

Looking at Wilkes as a cautionary tale and Welsh as a guide, Smith’s decision should be simple.

If he wants to maximize his potential and draft stock, coming back for his senior year seems like the obvious choice.