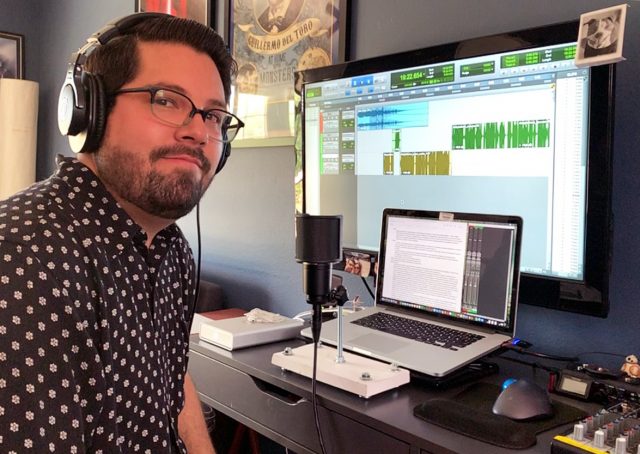 Graduate student Martin Ibarra-Ramos is the chair of Cineposium, a film and media programming organization. As with many of the events, screenings and productions at UCLA, the organization has transitioned into a podcast format in light of the quarantine. (Alex Driscoll/Daily Bruin)

Correction: The original version of the photo captions misidentified Martin Ibarra-Ramos in the photos.

However, the organization has larger issues than its mispronunciation with so many film screenings and classes being canceled and moved to a virtual format at UCLA because of COVID-19. The graduate student organization Cineposium – focused on film and media programming – was no exception. While Cineposium was able to host screenings on campus before UCLA went remote, the organization was forced to transition into a podcast format. In the organization’s new online format, co-host and graduate student Alexx Apicella said each week members watch a suggested film that’s available on a streaming service, later discussing and analyzing it through the podcast.

“We (transitioned) to the podcast because something we tried to do with our screenings was critically engage with the film and really get to talk about it,” Apicella said. “With asynchronous digital viewings there’s no great way to do that, so our solution was the podcast.”

The podcast episode content is similar to the introductions at an in-person screening where they discuss what they did or didn’t enjoy about the film said chair and graduate student Reed Williams. The organization explores what members find interesting about a film, which can spill over into Cineposium’s social media posts to further spark new conversations, he said.

Cineposium was originally created by cinema and media studies students who wanted to practice presenting their work, Williams said. Many students in the program are seeking job opportunities outside academia while still searching for a space to practice critically engaging with films, Apicella said.

The initial structure of Cineposium allowed students to pull films from the UCLA archives in their original format and discuss the content in an academic manner with an audience. With this new format of watching a films online and listening to an analysis later via the podcast, guest speakers are able to make their commentary as analytic or personal as they desire, said another co-host and graduate student Martin Ibarra-Ramos.

“It’s important for us to apply the academic element to (the analysis). This is something that (we’re) trying to design around our personal interests,” Ibarra-Ramos said.

However, he said they had to contend with new challenges such as audio quality, accessibility and audience reach. Accessibility was a particular concern for Ibarra-Ramos because they had to ensure listeners could also watch the recommended content at home without barriers stemming from lack of finances or subscriptions.

For Apicella, however, the main challenge with the transition online has been audience reach. Prior to the quarantine, their screenings consisted of a small, comfortable group of about 10-15 graduate students on campus. The team now must learn how to effectively utilize social media marketing on Instagram and Twitter to develop its online presence and expand its audience reach so that anyone – not just UCLA cinema and media studies graduate students – can access Cineposium’s content, Apicella said.

“We’re not just a podcast anymore,” Apicella said. “We used to just have an email flier that we’d send out to the department and students on our mailing list, but we’ve expanded past that into our podcast that’s on different platforms. … We’re hoping to be able to continue to expand.”

While transitioning to a podcast and expanding audience reach has been an unexpected challenge, Ibarra-Ramos said he hopes to continue the podcast even when social distancing ends to supplement their in-person screenings. This gives students the chance to mimic film festivals, so they can actively practice curating content alongside critical analysis, Williams said.

“The podcast’s organization serves to give individuals the freedom to have a platform to just explore one’s interests,” Williams said.