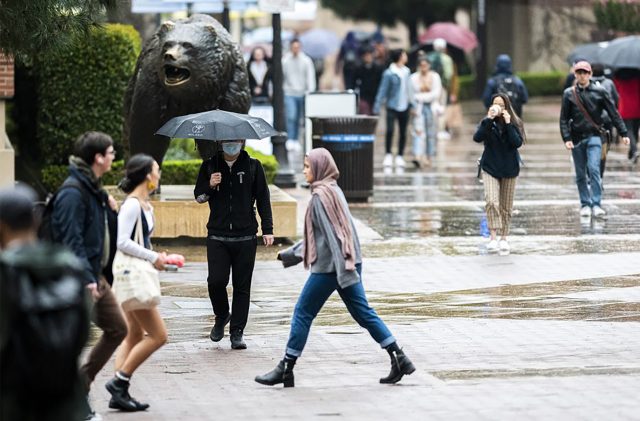 Over the past months, racism against the Asian American community has grown because of COVID-19 and its country of origin. These issues stem from microaggressions and racialization of the coronvirus, UCLA professors and students said. (Liz Ketcham/Photo Editor)

When Jason Vu, a third-year global studies and Asian American studies student, went to Thai Town on a class trip last quarter, a lady saw him and immediately covered her face with a scarf and walked away to avoid him.

Vu said the encounter felt offensive as it implies he is contagious or threatening because of his Asian heritage.

Within the first two weeks of opening, the reporting center received more than 1,100 reports of discrimination toward Asian Americans, which has been attributed to COVID-19 and its racialization, according to the council.

On March 16, President Donald Trump tweeted, “The United States will be powerfully supporting those industries, like Airlines and others, that are particularly affected by the Chinese Virus.”

Min Zhou, an Asian American studies and sociology professor, said the usage of phrases like “Chinese Virus” makes it seem as if the virus is innately Chinese, which prescribes blame to the Chinese and can invoke anti-Chinese and broader anti-Asian sentiment, Zhou added.

Natalie Masuoka, an associate professor of political science and Asian American studies, said many people rely on politicians to learn about current issues, however a 280-character tweet discourages people to view the coronavirus in a nuanced way.

“Most of us really don’t have the time to deeply study any given issue,” Masuoka said. “So we rely on messages offered to us via our leaders, things they see on the media, which oftentimes aren’t detailed (and are) offered in a short sound bite.”

Racialization like such is problematic because it homogenizes groups of people, Masuoka said. People might not be able to distinguish between China, the Chinese government and Chinese Americans who were born and raised in the United States, she added.

“We think about how political elites can also generate a greater ill will based on their rhetoric,” Masuoka said. “The administration’s use of ‘Chinese Virus’ and ‘Wuhan Virus,’ it would incite antipathy towards people with Asian descent.”

Racialization is often contextually driven, Masuoka said. An example of this is the model minority stereotype, which stereotypes Asian Americans’ intelligence. This stereotype arose because of an expectation that certain subgroups of the population, in this case Asian Americans, will have better skills than other groups.

Masuoka added the model minority stereotype for Asian Americans is used as a political tool when it suits politicians interests.

“Different events can trigger greater reliance on the negative stereotypes that exist for Asian Americans,” she said. “(There is) this interesting duality of being the model minority and forever foreigner, persistent foreigner in the land.”

The racialization of the coronavirus may also be attributed to the political relationship between China and the United States, Zhou said. Had the virus originated in a country that was not strategic to the United States’ political motives, government officials might not have prescribed blame in the same manner, Zhou added.

This political move has caused Asian Americans to be racially homogenized, despite their diverse cultural heritages, Zhou said. If anything happens to one group, such as Chinese Americans, the entire Asian American group is affected, she added.

One reason people may commit hate crimes is because they feel frustrated because of personal reasons, Zhou said.

“(Hate crime) is an easy way of venting your anger, it’s a handy way, an irresponsible way,” Zhou said. “They are supported by their politicians, their organizations which make them think they are not acting on their own and they have support (for their actions).”

UCLA’s Asian Pacific Coalition is collecting narratives from students on their experiences of xenophobia in their COVID-19 Artivism campaign.

The campaign is a way to memorialize Asian American experiences and enables people to directly see these experiences without having to rely on tabloids, Yuen added.

“Sometimes when you are able to visualize and see someone has gone through a microaggression experience, then you can realize you have gone through one,” she said. “Being able to share narratives allows that type of healing.”

Lewis is an Opinion columnist and News contributor.