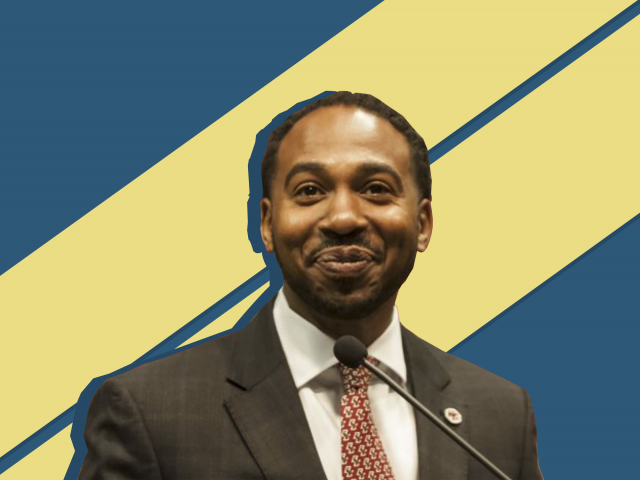 It would be cliche to say the stakes are high for incoming UCLA Athletics Director Martin Jarmond.

But that doesn’t make it any less true.

UCLA Athletics officially announced Jarmond would head up the department Tuesday, locking him into a six-year contract that makes him one of the highest-paid athletics directors in the Pac-12 and the country. While the Bruins broke the bank to bring in the Boston College athletics director, Jarmond broke a barrier by becoming the first African American athletics director in the university’s 101-year history.

There may not be any athletics for Jarmond to direct for the time being, but he still has a laundry list of concerns to address in the coming months.

Jarmond will inherit a department that ran a $19 million deficit in 2019 and was a central focus of the nationwide college admissions scandal earlier last year. UCLA football has finished below .500 for four seasons in a row – something it hadn’t done since the 1920s – and both the football and men’s basketball teams posted historically low attendance numbers this year.

To win back the fan base’s interest and trust that slowly faded away throughout Athletics Director Dan Guerrero’s 18-year tenure, UCLA needs fresh blood and a new perspective.

Luckily for the Bruin faithful, Jarmond checks off all the boxes.

The athletics director is certainly not as important to a team’s on-the-field success as a coaching staff or players, but Jarmond’s experience calling the shots for big-time football programs at Michigan State and Ohio State certainly doesn’t hurt. He was part of the search team that made former BCS champion Urban Meyer a Buckeye in 2012 and he almost single-handedly recruited Jeff Hafley to fill the head coaching vacancy at Boston College in December.

UCLA football coach Chip Kelly does have three years left on his contract, so Jarmond won’t have to conduct another search right off the bat. If or when the day comes that Kelly is kicked to the curb, however, Jarmond has shown that he knows exactly what he’s doing in that realm.

Men’s basketball just hired a new coach in Mick Cronin last year, and its 7-1 record down the stretch brought a buzz back to Pauley Pavilion, so Jarmond shouldn’t be expected to overhaul anything on the hardwood. But with his background as a former mid-major men’s basketball player at UNC Wilmington and position on the NCAA Division I Men’s Basketball Oversight Committee, Jarmond should know just how to manage the Bruins on the court.

Jarmond has more tangible concerns than changing team cultures, however, starting with the dollars and cents behind it all.

UCLA Athletics operated in the red for the first time since 2004 last year, and a lot of that had to do with the combined $16.4 million spent on buying out both former men’s basketball coach Steve Alford and former football coach Jim Mora in a 13-month span.

Solving the problem won’t be rocket science for Jarmond, who got his MBA from Ohio University and established himself as one of the best fundraisers on the East Coast during his time at Boston College.

When he first arrived in Chestnut Hill, Massachusetts, Jarmond set his new department a five-year, $150 million fundraising goal he dubbed “Greater Heights.” Corny, pun-based branding aside, Jarmond put donors’ money where his mouth was and raised more than $108 million in less than three years on campus – the most ever raised by an ACC program.

A 39-year-old charismatic leader can take a program a long way, and capitalizing on the sheer scale and reach of the Wooden Athletic Fund should be one of Jarmond’s top priorities. Another way to make back some money is a tactic Jarmond used to turn things around at Boston College – start selling alcohol in stadiums.

Jarmond organized Boston College’s first fan council to overhaul the on-campus game day experience, and the conclusion was to open up beer and wine sales at football and basketball games that fall. A similar program could be in the pipeline for Jarmond at UCLA if he wants to boost fan interest and profits simultaneously.

Putting the economics aside, Jarmond has some major decisions to make in terms of his staff and the program’s academics, both of which he seems fit to make.

UCLA released multiple statements following the Varsity Blues college admissions scandal claiming it would overhaul how it admits and evaluates student-athletes moving forward. Even with new policies possibly in place, administrators who have been tied to similar situations – such as senior associate athletic director Josh Rebholz – still hold major positions of power.

Chancellor Gene Block and the rest of the team searching for Guerrero’s successor knew enough to pass over Rebholz for the athletics director job, but Jarmond faces the tough decision of whether to keep him and other members of the old regime on his staff moving forward.

Jarmond ran a tight ship on the academic side at Boston College, as 12 Eagles teams finished in the top decile of their sport in the multiyear Academic Progress Rate rankings in 2019 – tied for third-most in the Football Bowl Subdivision. UCLA men’s basketball’s APR in 2019 placed them right on the cusp of a postseason ban, meaning there is a lot of room for improvement under Jarmond.

Finding the right balance between cleaning house and retaining familiarity behind the scenes is a tall task, but one Jarmond will have to grapple with immediately.

He has the right background, the right tools and the right ideas that can help take UCLA Athletics back to its former heights.

All that remains to be seen now is whether he’ll crumble under the pressure.