Battle of the Editors: UCLA’s most documentary-worthy sports storylines 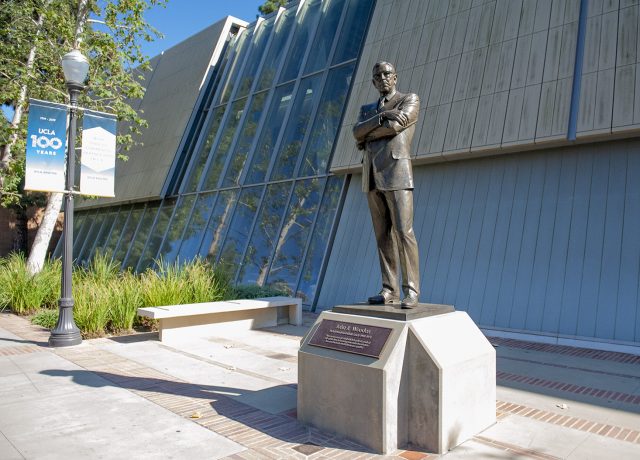 Much like the rest of the sports world, the Daily Bruin Sports editors spent the last five Sundays watching ESPN and Netflix’s 10-part documentary series, “The Last Dance.”

The 10-hour saga detailing the rise and fall of the Chicago Bulls’ dynasty with Michael Jordan earned national praise and set Twitter ablaze every week, and it has left audiences begging for more. ESPN has a lineup of 30 for 30 documentaries set to come out over the next few weeks – including ones based around the Lance Armstrong doping scandal and the 1998 MLB home run race – but the well will run dry by late June.

UCLA, which boasts 118 NCAA titles in its 101-year history, has dozens of stories waiting to be uncovered, and the Daily Bruin Sports editors made their pitches for which ones would make the best documentary or docuseries.

The greatest dynasty in basketball history didn’t play in Chicago, New York or Boston – it played in Los Angeles.

It wasn’t the Showtime Lakers, and it wasn’t led by Shaquille O’Neal or Kobe Bryant – no single player defined it or stole the spotlight.

It was UCLA men’s basketball under John Wooden, who coached the Bruins from 1948 to 1975 and has 10 rings and a handful of Hall of Fame alumni to show for it.

Pulling together key figures from a decades-long dynasty from almost 50 years ago would be a tall task for producers and directors to take on, especially since Wooden, guard Walt Hazzard and then-Athletics Director J.D. Morgan are all dead.

Filming a documentary series about a dead person complicates interviews, yes, but it isn’t exactly uncharted waters. Think of the countless historical documentaries that come out every year about World War II, the Roman Empire and ancient Egypt, not to mention more recent sports-related docs like 2019’s “What’s My Name” about Muhammad Ali.

Making a documentary about the Wooden-era Bruins doesn’t need new interviews with the Hall of Fame coach – it should focus on his legacy and how his dominance in the 1960s and 1970s has shaped the sport to this day.

That legacy extends from Wooden’s famous Pyramid of Success and big man factory that produced Kareem Abdul-Jabbar and Bill Walton to his ties with booster Sam Gilbert and fierce rivalries with Bob Knight and Digger Phelps.

Jordan said in episode seven of “The Last Dance” that winning has a price, one that not everyone is willing to pay. Wooden won 10 NCAA championships over the span of 12 years and became a legend for it.

I think I speak for a lot of UCLA fans when I say I would love to see a complete, top-to-bottom breakdown of how those titles came to fruition and how they changed college basketball forever.

What better candidate for a 10-part documentary than a man who spent 50 years coaching one team?

UCLA would go on to win at least two titles in each decade until the 2010s.

His teams made the playoffs in 49 of his 50 seasons, missing it just once in 2003. He also had a winning record in 49 campaigns. Since Scates left, his former player John Speraw has not been able to replicate the former’s success.

Scates himself was an All-American as a player for the Bruins. He also was on multiple USA teams that won titles, so his early playing career could be explored as well.

If the documentary were to follow the five-week format of “The Last Dance,” the decades would be a perfect splitting up point: the rise in the ’60s, the domination of the ’70s, ’80s and ’90s, and the slow decline in the 2000s until his retirement.

Winning isn’t everything. Sometimes, the best stories come out of failure.

That’s not to say that Jill Ellis’ career as the head coach of UCLA women’s soccer was a failure – in fact, her 229-45-14 record undoubtedly brought the program to the next level. She led the Bruins to their first ever College Cup in her second season, and then did it seven more times in a row from 2003-2009.

But during her 12 seasons in Westwood, Ellis never made it to the top.

UCLA placed in the top-10 nationally every season under Ellis, finishing second or third each year from 2003-2009, and still never brought home a trophy.

In a lot of ways, that’s more intriguing than a team winning the championship seven straight seasons. What went wrong? How did Ellis stay motivated? Was there any part of the coach that wanted to stay in Westwood another year – one more chance at a title – rather than moving on to coach the U.S. women’s national team?

Beyond the coaching staff, the Bruins boasted 14 NSCAA All-Americans from 1999-2010, many coming out of Ellis’ seven top-5 recruiting classes. Players such as Sydney Leroux and Lauren Cheney, both of whom went on to compete for USWNT, would make interesting sources for a documentary.

And finally, to tie the narrative together, the series could end with a look at current head coach Amanda Cromwell – who came to UCLA in 2013 and won the program’s first title right out of the gates.

Dave Roberts stole 109 bases during his three-year career as a Bruin. As a big-leaguer, he stole 243.

With the Boston Red Sox down 4-3 in the bottom of the ninth inning, trailing the New York Yankees 3-0 in Game Four of the American League Championship Series, the former Bruin entered the game as a pinch runner on first base. On the first pitch he saw, Roberts was off for second, diving head first as his left hand beat the tag of Yankees shortstop Derek Jeter.

The rest is quite simply history.

Roberts would come around to score, tying the game and setting the stage for the Red Sox to win seven straight games and their first World Series since 1918.

But the story of Roberts isn’t a Cinderella tale. The stars were not aligned in any way that would indicate Roberts would build the career he has today.

Roberts’ four-year career as a Bruin started with a walk-on tryout, impressing coaches – unsurprising, in hindsight – with his speed. Upon graduating in 1995, Roberts was drafted in the 28th round of the MLB draft to the Detroit Tigers.

And now as the current manager for the Dodgers since 2016, Roberts has led his team to four-consecutive first-place finishes in the National League West, and his team remains one of the favorites to again challenge for the Commissioner’s Trophy in the fall.

Selecting Roberts for a docuseries from a pool of UCLA baseball alums isn’t an obvious choice. He doesn’t carry the same legacy as Jackie Robinson, nor does he dominate the game like Gerrit Cole.

But Roberts is nonetheless an integral part of so many stories – for the Red Sox, for UCLA, for Los Angeles. The story of Dave Roberts is a part of baseball history and one that deserves celebration.

When producers are debating who to feature in sports documentaries, there are usually a few storylines that the writers are drawn to.

The underdog making their mark when others doubted them, off-field complications that were overcome and an eventual rise to the top are all staples of the classic sports story.

Well, all of these plot lines have been a part of Valorie Kondos Field’s time as the head coach of UCLA gymnastics, together making a story that the public deserves to witness in a docuseries.

Kondos Field, known as “Miss Val” to her team and the fans, had never competed in gymnastics when she took her first position of choreographer and assistant coach for the team in 1983. Coming from a dance background, Kondos Field brought a fresh perspective into the sport, incorporating dance into the gymnasts’ routines.

Winning her first championship in 1997 – six years after being promoted to head coach – Kondos Field quickly solidified UCLA’s status as a top contender in gymnastics, which has lasted to the present day.

In addition to the underdog success story Kondos Field was displaying in the gym, she also was facing challenges in the real world. Diagnosed with breast cancer in 2014, Kondos Field continued to coach the team while she fought and eventually beat the cancer.

Having won seven national championships in her 29 years as head coach to complete her status as one of the best gymnastics coaches ever, Kondos Field’s final season in 2019 was marked by a farewell tour that was credited with renewing public interest in the sport, making people eager to consume more gymnastics content across the country.

And one year on from her emotional retirement, this is the perfect time to showcase the woman who was named the “Pac-12 Gymnastics Coach of the Century,” and whose rise to the top is one of the best stories in sports history.