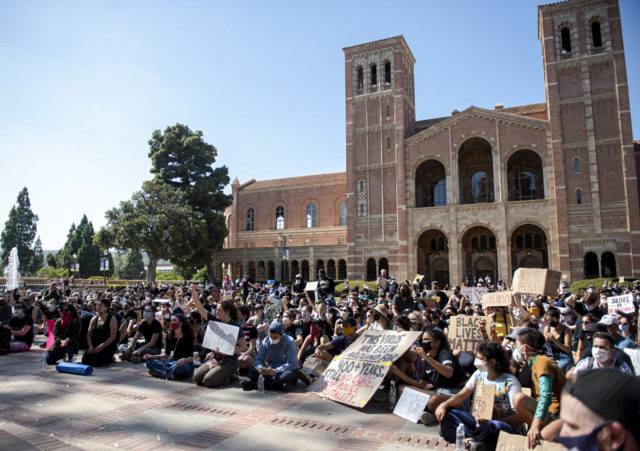 Correction: The original version of this article incorrectly stated UCLA media relations did not respond to request for comment. In fact, media relations was not originally contacted to respond to Shaw’s statement about Chancellor Gene Block.

This post was updated June 6 at 5:28 p.m. to reflect new statements from UCLA media relations.

Student leaders of two black student groups at UCLA co-hosted a demonstration in protest of police brutality on campus Thursday.

Hundreds of students, UCLA staff and Westwood community members gathered at Royce Hall, where student leaders spoke about their demands, then marched across campus to the UCPD’s UCLA headquarters.

The organizers, the Black Graduate Student Association of UCLA and Afrikan Student Union at UCLA, demanded the University of California postpone or modify final exams and fully fund a Black Resource Center at UCLA. They also asked that all UC campuses divest from the UCPD.

Thursday’s protest followed a string of protests across the city and country after George Floyd died May 25 in Minneapolis police custody.

Organizers also called for the arrest of officers involved in the deaths of black people in police custody and that the city of Los Angeles reallocate funding from policing and incarceration to education and employment programs. They also called for the dismissal of LAPD Chief Michael Moore and the removal of the National Guard from Westwood.

After a 60-second moment of silence for victims of police brutality, the crowd marched down Charles E. Young Drive past UCLA Murphy Hall. Several Santa Monica Big Blue Bus drivers pulled over in support of the marchers.

Trisden Shaw, president of the BGSA, spoke to the crowd in front of Royce Hall about the importance of nonviolence in communicating the protesters’ message.

“We have demands, and nothing or no one should be able to dilute that message, and that is what violence does,” said Shaw, a graduate student of African American studies. “We are here to expose this anti-blackness, which we see each and every day.”

“There’s a negligence of (Chancellor) Gene Block. … He may not be sufficient enough as a leader of the No. 1 public institution,” Shaw said. “We’ve been asking for a Black Resource Center, we’ve had a number of meetings with (Block). We have not had any type of progression, and I think enough is enough.”

Shaw said Block’s recent statement to the black community was a performative apology, and said the community will not be satisfied until action is taken.

UCLA is committed to working with ASU and BGSA to find resources for a Black Resource Center in the center of campus, said spokesperson Ricardo Vazquez in an emailed statement.

ASU Chair Alexandria Davis called on UCLA to investigate the LAPD’s use of the Jackie Robinson Stadium parking lot as a detention center Monday. She said demonstrators should continue to protest until these demands are met.

“The university has essentially failed us with a lack of support for final exams for students going through this time, but also the usage of a UCLA facility to detain and house folks,” Davis said. “We demand that UCLA does investigate, because they have a responsibility to their students.”

Naomi Riley, the 2020-2021 USAC president, said that her office is in full support of the protest and following the leadership of ASU and BGSA.

Riley said the protest addresses a pattern of brutality and discrimination within the police force in Los Angeles, extending beyond the deaths of George Floyd and Breonna Taylor.

“There’s research that shows that UCPD disproportionately targets students of color, specifically black students,” said Riley, a third-year political science student. “These are not random, isolated incidents. They’re incidents that occur all across the nation. … We should continue to support black students in any way that they deem necessary.”

UCPD declined to immediately respond to a request for comment.

“(We are) bringing attention to the systematic killings that have been happening due to state violence,” Cattouse said. “This has happened for years and years on end.”

Jung is the 2020-2021 assistant Enterprise editor. He is also a news reporter and photographer for the Daily Bruin. Jung is a second-year global studies and geography and environmental studies student.

Sherwood is the 2020-2021 Assistant News Editor for the City & Crime beat. She was previously a contributor for National News and Higher Education. She is a second year political science and communications student and digital humanities minor at UCLA.