While discovering my own voice, I learned the importance of amplifying others’ -30- 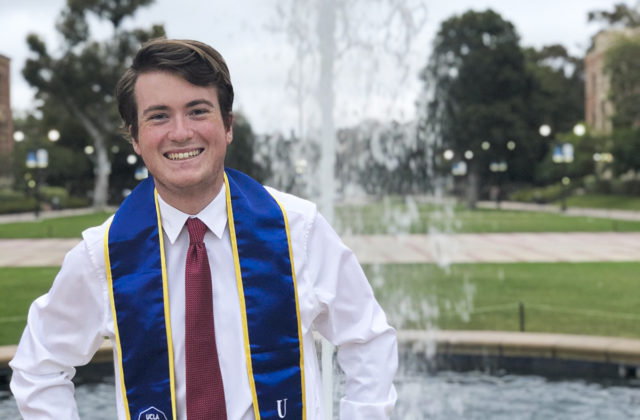 I am a proud UCLA reject. In 2016, I applied to UCLA as one of the top 10 students in my class, and it said no. My high school band director said I didn’t have a chance of getting into UCLA, and for a little while, he was right.

One month later, I appealed the decision. One month after that, admissions emailed me. It took two hours to muster enough courage to open the email, and when I did, my life would be ruled by a new, beautiful reality: I was going to be a Bruin.

And now, here I am, four years later, living in a reality as unfathomable now as it was for a then-17-year-old me: remotely graduating from UCLA as an English and political science double major student amid a global pandemic, the first person in my family to graduate from college.

My first year, I was an astrophysics student, partly because I had always been interested in science, and, as I later would discover, partly because I wanted to feel smart enough to be a Bruin, having not earned my spot the first time around.

Later that year, I rediscovered my love for writing and finally changed my major to English, embracing a truth about myself that had long been suppressed by an education system that had downplayed the arts and humanities and treated STEM as the only sensible option.

And then I joined the Daily Bruin.

Some of you Daily Bruin staffers might be asking yourselves who I am – after all, I haven’t been an incredibly active contributor, and I rarely had time to spend as much time as I would have liked in the office.

Working for a world-renowned undergraduate newspaper prompted deep introspection about what it means to fight for something you believe in. I have looked on in quiet admiration of so many editors, opinion writers and editors in chief as they have guided the Daily Bruin toward being a respected fixture of UCLA.

The impression the Daily Bruin made on me, even as someone who was less visible than other staffers, was profoundly formative and invaluable. Speak up and fight, especially when it’s difficult to do so and when pushback is inevitable.

I don’t think I really knew who I was before UCLA. College has a funny way of flipping the mirror back on yourself and making you look at who you are for all your strengths and flaws.

Four years ago, I shut myself in my car in my high school parking lot, wondering whether the person I saw in my mirror would ever become someone I could love and admire.

Although my journey is by no means complete, today I smile in mirrors more often than I avert my eyes.

But it’s the little daily victories that get you closer to those horizons: a professor telling you he admires your work, sharing a brief smile with a classmate, accidentally catching a sunset at the top of Janss Steps, getting stuck outside in the rain and laughing at your luck, even getting out of bed when it feels like the whole world is sitting on your chest.

COVID-19, as I have previously written, has obliterated so much and left seniors and nonseniors reeling backward with so little; it’s hard to not feel like mental health is in retrograde. But I do think we can all take solace in small daily victories and strive for the big ones, regardless of circumstance.

It feels a little bit selfish to write a column about myself right now, perhaps because #blacklivesmatter is trending, because major American cities are in flames, because George Floyd should still be alive, because a national COVID-19 death toll of more than 100,000 is far too high and because the sitting president openly called for protestors to be shot in the street.

But maybe now is also the perfect time to write a column. Especially amid crisis, we can all learn from journalists, whose responsibility it is to strive for the lofty principles that guide our writing.