Angelenos protest across the city in support of Black Lives Matter 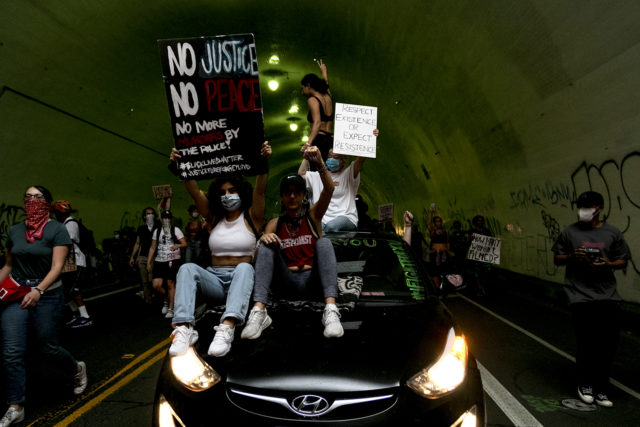 George Floyd, a 46-year old Black man, was killed by police officer Derek Chauvin on May 25 in Minneapolis.

When a video surfaced of Floyd’s death, protests against police brutality and in support of the Black Lives Matter movement broke out across the country and in Los Angeles.

Thousands of Black Lives Matter protesters marched down Third Street in what started out as a peaceful gathering on May 30. The protest later turned violent when LAPD officers arrived to confront the protesters.

Protesters set fire to a police car in the Fairfax District of Los Angeles on the second day of protests against police brutality and racial injustice. The Fairfax protest prompted LA Mayor Eric Garcetti to enforce a countywide curfew and California Gov. Gavin Newsom to deploy the California National Guard to LA.

These protests gave way to looting as people, including some who did not protest, broke into exposed storefronts. To prevent looting, workers boarded up businesses including this Whole Foods Market across the street from The Grove, a few blocks south of the protest. Black Lives Matter Los Angeles later distanced itself from the looting and violence.

On the second consecutive day of Garcetti’s curfew, UCLA students displayed a #BlackLivesMatter sign through their university apartment window in support of the movement against racial injustice.

In Westwood, hundreds of people gathered to protest June 1, despite the cancellation of the event by the original organizer, the Student Activist Project at UCLA.

As more and more protesters gathered at the intersection of Wilshire Boulevard and Veteran Avenue that day, the National Guard arrived to surveil the area. A few guards stood and watched from in front of the Federal Building.

A majority of the Westwood protesters stayed contained within the four corners of Wilshire Boulevard and Veteran Avenue, but some demonstrators made their way toward the 405 Freeway around 4 p.m. They stood atop the barrier of the freeway, shouting and holding signs, and eventually blocking a few lanes of traffic.

Police waited below the overpass leading to the 405 Freeway to arrest protesters who ran down the side of the freeway. Several officers pointed their guns at the protesters above.

Once the police officers had blockaded the 405 Freeway, they began firing rubber bullets and making arrests. Protesters ran from the freeway back toward Wilshire Boulevard, ducking to avoid getting hit and concluding the protest.

That night, officers rounded up a group of protesters breaking curfew on the corner of Selma Avenue and Cahuenga Boulevard in Hollywood. LAPD arrested at least 2,700 protesters on curfew charges before Garcetti lifted the curfew June 4, but only about 5% of those arrested were apprehended for looting stores, according to the Los Angeles Times.

The following morning on June 2, scores of LAPD officers pulled out of the area as the National Guard took over.

The protesters applauded the National Guard for listening to their complaints without threatening them – a stark departure from the LAPD, who arrested hundreds of protesters for breaking curfew just a block away the previous night.

On the night of June 3, a group of protesters sat in front of Los Angeles City Hall awaiting arrest as they willingly broke the curfew set by Garcetti. Surrounded by police officers, the protesters asked the news media present to film their arrests.

Black Lives Matter LA later filed a lawsuit against the LAPD, accusing the police of violating the protesters’ civil rights by holding them without access to food, water or restrooms for several hours at a time.

On June 4, 10 days after the death of George Floyd, local muralist Robert Vargas painted a memorial dedicated to Floyd in Downtown Los Angeles. In the presence of the National Guard, Vargas painted the mural on plywood panels meant to deter looters. One of Vargas’ signature works, “Our Lady of DTLA,” could be seen across the street from the new mural.

That afternoon, the Black Graduate Student Association at UCLA and the Afrikan Student Union at UCLA organized a protest that started at Royce Hall and stopped at the UCPD’s UCLA headquarters. Protesters raised their hands above their heads while chanting, “Hands up, don’t shoot.”

UCLA’s first on-campus protest ended with demonstrators marching back to Dickson Court. They gathered in front of Powell Library to listen to speeches from incoming graduate student Mason Foster and president of the Black Graduate Student Association, Trisden Shaw.

The day before, Garcetti had announced a $100 million to $150 million budget cut from the LAPD to reinvest in communities of color.

Protesters in the Second Street Tunnel in Downtown LA said the roughly 5% to 8% cut from the LAPD’s annual $1.8 billion budget was not enough and demanded that the City Council reduce funding for the police department.

The following day, LAPD Chief Michel Moore attempted dialogue with protesters after holding a police vigil for the death of Floyd.

The protesters mostly did not participate in the vigil and demanded Moore commit to addressing LAPD’s own history of police violence and racial injustice. Moore told protestors that he would try but stopped short of promising change.

Back in Westwood, dozens of medical staff at Ronald Reagan UCLA Medical Center marched in solidarity with the Black Lives Matter movement.

On June 6, demonstrators blocked the crossroads of Wilshire Boulevard and Veteran Avenue by lying down on their stomachs on the street. This peaceful protest on June 6 was planned by the Islamic Circle of North America Council for Social Justice, a Muslim civil rights advocacy group.

In Hollywood that night, the protest turned into a miniconcert and dance party as a truck with a DJ and guitarist onboard led a caravan down Hollywood Boulevard.

More than 20,000 people marched down Hollywood Boulevard on Sunday in the largest Black Lives Matter protest in Los Angeles since the Minneapolis police killed Floyd on May 25.

Protestors placed flowers and candles in the middle of the street at a makeshift memorial for Breonna Taylor and other victims of police brutality.

A protester waved a black-and-white American flag at the intersection of Hollywood Blvd. & Highland Ave., a major tourist destination and Hollywood landmark. Some activists have claimed monochrome variations of the Star-Spangled Banner for the Black rights movement.

That evening, a majority of the National Guard troops departed from Los Angeles, as protests were deemed less violent by Garcetti.

Pallbearers lifted a casket out of a hearse during a solidarity funeral procession for Floyd in front of the Los Angeles City Hall on Monday, two weeks after Floyd’s death.

The actual public viewing for Floyd was held on the same day in Houston, Floyd’s hometown. A total of four caskets from four different processions were arranged in a cross as leaders from various religious denominations led the crowd in prayer and mourning.

Following these recent protests, the LAPD opened 56 investigations of officer misconduct, 28 of which involve the alleged use of force. Protests in support of the Black Lives Matter movement continue to take place across Los Angeles as protestors demand justice for the victims of police violence and demand action from government officials.

Lopez was a senior staff photographer from 2019-2020. He was previously an Assistant Photo editor from 2018-2019. He likes portraiture and sports photography.

Coffman is the 2019-2020 Video producer and former Assistant Photo editor. She is a fourth-year psychology student with a film minor.