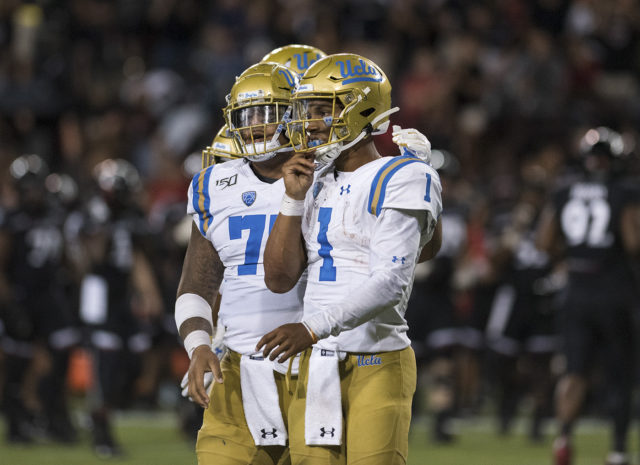 Members of the UCLA football program demanded better protection for student-athletes when they return to campus for mandatory workouts during the COVID-19 pandemic in a letter to the program Friday.

The letter, signed by 30 current players – including incoming junior quarterback Dorian Thompson-Robinson – expresses doubt over the program’s ability to support the student-athletes under these circumstances with mandatory training looming July 6.

“Time and time again, we see individuals within Athletic programs who ought to defend and protect us, leave us in the dark to fend for ourselves,” the letter said. “Starting with neglected and mismanaged injury cases, to a now mismanaged Covid-19 pandemic, our voices have been continuously muffled, and we will no longer stand for such blatant injustices.”

The players also call for “whistleblower protections” for both athletes and coaches who wish to report violations of said guidelines without repercussions such as loss of scholarship or retaliation from members of the coaching staff.

The letter states that if the demands are not met, the players will withdraw from all promotional events for the program.

“These demands reflect our call for an environment in which we do not feel pressured to return to competition, and if we choose not to return, that our decision will be respected,” the letter said.

This public action comes after former defensive end Elijah Wade – who medically retired from football this spring and is now a general representative on the Undergraduate Students Association Council – passed a resolution that aimed to provide better protection for student-athletes upon their return to campus. Wade is also listed as an author on the letter.

In response to the letter’s publication, Thompson-Robinson tweeted that the majority of the players in the program talked about the demands, but only the 30 players were willing to put their names on it publicly.

According to a report from The Athletic’s Bruce Feldman, new athletics director Martin Jarmond and coach Chip Kelly met with the team to discuss the letter.

Jarmond said in a tweet that the team grew from the conversation.

“Candid and healthy dialogue with @UCLAFootball student athletes, coaches and staff today,” Jarmond said in the tweet. “We have addressed some concerns that were shared and will continue to encourage communication. We got better today.”

On Wednesday, UCLA Athletics announced that football players will be allowed back on campus June 22 as part of phase one of its four-phase “Return to Training” process.

UCLA Athletics did not respond to requests for comment on the situation.