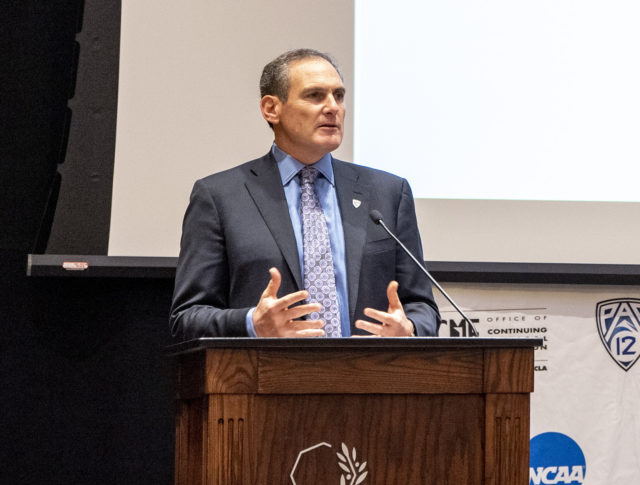 This post was updated to include a clarified headline July 10 at 6:01 p.m.

The Bruins will be playing within the conference for the foreseeable future.

The Pac-12 announced that the league will have a conference-only schedule for fall sports during the 2020 season. The move impacts football, men’s and women’s soccer and women’s volleyball directly, while other fall sports were not named in the press release.

According to the statement, the conference still hopes to move ahead with fall sports with the authorization of state and local officials.

“The CEO Group made clear that it hopes to play football and all other fall sports provided that it can meet the health and safety needs of its student-athletes and obtain appropriate permissions from state and local health authorities,” the statement read. “The decision is effective immediately across all Pac-12 member universities and was made following a meeting of the Pac-12 CEO Group earlier today.”

The conference also released a statement later Friday, announcing Pac-12 Commissioner Larry Scott had tested positive for COVID-19 and is currently self-quarantining. It also noted that he is continuing to perform all his duties remotely.

The news comes a day after the Big Ten made the same move for its sports Thursday, canceling multiple matchups between the two leagues in the fall. The Ivy League took a different approach this week, canceling all sports until at least January.

While the specifics of the schedule have not yet come out, UCLA football would cancel games against San Diego State, Hawai’i and New Mexico State this year. These contests may be replaced by Oregon and Washington, the only two Pac-12 teams UCLA was not scheduled to face during conference play.

The Pac-12 hopes to keep contact limited to just its member schools in order to control protocols across every game. This is why the Bruins will be allowed to head all the way to Colorado or Oregon but not play in nearby San Diego.

The other affected UCLA teams have not yet released their schedules. However, the statement notes the decision will push back opening dates for practice and competitions, as the conference cited the recent uptick in COVID-19 cases as the reason to push back any plans for the upcoming year.