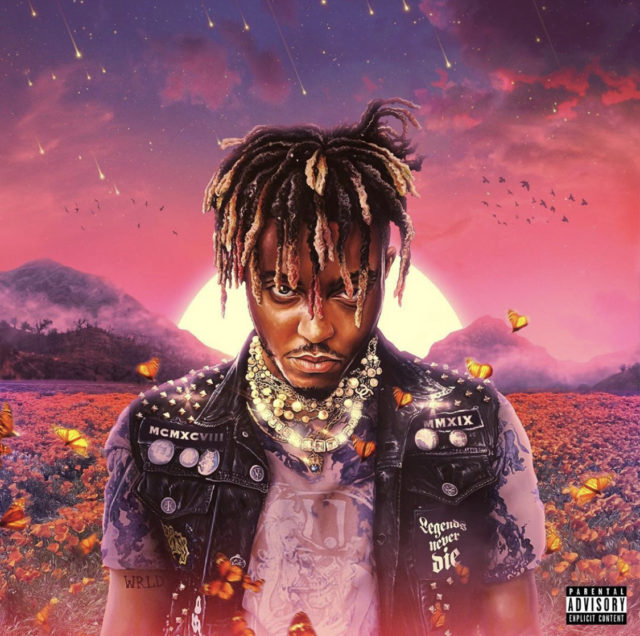 (Courtesy of Grade A Productions/Interscope Records)

The 21-song album packages Soundcloud-era Juice WRLD freestyles with features from guest artists Trippie Redd, Polo G, Halsey and Marshmello. While the songs largely touch on themes of living with anxiety and abusing substances as a coping mechanism, the album remains true to Juice WRLD’s trademark upbeat and catchy sound. The enticing combination presents his internal struggles in a familiar way, easing listeners into touchy subjects. The late rapper recorded more unreleased songs prior to his overdose, and this release is just a taste of some of his best work, according to his family.

Commencing with a minute-long spoken intro titled “Anxiety,” the track sets a positive tone of self-acceptance and sheds light on issues like substance abuse and anxiety that transcend materialism. Juice WRLD affirms his place in the world, professing “I don’t know, music is just a beautiful thing, like I love myself so much, as far as the way I make music, the way God made me.”

Despite not being able to curate the tracklist himself, “Legends Never Die” amplifies the themes Juice WRLD presented in his earlier works. Following his first two albums “Goodbye & Good Riddance” and “Death Race for Love,” this release is united by the struggles of drug abuse, ever-present anxiety and a search for true love, cloaked in both religious metaphors and heavy-hitting beats.

[Related: Album review: The Weeknd authentically portrays heartache over past heartbreak in ‘After Hours’]

In the second track, “Conversations,” Juice WRLD avoids an exchange with the devil, portraying his mind as a hellish environment as he confidently raps, “Chillin’ in my head, but it’s hot / Flames everywhere, I see Satan.” He aptly uses Satan as a metaphor for his anxiety, analogizing coping with a mental illness to dealing with demons.

“Titanic” follows suit as Juice WRLD reflects on the insecurities of earning fame and risking it all because of his substance abuse and deteriorating mental health. He proclaims “I’m Titanic” in the chorus, comparing himself to a sinking ship that is drowning in codeine, a prescription opioid. The religious allusions are not forgotten, as the rapper claims God is watching over him while he screams out in prayer, backed by fast-paced beats, echoed vocals and converging lyrics.

These religious undertones are perhaps most evident on “Righteous,” the first single released posthumously by Juice WRLD’s estate. The rapper portrays himself as pure, holy and angelic by referencing his white Gucci suit. In a direct reference to a Bible verse about overflowing abundance, Juice WRLD softly states, “Codeine runneth over on my nightstand” to righteously justify using substances to smother his “demons,” – the same practice that led to his eventual overdose.

In an electrifying shift in tone, the guest artists steer both the instrumentals and the lyricism in different directions than the previous songs. The cluster of features toward the middle of the album sets off a dazzling firework of offbeat heartthrob Trippie Redd, genre-defying songwriter Halsey and EDM genius Marshmello. These more mainstream-sounding songs alleviate the deafening loneliness of an otherwise solo album in which Juice WRLD explores his internal battles.

Trippie Redd’s feature and the other single off the album, “Tell Me U Luv Me,” is a ballad to a romance filled with drugs and hope for a better future. It expands upon the theme of unconditional love, potentially referencing his longtime girlfriend Ally Lotti as the track was released for her birthday. At first, this song’s fast pace is overwhelming, but its catchy repetition of the titular phrase is hard to forget.

Sandwiched in between guest artist features, the brief interlude “Get Through It,” is a direct message to anyone listening as Juice WRLD hopes and prays they will overcome any obstacles they might be facing. The softness of the track comes in stark contrast to “Come & Go,” a Marshmello feature that is more evocative of a thrilling EDM show.

The album stabilizes sonically in its latter half and provides some closure to those who are grieving Juice WRLD’s death. With each song just around two to three minutes in length, the remainder of the album is more cohesive with the same themes of drugs, love and self-acceptance that are reminiscent of earlier songs. By returning to the beloved sound cherished by his fans, the final tracks pay homage to the rapper’s classic Soundcloud freestyles.

As the album’s title states, “Legends Never Die,” and Juice’s legacy lives on in his catchy flows and familiar choruses.

Mehra is currently the Photo Editor for the Daily Bruin. Previously, she was an Assistant Photo editor on the Arts & Entertainment beat in addition to writing for The Quad. She is also pursuing a B.A. in psychology with minors in anthropology and global studies.