The Quad: How Trump administration’s revoked immigration policies would have affected students 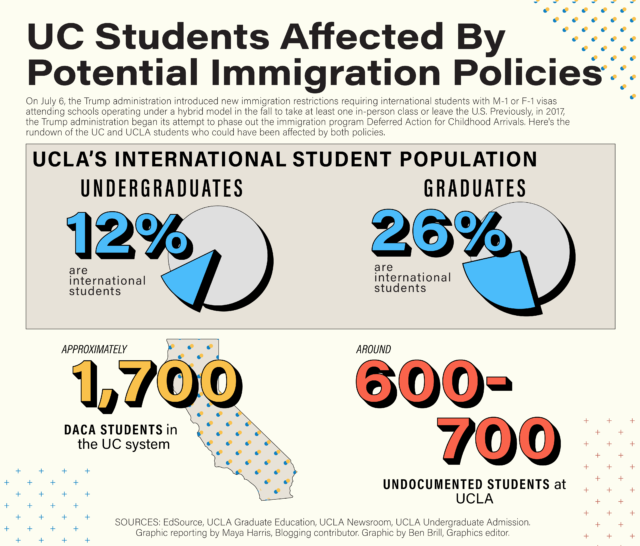 In case the pandemic hasn’t been overwhelming enough, international students in the U.S. recently faced a new level of challenge and uncertainty – possible deportation.

The Trump administration decided July 6 to implement new immigration restrictions requiring international students with M-1 or F-1 visas attending a school operating under a hybrid model for the fall to take at least one in-person class or risk deportation. This spurred the University of California to file its second lawsuit against the Trump administration, the first occurring in 2017 when the UC decided to challenge the administration’s decision to end the Deferred Action for Childhood Arrivals program. However, unlike the 2017 lawsuit, which was resolved just last month, the new restrictions targeting international students were quickly rescinded.

Here, we look at the impact these immigration restrictions would have had and examine some of the ways the two lawsuits parallel one another.

On July 8, the UC announced its decision to sue the Department of Homeland Security and requested a restraining order against U.S. Immigration and Customs Enforcement to block immediate deportations of international students. Non-U.S. citizens currently constitute around 12% of UCLA’s undergraduate student body and 26% of its graduate student body.

Then, after a week of uncertainty and resistance from universities and states across the nation, the federal government agreed Tuesday to rescind the policy.

As previously mentioned, this lawsuit wasn’t the first of its kind. In September 2017, the UC filed a lawsuit against the DHS in response to Trump’s June 2017 cancellation of DACA, a program created under the Obama administration to protect undocumented individuals who had immigrated to the U.S. as children. The UC was the first university to bring a case against the DHS after the Trump administration announced its decision to end the program.

According to U.S. Citizenship and Immigration Services, DACA protects around 650,000 immigrants who arrived illegally in the U.S. as children as of June 2019, including approximately 1,700 students enrolled in various campuses across the UC system. In fact, UC President Janet Napolitano helped create the DACA program in her previous role as secretary of the DHS from 2009 to 2013.

Parallel to the 2020 case, the UC cited in the DACA lawsuit ICE’s failure to follow the Administrative Procedure Act, which controls the procedures through which federal agencies can create and implement regulations.

The UC’s 2017 case against the DHS reached the Supreme Court in November 2019 and was settled in favor of the UC last month. In light of this decision, the USCIS was supposed to resume accepting DACA renewals and first-time applications. However, the National Immigration Law Center warned at the time that this decision does not prevent the Trump administration from taking action to stop applications again in the future.

Now, nearly a month after the Supreme Court’s decision to uphold the legality of the program, the Trump administration has yet to resume accepting first-time DACA applicants.

The decision to uphold DACA wasn’t reached until over two years after Trump first announced his intention to end the program. In contrast, the recent legal dispute over immigration restrictions was resolved in just over a week. Some believe that this difference boils down to the political significance of the respective cases.

Although the Trump campaign ran on a platform of broadly restricting immigration, DACA recipients were a specific and contentious target that highlighted divisions along party lines. According to a Pew Research Center survey conducted shortly after the Supreme Court began evaluating the Trump administration’s decision to end DACA, 82% of Democrats and Democratic-leaning independents thought that finding a way for most illegal immigrants to gain legal status in the U.S. was an important priority, while only 48% of Republicans and Republican-leaning independents said the same.

On the other hand, the recently rescinded immigration policy was mixed with concerns over public health and safety, with some sources – like a message from the Harvard University Office of the President – theorizing that the Trump administration was using the in-person class requirement to pressure universities into opening their campuses sooner.

Simran Kumari, a graduate student in chemical engineering from India, speculated that monetary issues may have also pushed the rapid resolution.

“All these schools have so many international students, and if they have to go back, of course they wouldn’t be paying to stay here,” Kumari said.

According to the National Foundation for American Policy, international students make up a majority of enrollment in many graduate STEM programs in the U.S., with their numbers increasing faster than domestic students enrolled in the same programs. Kumari’s cohort reflects this trend: 14 out of the 15 students in her program are from abroad.

Because of the broader issues of COVID-19 and the lockdown of borders, some students were skeptical that the policy would go through. A day before the policy was rescinded, Yanqin Li, a third-year psychology student from China, said she thought logistical barriers would make it unrealistic for the federal government to act on the new restrictions.

“I don’t feel that it’s easy to deport international students, so I don’t think that this will actually come true,” Li said.

She explained that it is difficult to travel back to China at this time because the country has implemented a travel ban, making airplane tickets extremely expensive and hard to buy.

Although the UC and other universities reacted quickly to protect their international students from the recent immigration policy changes, Bruins from abroad still struggled to make plans for an uncertain future before the situation was resolved.

Chinatsu Okinaka, a third-year theater student from Japan, decided to take a year off from her studies at UCLA after the Trump administration initially announced the new immigration restrictions.

Having made her decision to take a year off, Okinaka was primarily concerned about when she could graduate and get a job. She explained that this was particularly difficult for someone from Japan.

“You graduate college at age 22 then get a job, that’s very typical for Japanese students, but I can’t do that anymore,” Okinaka said.

Okinaka also said that she was uncertain when she would be able to obtain another visa to continue her studies at UCLA, considering that the U.S. embassy in Japan has stopped accepting applications at this time.

Kangze Shen, a graduate student in chemical engineering who is from China, said that he believed it was a mistake for the Trump administration to push anti-immigrant policies such as the recent one targeting students from abroad.

“The U.S. should welcome international students because they pay much more than in-state and U.S. students, they rent apartments and make contributions to the whole economy,” Shen said.

Shen also said that he doubts the U.S. will become more welcoming toward international students while Trump remains president.

Shen’s skepticism mirrors the continued uncertainty regarding the status of DACA recipients and undocumented immigrants in the U.S.

“When you are an immigrant in this country, you have to worry about everything,” Kumari said. “You have to live here with the constant fear that anything can happen.”

In the months prior to the Supreme Court’s decision over the status of DACA, the UC worked to create ways to allow DACA recipients to finish their education in the event that the Trump administration’s reversal of the program was upheld. In addition, the UC urged students with DACA status to apply for renewal before the Trump administration’s decision would potentially take effect.

As for the UC’s recent actions to support international students, Li said that she felt supported and excited about the UC’s lawsuit against the DHS. Shortly after the policy was rescinded, Li said in a text message that she was ready to start her new life at her apartment.

“UCLA is very famous, so we were planning to get really good jobs in Japan,” Okinaka said. “We came to UCLA to change our lives.”