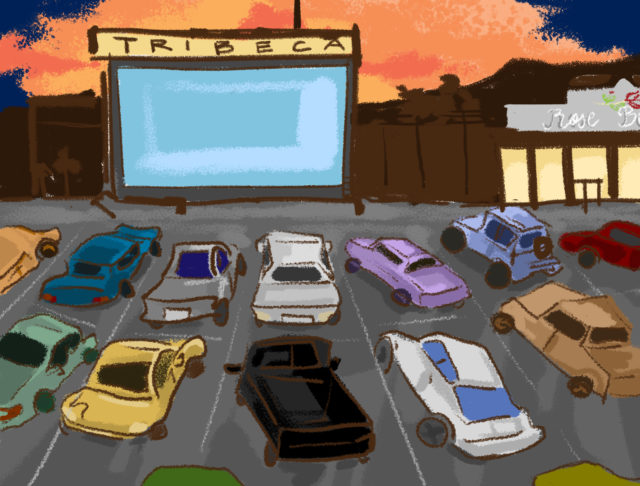 Instead of watching football games at the Rose Bowl, crowds have gathered for a safer source of entertainment.

The sports stadium has been transformed into a drive-in movie theater this month for the Tribeca Drive-In series. Organized by Tribeca Enterprises and its multiple partners including AT&T and IMAX, the Los Angeles location has since featured screenings of classic and popular films such as “Jaws,” “The Dark Knight” and “Mean Girls,” as well as multiple short films and live stand-up comedy performances. Tribeca’s chief content officer, Paula Weinstein, said tickets were sold per vehicle, and hundreds of cars attended each show while also being spaced six feet apart to maintain a safe viewing experience.

Though the pandemic prevented Tribeca from holding its annual film festival, drive-in screenings seemed like the perfect way for movies to continue bringing people together, said Cara Cusumano, the festival director.

“The Tribeca Film Festival was founded after 9/11, and our founding mission was really about how movies and storytelling can bring people together in a time of crisis,” Cusumano said. “We felt a sort of renewed commitment to that mission right now.”

[Related: Student to showcase etiquette as a moral code through music at exploratory voice festival]

While curating the films shown at the drive-ins, she said the programmers looked back at the movies they grew up with and brainstormed films such as crowd-pleasing comedies or iconic sports movies that would best fit a theatrical, big-screen experience.

In addition, the programmers also considered the themes of films, Weinstein said. For example, the drive-in held a “girls’ night out” themed event featuring “Mean Girls” and “Girls Trip.”

“We really tried to pair films the (same) way that we do it at our film festivals and considered what they’re about, why they should be together and the different kinds of audiences we hoped to attract,” Weinstein said.

While organizing the drive-in series, she said their team wanted to reach out to the local community and learn how they could support them through the events. One way they did this was by inviting independent food trucks to sell food at the movie screenings.

Weinstein said Tribeca also recognized the concerns of other drive-in theaters who felt as though the organization was competing with their businesses. In response, she said her team reached out to independent drive-in theaters and offered the Tribeca Drive-In programming if they wanted it, and also made sure the series’ locations were not too close to other drive-ins to avoid interfering with their business.

“We reached out to all the independent drive-ins because this is what they do for a living, and we have great respect for them,” Weinstein said.

One of the comedians, Ester Steinberg, said some of the cars at her performance were miked up, allowing her to actually hear the laughs from the cars. Another comedian, Erica Rhodes, said the cars in the back that had no microphones began honking to communicate laughter, which soon caught on throughout the whole crowd. Rhodes said the drive-in had also set up a large projector screen on the stage behind her, which allowed her to do subtle facial expressions and gestures that enhanced her performance.

“Comedy and telling jokes is really a rhythm with the audience,” Steinberg said. “It’s like having a conversation with someone, but the other person can only laugh … if you get no feedback, the art form barely exists.”

Daniel Webb, another featured comedian, said performing in front of a drive-in audience presented a challenge to his usual recipe for building energy with his viewers. While he could directly see his audience in a traditional stand-up setting, he said a drive-in crowd had more options regarding what they could do if they grew bored of the show because they have the privacy of their cars.

“One of the oldest things in the world is getting a group of people together to share your art form – it’s as old as the hills, and nothing will really replace that,” Webb said. “That kind of performative, creative gathering and sharing is in our DNA, and that will always be the organic thing to me.”

On top of providing a space for artistic exchange, Weinstein said the ultimate goal of the Tribeca Drive-In series is to provide people with a safe yet exciting moviegoing experience despite the restrictions COVID-19 has placed on their regular activities. Furthermore, she said the organizers hope to remind attendees of how special going to the movies is, encouraging them to visit and support their local theaters when they are able to reopen. As for the series’ near future, Cusumano said Tribeca is currently working with Walmart to program outdoor movie experiences at its different store locations across the nation.

“Hopefully, one of the lasting influences of everything that’s going on is that people are more open to these kinds of different ways to see movies,” Cusumano said. “I would love to see outdoor screenings as more of an everyday part of how we go to the movies, even beyond just this particular moment.”