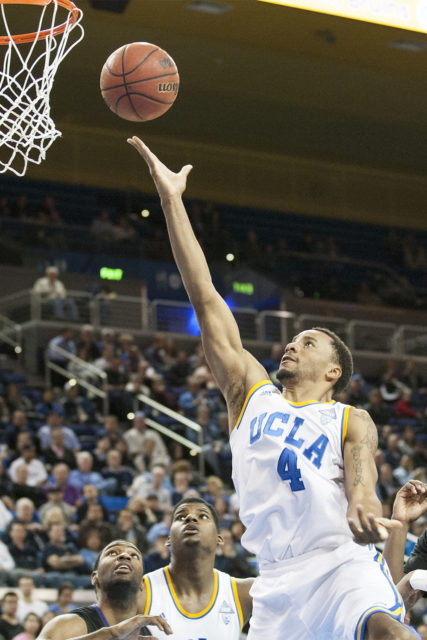 After four years with the Bruins, former UCLA men's basketball guard Norman Powell (2011-2015) already has one NBA championship and is already a quarter of the way to another one this season. (Daily Bruin file photo)

Guard Norman Powell – a Bruin from 2011-2015 – won a championship ring last season with the Toronto Raptors, and is already a quarter of the way to doing so again this season.

The team from the North swept a short-handed Brooklyn Nets squad in the best of seven series, winning by an average margin of over 20 points per game.

In the first three games of the series, Powell played an average of 24 minutes a night and scored 13.7 points per contest.

In the final game of the series Sunday, Powell turned it up a notch.

An injury to starting guard Kyle Lowry increased Powell’s touches, and he took full advantage. Powell led the team with 29 points and grabbed five rebounds in the 150-122 victory.

Powell was also part of a historic bench performance from the Raptors in the series-clinching game, with the reserves scoring 100 points, the most ever by an NBA bench in a single game – both playoffs and regular season – since the stat was tracked.

If Lowry misses any more time, Powell could see an increased role when the Raptors continue their title defense against the Boston Celtics in the second round starting Thursday.

Entering Thursday, the first-place Seattle Storm were riding a nine-game winning streak, looking to make it 10 against the Indiana Fever.

Kennedy Burke made sure the Storm didn’t reach double digits.

Burke was just one of eight players available for the Fever, as much of the roster was out due to injury. In her first start of the season, the guard led the Fever with a career-high 23 points in 30 minutes as Indiana took down Seattle 90-84.

The former Bruin has been a key bench piece for the Fever in the WNBA bubble, averaging 7.2 points per game on nearly 50% shooting from the field.

Indiana is currently a half game above the Dallas Wings for the eighth and final postseason spot with nine games left on its regular season schedule.

From 2014 to 2016, two of the three NCAA men’s tennis singles champions played in Westwood.

Now, those two former Bruins are matching up in the pros.

The @uclatennis face-off comes to an end.@marcos_giron93 knocks out McDonald in straight sets at #CInCyTENNIS and enters the Top 100. pic.twitter.com/0hl5MiNWP9

Giron’s run ended Monday in the second round when he was defeated by the fifth-ranked player in the world, Daniil Medvedev.

In his 179 career games as a Bruin from 2006 to 2008, San Francisco Giants shortstop Brandon Crawford hit just 20 home runs.

Despite not being known for his power, Crawford reached a powerful milestone at the big league level Thursday night. He became just the third Giant shortstop ever to hit 100 home runs in his career on a solo shot to the opposite field in San Francisco’s 10-5 victory over the Los Angeles Angels.

The 2020 season as a whole has been a struggle for Crawford, who is batting just .235 – which would be the third-lowest mark of his career – with two home runs and eight runs batted in. The two-time All-Star has also seen his playing time diminished, splitting time with other shortstops and seeing at-bats almost exclusively against right-handed pitching for the first time in his 10-year career.

Starting pitcher Trevor Bauer, on the other hand, seems to keep getting better with age.

For the second time this season, the UCLA alumnus pitched a complete game shutout en route to a Cincinnati Reds victory in a doubleheader-shortened seven-inning game. On Wednesday, Bauer allowed just one hit to go along with three walks and nine strikeouts as the Reds beat the Kansas City Royals 5-0.

Bauer blanked the Royals while wearing an undershirt commemorating his infamous temper-fueled throw over the centerfield wall last time he played in Kansas City.

With the win Wednesday, Bauer improved his record to 3-0, lowered his MLB-leading ERA to 0.68 and brought his strikeout total to 41 on the season – a franchise record through four starts.

Bauer will look to continue this dominance and pick up his second win against the Milwaukee Brewers this season on Monday.

After getting knocked out in the quarterfinals of the National Women’s Soccer League’s Challenge Cup with the North Carolina Courage in July, Sam Mewis began the trend of American women’s soccer players signing overseas this summer.

The midfielder joined Manchester City of the FA Women’s Super League at the start of August, and in her first pre-season game with the club, she scored one goal and contributed two assists in just 45 minutes. Manchester City beat rival Everton 4-1 to begin its pre-season fixtures.

Watch the full highlights of @sammymewy's debut with — and first goal for — Man City here! 🤩

Mewis played four seasons with UCLA – from 2011-2014 – where she helped guide the Bruins to their only national championship in 2013 and won a plethora of individual honors. She was drafted to the NWSL in 2015 and has been part of the United States Women’s National Team since 2016.