UCLA files lawsuit against Under Armour for breaking $280 million contract 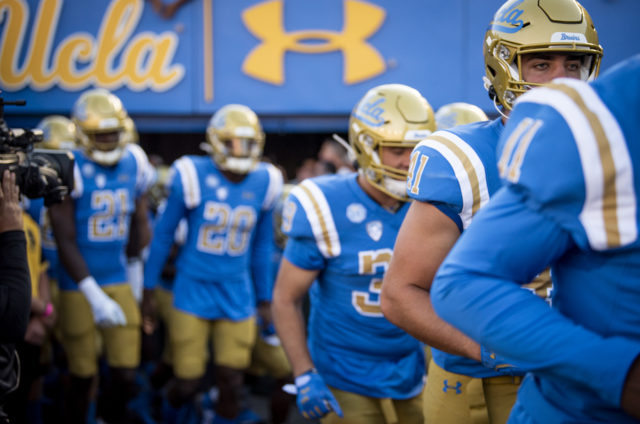 Under Armour, whose logo is found on UCLA’s jerseys, announced it was terminating its branding agreement with the university in June. UCLA responded by filing a lawsuit for breach of contract Wednesday. (Kanishka Mehra/Photo editor)

This post was updated Aug. 26 at 8:35 p.m. to include a statement from Under Armour.

UCLA is suing Under Armour for breach of contract, according to a lawsuit filed by the school in the District Court in California.

Under Armour announced its intention to terminate its contract with the University in June and the two sides attempted to mediate a solution, but those talks failed.

The lawsuit states Under Armour is a “troubled company,” and used the COVID-19 pandemic as a cover to get out of the deal it couldn’t afford and now owes the school over $200 million.

“It is unfortunate that Under Armour is opportunistically using the global pandemic to try to walk away from a binding agreement it made in 2016 but no longer likes,” said UCLA vice chancellor for strategic communications Mary Osako in an emailed statement. “UCLA has met the terms of the agreement, which does not require that games in any sport be played on a particular schedule.”

The lawsuit states that Under Armour has no legal grounds for termination.

Under Armour later responded in an emailed statement.

“While we are disappointed that UCLA elected to file suit, we are confident in our position and will defend it vigorously,” the statement said. “We sought and remain open to working out a reasonable and appropriate transition for the university, and most importantly for the student-athletes. In fact, at UCLA’s request after the termination of the agreement, Under Armour continued to deliver athletic products for the 2020-2021 school year because we support athletes, even as it remains uncertain when sports will resume.”

The original 15-year, $280 million deal between the two was the largest apparel deal in all of college athletics.

In June, Under Armour stated its desire to get out of the deal because UCLA was at fault for not living up to its end of the agreement.

“Under Armour has recently made the difficult decision to discontinue our partnership with UCLA, as we have been paying for marketing benefits that we have not received for an extended time period,” Under Armour’s statement read. “The agreement allows us to terminate in such an event and we are exercising that right.”

UCLA Athletics is already facing a $19 million budget deficit, and with Pac-12 competition shutting down for the rest of the calendar year, that number could grow.

“We filed this lawsuit in order to support our student-athletes and the broader UCLA community, including the athletic department that has brought 118 national championships to Westwood,” Osako’s statement read.