Crew, cast behind ‘BoJack Horseman’ discuss their individual impacts on the show 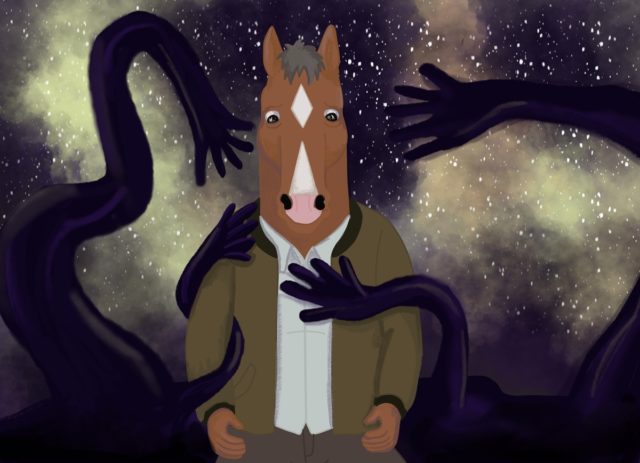 What is this, a crossover episode?

The final season of “BoJack Horseman” is a heyday of the dead – over a final meal of pills and cocaine served by waiter Zach Braff, the titular horse breaks bread with his past in “The View From Halfway Down.”

The episode, directed by UCLA alumna Amy Winfrey, earned an Emmy nomination for Outstanding Animated Program and uses absurdism to wash down its uncomfortable, often too relatable themes. Meanwhile, the animation itself – a vehicle for visual easter eggs and puns galore – celebrates the idiosyncrasies of the animators who brought BoJack to life over six seasons, she said.

“Stylizing things allows you to take something very profound and make it more palatable,” Winfrey said. “That can be a problem in that BoJack seems lovable, but if you add up everything he’s ever done, you realize he’s a terrible person. But there’s something nice about that level of disconnect that makes him special.”

Many of BoJack’s vices stem from intergenerational trauma and his relationship with his mother Beatrice, voiced by Wendie Malick. Resurrected in “The View From Halfway Down,” Beatrice is reliable in her shrewish nature – overcritical without affection and eternally preserved that way in BoJack’s memory, Malick said.

“You see two broken people who could be there for each other, but they don’t have the capacity,” Malick said. “The break is just too severe.”

A vignette in a previous season – which takes place in the mind of Beatrice, who has dementia – parallels the internality of “The View From Halfway Down,” Malick said. In it, BoJack’s presumed daughter Hollyhock’s (Aparna Nancherla) true paternity is revealed as Beatrice remembers her husband’s affair – but his lover’s face is inscrutable, violently scratched out by a tangle of black scribbles.

Mike Hollingsworth, the supervising director, said the stylistic choice in the scene served a two-fold purpose: to subvert expectations for the season’s dramatic reveal and to satisfy budget constraints. While fully formed faces required building mouth packs and blanks, a scribbled-out one was a four-drawing cycle that could be pulled straight from the storyboard, he said.

Similarly, Winfrey said shots with varied angles were often time-consuming to animate. When BoJack’s friend Todd (Aaron Paul) is surrounded by his posse of clown dentists, Winfrey opted to turn the lights off to imply the presence of different angles without having to animate them.

Although episodes were delivered on a rolling basis, with five or six in the animatic stage at any given time, the storyboard process itself took about a month, she said. Comparatively, when working as an animator for “South Park” from a sperm bank in Westwood, Winfrey said the storyboarding and animation stages were finished within a single week.

For one particularly grueling Princess Carolyn (Amy Sedaris) montage in the final season, the screen was originally meant to be broken up into 16 separate squares – not unlike a Zoom call – to depict her slow descent into mundanity. But during a pre-thumbnailing meeting, Winfrey conceived the idea of multiple neon-colored Princess Carolyns on screen at once to depict the unforgiving schedule of a workaholic, single mother, Hollingsworth said.

“Once you create this whole world, it’s like (being) in the driver’s seat of your own dreams,” Hollingsworth said. “You can move about in it and, in the case of our show, do as many drugs as you want.”

Departing again from the show’s typical animation style, Winfrey scoured public domain archives for historical photographs she could use to tell the origin story of Princess Carolyn’s distinctive necklace. The black-and-white photos, depicting tenement scenes of hanging linen and urban alleyways, were overlaid with prints of pet cats to achieve a nostalgic, cut-out animation effect, she said.

For every episode, Hollingsworth said the metaphorical thumbprint of each creator is evident in its world-building, much like the literal thumbprints left by British animator Nick Park on his early “Wallace and Gromit” claymations.

In the show’s 2D animation, the personal touch manifests as inside jokes and visual gags: Princess Carolyn drinks Cat-bernet wine, reads “A Tale of Two Kitties” and visits Whales, while movie posters advertise “Invisi-Bull” and warn to “Steer clear!” The animal-based humor only increased as the writers began to know their world more intimately, at times leading to not producible 50-page scripts, Hollingsworth said.

“You’re not gonna see any show on TV that hasn’t been touched by 60 hands,” Hollingsworth said. “Do a trust exercise and fall back into those 60 pairs of hands and see what they come up with.”

But three pairs of hands – James Bowman, Alex Salyer and Mollie Helms – were largely responsible for animating BoJack’s friend Diane’s (Alison Brie) breakdown in season six, which leads up to the Emmy-nominated episode Winfrey directs. While Bowman spearheaded the process, Salyer said they each projected their own translation of anxiety into the animation. When Diane clenches her fist in frustration, it turns into a mass of writhing scribbles – Salyer said the moment is inextricable from Helms’ own method of emoting.

“(Anxiety) is messy and there’s a million thoughts going through your head, like the scribbles and wiggly lines of constant motion,” Salyer said. “I think we all put a bit of ourselves in it because you have to dig those feelings out of yourself in the process, like how an actor has to become a character.”

With scribbled-out fists and faces, paired with moments like Winfrey’s piano-turned-stripper pole, viewers can easily pose their own interpretations of the animation choices – which the creators fully enable, Hollingsworth said. When executing season five’s overly inflated Philbert balloon, a consistent motif in BoJack’s drugged-out dreams, the supervising director asked creator Raphael Bob-Waksberg what the point was. He said there was none.

“The whole point was for it to be a mirror for viewers to put their own thoughts into it, to hold their own meaning rather than explicitly telling them the ‘why,’” Hollingsworth said.