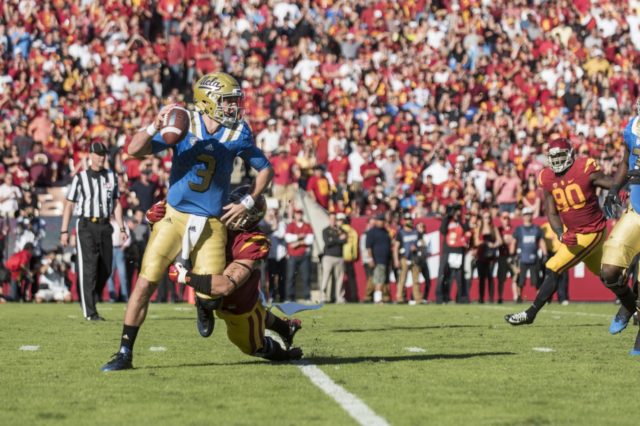 Former UCLA quarterback Josh Rosen was cut and signed for his third team as he highlights this week's rundown. (Daily Bruin file photo)

No. 28 seed Jennifer Brady is having the best US Open women’s singles run of any former collegiate player in the 21st century.

Part of the UCLA women’s tennis 2014 national championship team, the three-time All-American has yet to drop a singles set on her way to the quarterfinals of the major tournament. She defeated No. 17 seed Angelique Kerber 6-1, 6-4 to make her the first former college player to make the last eight since 1994.

Brady will take on Yulia Putintseva on Tuesday with a chance to book a spot in her first semifinals in a Grand Slam.

“For me, college was a big learning experience on and off the court… Also having Stella and Rance, they made me fall in love with the game a little bit more. Really happy with my decision to go to UCLA.”

Third baseman Pat Valaika — who started all 66 games for the Bruins in their 2013 national championship-winning season — had a solid start to September for the 19-21 Orioles.

Valaika batted .421 over six games, helping his squad to a 4-2 record over the two New York teams. The stretch was highlighted by a 4-for-4 game in the series opener versus the Mets, where he notched a double and two runs in a 9-5 win.

The Orioles still have an outside shot of the playoffs, as they sit two games behind the Yankees for the eighth seed in the American League. Baltimore took three of four games against its AL East rivals and could catch them to make the postseason for the first time since 2016.

Former UCLA quarterback Josh Rosen has had a rough go in the NFL.

Since being selected with the No. 10 pick in the 2018 NFL Draft, Rosen struggled to claim a starting spot in the league. He has compiled a 3-13 record over two seasons in Arizona and Miami.

He was released by the Dolphins in final cuts Friday but soon signed with the Tampa Bay Buccaneers’ practice squad. This marks his third team in three seasons.

After being unable to prove himself so far, Rosen may be on his last leg and will need to work his way back if he wants to earn another shot at starting.