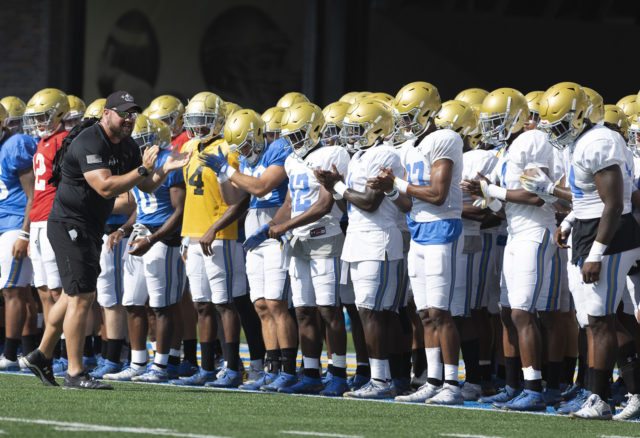 The Bruins’ last practice as a team was March 11.

Over six months later, they may have a path to a return.

A UCLA Athletics spokesperson said they could not confirm or deny whether the meeting of athletic directors occurred, but reiterated that the team was still in Phase Three of its Return to Training plan. That phase includes some coach-led instruction, with all team activities taking place outdoors and in groups of less than 12.

The Mercury News, however, reported UCLA and USC are both preparing to resume full-contact practices when the Pac-12 gives the green light to move on to that stage, and LA County officials would not oppose.

With another hurdle potentially out of the way for the Pac-12’s LA squads, the announcement of a fall season may not be far behind.

A Pac-12 CEOs meeting will take place Friday, and multiple outlets have reported the conference could announce start dates for the football, men’s basketball and women’s basketball seasons. Football season could reportedly start as soon as late October.

To meet coach Chip Kelly’s requirement for six weeks of practice before an Oct. 31 kickoff, UCLA’s full roster would need to get back to Wasserman Football Center by Saturday.

A vote on the seasons’ timelines is not required to take place at the meeting Friday, but a consensus could still be reached.