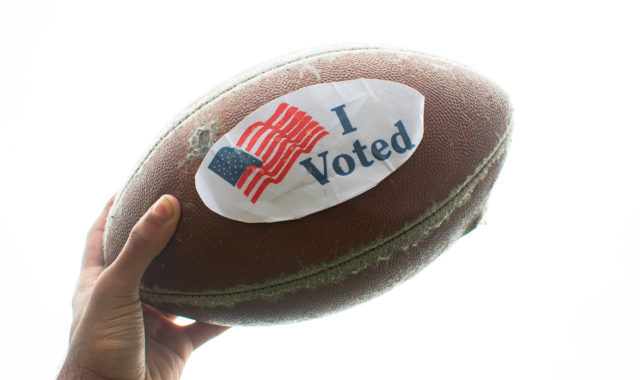 UCLA Athletics pushed this sentiment within the department for the past three months and will continue to spread it up until, and through, Election Day.

In June, UCLA Athletics launched the Voting Matters Initiative which aims to get all eligible student-athletes registered and educated to vote in time for the upcoming election. The initiative was one of new Athletic Director Martin Jarmond’s biggest projects when he took over the reins this summer.

“As an athletic department, now is the time for us to take action, to demonstrate national leadership and to signal to our student-athletes that voting matters,” Jarmond said in a statement in June. “The Voting Matters Initiative will partner with student leaders and existing organizations on campus to provide education and support action.”

The first step was to assemble a coalition tasked with finding the requisite resources to increase voter registration and education among UCLA student-athletes.

One of the players who decided to be part of the coalition is rising sophomore gymnast Paige Hogan. Her coach, Chris Waller, reached out to her asking if she and a teammate would like to be the team’s representatives in the coalition.

It was an easy decision for Hogan given the nature of the COVID-19 pandemic and the Black Lives Matter protests over the deaths of George Floyd, Breonna Taylor and more Black people.

“A lot of our athletes were just over the fact that there are so many injustices going on within our voting system, within our world leaders and all that,” Hogan said. “It really inspired us to get this Voting Matters Initiative started and to bring people together to educate them more.”

While the VMI is Athletics-oriented and was created for student-athletes, Jarmond pointed out that meeting with and learning from other student organizations is paramount for the success of the coalition.

The VMI reached out to BruinsVote, a campus-wide coalition whose mission is to encourage and aid civic engagement at UCLA through voter registration, voter education and voter turnout, according to its website.

Karen Hedges, the UCLA Student Affairs’ deputy director for campus life, oversees all campus-wide civic engagement programs on behalf of the vice chancellor, including BruinsVote. She said since Jarmond took over she has been involved with the VMI, partnering with the program and presenting programs at its trainings.

Hedges said the VMI is a great way to share BruinsVote’s message of the importance of voting – especially to student-athletes in Westwood and around the country – given their vast social platforms.

Hedges also mentioned the significance of student-athletes’ participation in voting because of their age and the power of young people more generally.

Young people make up the bulk of the voting-eligible population and thus should have the loudest voice when it comes to voting and policy-making. But, as Hedges pointed out, election after election, voter turnout among young people pales in comparison to older age groups.

For Chase Griffin, a rising sophomore quarterback for UCLA football, the VMI is about more than just getting student-athletes registered to vote. It shows the athletic department has trust in its student-athletes and their ability to promote UCLA values, Griffin said.

The generations before Griffin have given him the opportunity to take part in a democracy, and he said voting is a way for him to pay tribute to those that came before him and to find a sense of acceptance within his society.

“There’s been a lot of people – ancestors – in my family tree who have fought a long time for me to even have the right to vote comfortably and for that vote to be counted,” Griffin said. “There are millions of people who have been historically disenfranchised, and I think exercising the right to vote is both a way of honoring the people who came before you and also giving yourself both a literal and symbolic sense of belonging to your country.”

Both Griffin and Hogan spoke about the understanding from within the athletic department about student-athlete requests and suggestions regarding the VMI. From the athletic director to the associate athletic directors to the position-specific coaches on teams, the two said there has been an overwhelming amount of support.

The overall encouragement from the athletic department and the enthusiasm with which Jarmond has supported this project has comforted Hogan about the VMI. Hogan said his leadership is inspiring to Bruin athletes, both present and future alike.

“It’s awesome to see that your administration and your coaches and everyone in the community (are) passionate about this,” Hogan said. “Having a new athletic director come in and really push for this initiative to happen and get the ball rolling is a great example for our student-athletes now and our future student-athletes. I know as a community in the athletic department, this was a really big thing for us and a lot of people are coming on board.”