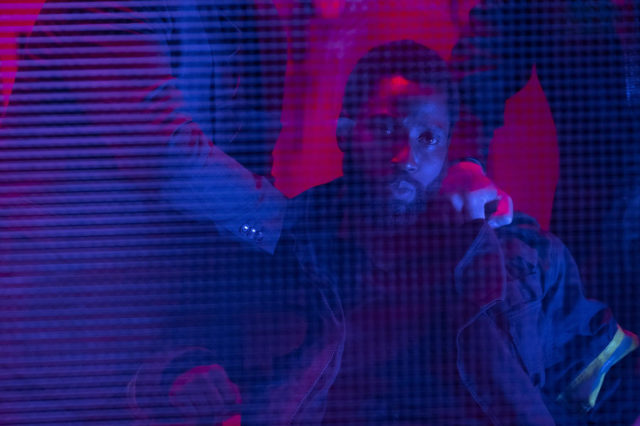 Now, he is a bona fide Hollywood action star.

In a summer movie season ravaged by the COVID-19 pandemic, “Tenet” was finally released in the United States on Sept. 3, and Washington plays the leading role, the nameless secret agent known only as the Protagonist.

Washington spoke about “Tenet” with Daily Bruin senior staffer Sam Connon as part of a virtual college roundtable discussion organized by Warner Bros. and Junket Productions Inc. The leading man broke down what it was like working with director Christopher Nolan, co-star Kenneth Branagh and the rest of the all-star cast and crew behind “Tenet,” as well as what it was like traveling the world to shoot this summer’s biggest flick.

Daily Bruin: “Tenet” features very bombastic action scenes, likely bigger than anything you’ve done before in your career – did you do your own stunts for them?

John David Washington: I did most. I’m not even going to put a percentage on it out of respect, but I did a lot, and I put my body through that. I respect all the action stars of the world: Tom Cruise, Jean-Claude Van Damme and company. I don’t know how they could do two movies a year – doing that kind of stuff is crazy.

I loved every minute of it, but I needed the proper amount of rest afterward. I’m ready for a rom-com now because I can’t put my body through that again this year, that’s for sure.

DB: Did your football career help set you up for this role?

JDW: Exactly, I was back on my two-a-day, three-a-day workouts, dieting. That was good for the ego, I felt like I was ripped. (But) it was all the getting thrown around and fighting backward that started to take its toll on me. (There was) a lot of running with heavy equipment and guns and masks.

DB: You got to work with Christopher Nolan for this film, and with Spike Lee in “BlacKkKlansman,” so you have a lot of experience with top-tier directors. But one of your co-stars in “Tenet,” Kenneth Branagh, is also a director. Did he give you any pointers or embody a director mentality on set?

JDW: I was hounding him about what it was like shooting “Much Ado About Nothing.” I love that movie, (which) he directed and starred in, so I was asking him all kinds of questions about it. He gave me great pointers about script and understanding character and even stage work. Being able to run lines with him, I was like, “I’m just casually running lines with Kenneth Branagh. This is crazy, (he) is a legend.”

DB: The large-scale globe-trotting in “Tenet” might be just another day at work for the Protagonist, but what was it like going to all these different countries, shooting on location and traveling the world for this?

JDW: That was definitely a perk. The personality of the film would take on the location we were in, which makes it a grander experience. It makes you feel like the weight of the world is on the Protagonist. You’re seeing what he’s actually saving by being in all these locations in the film.

Just personally, I never thought I’d ever be able to visit Denmark and be in a wind farm in the middle of the ocean. I never knew that existed – that it wasn’t a green screen. Seeing a plane crash into a hangar, a (Boeing) 747, sitting opposite Sir Michael Caine, I didn’t think that would ever happen in my life. All these “wow” moments that happened while filming, I’ll never forget them.

DB: Earlier this year, Guy Pearce was talking about “Memento” and how he was confused by the script leading up to filming it. Going into another nonlinear Nolan movie, was there a new approach you took to prepare for a character’s journey when the character maybe doesn’t even know where he is in time?

JDW: I actually didn’t read that, but I’d echo that. I was always constantly trying to catch up to Christopher Nolan. What was interesting – and what usually doesn’t happen with me – was the physicality of the character informed me more about the character than it usually does.

We had two months before we started principal photography for training and learning how to walk, talk, speak, punch, fade and shoot backward. And that gave me a lot of information about how the story’s going to work, how it was going to be told and my relationship to the story and inversion.

DB: Your co-stars have had a lot of experience on special effects-heavy movies – whether it’s “Twilight” or “Guardians of the Galaxy Vol. 2” – but this is the most expensive film that you’ve ever been in. Did you get any advice from your co-stars for how to go at these big spectacle scenes?

JDW: They kept saying how (having) experienced big budgets like DC or Marvel, this was still a unique experience for them too, and they were learning this together. “There’s nothing like ‘the Christopher Nolan experience'” is what they all kept saying.

Seeing the scale of these set pieces, it was incredible what they were able to build and construct, like Stocks 12 Russia, the wind farm and this huge icebreaker in the middle of the ocean. It was incredible, I’ve never seen anything like it.

But at the same time, (Nolan) made you feel so significant. We shut down an entire freeway in Estonia for two months, (which is) equivalent to the 405 (Freeway). Can you imagine that? Shutting down both sides of the freeway for six days out of the week for two months? And when we reset to shoot the scene again, I saw all the cars in the background go back to their spots, (thinking) I can’t believe we’re shooting a movie right now like this. I’m on top of a fire truck in Estonia living my best life, we took over the entire freeway.