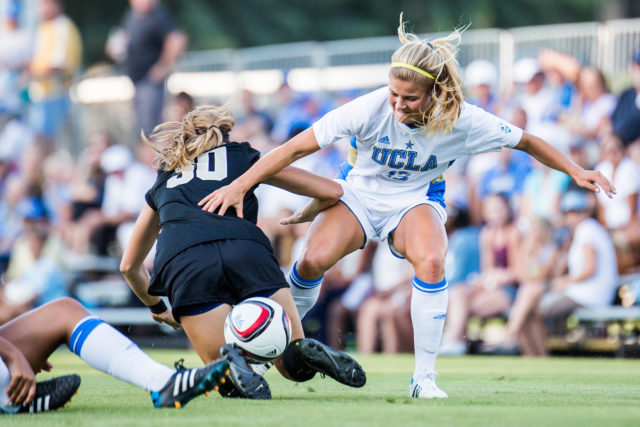 The points were shared in OL Reign’s opening match of the NWSL’s Fall Series against Utah Royals FC, thanks in part to former UCLA women’s soccer forward Rosie White. Within six minutes of her team pulling to only a goal behind, the New Zealander calmly slotted a first-time effort into the lower left corner of the Royals’ goal, leveling the score at two goals apiece.

The final hour of the game did not provide any more goals, and the final score was 2-2, giving the Reign their first point of the young season. White and OL Reign will be back in action Wednesday against the fourth-place Portland Thorns.

For the first time since 2013, the Cincinnati Reds are going to be playing October baseball. Leading their late-season surge – the Reds won 12 of their last 16 games – was former UCLA baseball right-hander Trevor Bauer. In his final start of the regular season Wednesday against the Milwaukee Brewers, Bauer threw eight innings of one-run ball on three days rest. His 12 strikeouts helped him become one of three pitchers in the majors to reach the 100-strikeout mark in the shortened season.

Getting out of a 1st and 3rd situation/0 outs. pic.twitter.com/pczwJZpDpi

At the conclusion of the 60-game regular season, Bauer leads the National League in ERA, WHIP and opponent batting average and is only four strikeouts behind the New York Mets’ Jacob deGrom’s 104. The potential National League Cy Young award winner will toe the rubber Wednesday in Game 1 of the wild card round of the playoffs against the Atlanta Braves.

Making his final start in another playoff-less season for the Los Angeles Angels, right-hander Griffin Canning – a Bruin from 2015-2017 – racked up a career-high 10 strikeouts in six innings against the San Diego Padres. Canning only allowed one run in the outing, lowering his season ERA to just under 4.00 and earning the second win of his sophomore campaign.

Right-hander Gerrit Cole will be pitching in the postseason for the third straight year – although this year it will be in pinstripes. The New York Yankees’ ace tossed seven innings in his final regular season tune-up against the Toronto Blue Jays on Tuesday, allowing one run on five hits while striking out seven.

Cole concluded the regular season with a 7-3 record, a 2.84 ERA and 94 strikeouts in 73 innings pitched. He ranks sixth in the American League in ERA and third in K% with a 32.6. The former Bruin is scheduled to take the ball Tuesday in the Yankees’ wild card series against the Cleveland Indians.

For the third consecutive week, Jacksonville Jaguars’ linebacker Myles Jack recorded 11 total tackles. A Bruin from 2013-2015, Jack made 178 tackles in his college days and is now tied for the league lead in tackles through almost three full weeks of play. Jack and the Jaguars travel to Ohio as they try to get back to the .500 mark against the Cincinnati Bengals next week.

Another former UCLA football linebacker recorded double digit tackles this week as Eric Kendricks of the Minnesota Vikings picked up 10 in a 31-30 loss to the Tennessee Titans. After 11- and 12-tackle performances in Weeks 1 and 2, respectively, Kendricks is tied at the top of the leaderboard with his former teammate Jack. The Vikings will look to get back into the win column in Week 4 when they take on the Houston Texans.

On the winning side of the Vikings’ and Titans’ Week 3 matchup was yet another former UCLA linebacker. Jayon Brown recorded seven tackles – tied for the most on the team – as the Titans won their third straight game to open the 2020 season. In his first four years in the league, Brown has 273 tackles in 49 games played. Tennessee will look for its fourth win of the season in a meeting of undefeated teams next week against the Pittsburgh Steelers.

It took the San Jose Earthquakes nine games, but they finally have their first regular season win since the MLS restarted in August. After the Earthquakes equalized against LAFC in the 80th minute, midfielder Jackson Yueill gave the visiting Earthquakes the win with a goal in the third minute of stoppage time.

The former Bruin’s game-winning goal was his first score of the campaign in his 13th start. The Bloomington, Minnesota product now has four career MLS goals in 79 appearances and has worn the captain’s armband five times for San Jose this season. The Earthquakes will look to continue their winning ways against the Los Angeles Galaxy in the California Clasico on Saturday.