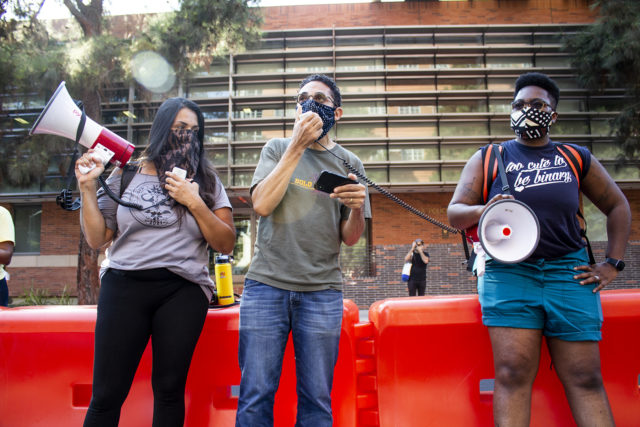 Protesters held signs in front of the Hammer Museum calling for the defunding of UCPD in an effort to bring awareness to the movement to abolish the police. The UCLA Cops Off Campus Rally was organized by several groups, including the No UCPD Coalition and the Divest/Invest UCLA Faculty Collective.

SA Smythe (right), an assistant professor of African American studies, addressed the crowd as protesters prepared to march to the police department on campus. Smythe said that the Divest/Invest UCLA Faculty Collective was initiated in response to university police using Jackie Robinson Stadium as a detainment center for protesters on June 1.

Several cars honked while driving past the intersection. Heidi Hathorne, a second-year environmental studies student, showed off her sign to those supporting the effort from the road. “I have an opportunity to support a certain group of people,” said Hathorne. “I haven’t been outside in weeks. Now is my chance.”

Volunteers demonstrated hand signs that protesters could use during the march to signal if they needed water or silence.

A protester stood from the driver’s side of a car with a sign, helping block the side of the road where the demonstrators were standing from oncoming traffic.

Gabriela Vazquez (right), a project coordinator with La Defensa, spoke in support of abolishing police presence on all UC campuses. “We work hard to create alternatives to incarceration with the county,” said Vazquez. “We are working to decarcerate the largest jail population as well, which is the LA County jail system.”

One demonstrator went beyond paper and cardboard signs, printing “FTP” on the bottom of their skateboard.

After leaving the Hammer Museum, the crowd marched 0.6 miles along Westwood Boulevard before arriving at the police department.

Protesters chanted several slogans to the beat of a drum, including “UCPD has got to go!”

The demonstrators arrived at UCPD around 3:45 p.m. and were greeted by traffic barricades but no noticeable police presence.

Robin Kelley (center), a distinguished professor of history, speaks to onlookers outside the police department. “This is not a dislike of individuals,” said Kelley. “It’s not about removing a safety service from campus; it’s about finding an alternative. We should use these resources for something else.”

The protesters climbed over the traffic barricades to rally closer to the police building.

Protest flyers circulating on social media had encouraged attendees to bring pots and pans to the event for a cacerolazo, a form of protest that involves making noise to attract attention.

“All forms of violence are health concerns,” said Joey Li (right), a graduate student at the David Geffen School of Medicine. “Police brutality is the most direct health concern. They’re killing people.”

At the end of the planned portion of the rally, protesters continued to call for the defunding of UCPD.

Following the demonstration, UCLA traffic control officers emptied water from the barricades to remove them from the street.

Mehra is currently the Photo Editor for the Daily Bruin. Previously, she was an Assistant Photo editor on the Arts & Entertainment beat in addition to writing for The Quad. She is also pursuing a B.A. in psychology with minors in anthropology and global studies.