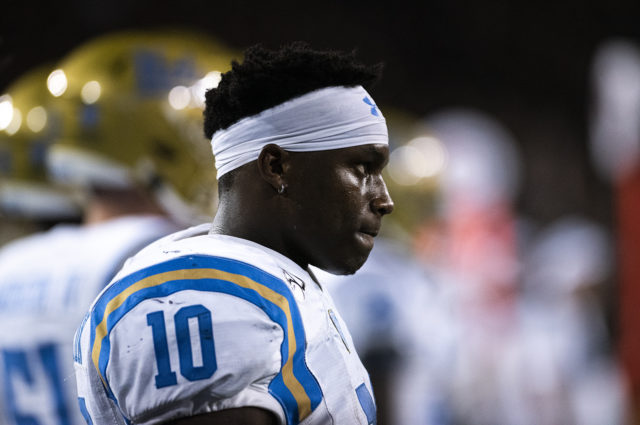 Redshirt senior running back Demetric Felton switched from the wide receiver position during the 2019 season. Now, he is expected to lead the backfield group for the shortened 2020 campaign. (Axel Lopez/Daily Bruin senior staff)

UCLA football finally has a schedule for its 2020 season, so Sports editor Jack Perez and senior staff writer Sam Connon will be taking a look at the Bruins’ outlook at each position. From award favorites to comeback stories, Daily Bruin Sports will analyze each position’s depth chart and make predictions for how their seasons could unfold. Next up – running backs.

The Bruins lost their No. 1 running back from the last two years, as Joshua Kelley graduated and went to the NFL.

But a surprising name is poised to take over in the backfield.

Redshirt senior Demetric Felton, who switched from wide receiver to running back during the 2019 season, will handle new responsibilities in an unprecedented year. Besides junior quarterback Dorian Thompson-Robinson, Felton was the only player outside of Kelley to have at least 25 carries – former backup quarterback Austin Burton was fourth.

The duo will hope to have a heavier workload behind Felton, who operates as more of a receiving back. If they come out of the gates slowly, look to graduate transfer running back Brittain Brown. After 130 carries in his freshman year, Brown totaled just 92 in the following two seasons due to injury, meaning he should be fresh for the Bruins.

Felton should stand out as the top option, but Kelly will probably employ a platoon to make up for all the touches Kelley took to the pros.

Kelly has never been shy about running the ball. Having mobile quarterbacks and a number of future NFL running backs at both Oregon and UCLA has allowed him to lean on the run game during his coaching career.

The Bruins ran the ball 53.5% of the time in 2019. However, without Kelley as a workhorse, UCLA will have to get more creative in their schemes.

Expect a lot more runs outside the tackles, as speedsters like Felton and Allen will try to work on avoiding tackles rather than trying to break through the middle. Irby and Brown could represent a nice change of pace in short-yardage situations.

With a mobile quarterback under center, Kelly could try to design more runs for Thompson-Robinson. Or Kelly could use his signal-caller as a decoy, allowing the running backs to see more frozen defensive ends and get out quicker.

Kelly does not like doing run-option plays though, so do not expect to see those too often. The running game will be used to open up passing lanes later on in the game.

Kelly will not abandon the run, and fans should expect to see it, especially if Thompson-Robinson struggles with injuries or turnovers again.

Like Sam said in his quarterback preview, it is very different projecting for a seven-game season versus a 12-game campaign. Last year, Kelley racked up over 1,000 yards on the ground in 11 games.

If any Bruin comes close to that mark in the shortened year, it would be a miracle, especially if Kelly tries to dole out the touches evenly. And in a time when quarterbacks will be more heavily relied on, the running backs may be the ones who see their stats suffer as a result.

Irby and Allen should play bigger roles if healthy and able to play. The two have been here for two full seasons now and should know Kelly’s playbook like the back of their hands. Felton also showed huge flashes of potential, and his receiving ability out of the backfield will help Thompson-Robinson on late downs.

If the three of them plus Brown – depending on how well he has integrated – approach the 150-yards-per-game mark that the Bruins were able to achieve a year ago and stay healthy all season, then UCLA should be in good shape. If injuries, sickness or inconsistency plague them, then Kelly will be missing Kelley even more.