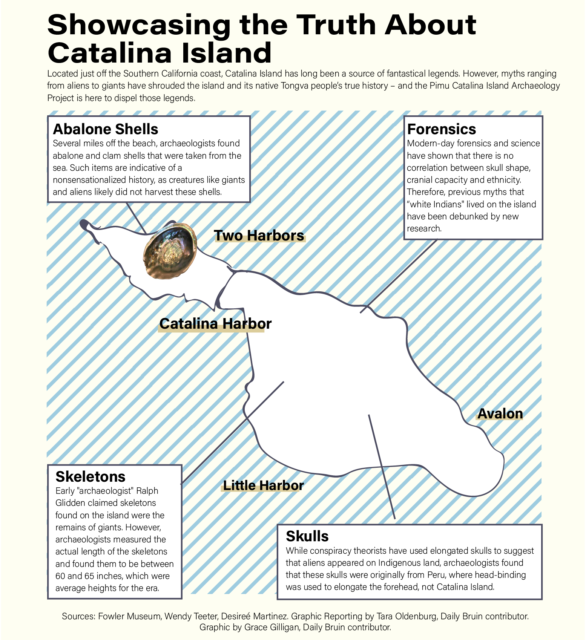 Editor’s Note: In the original version of this article’s graphic, there were multiple photographs of skeletal human remains used to illustrate excavation at burial sites on Catalina Island. We recognize that the use of these photographs was an especially unacceptable misstep considering the importance of burial to the Tongva people, the native inhabitants of both Catalina Island and UCLA land, who are discussed in the story. We are deeply sorry to the Tongva people for this oversight and will take steps to prevent similar future errors.

Archaeologists are showcasing the truth about Santa Catalina Island and laying aliens, giants and underground tunnels to rest in the meantime.

One of the Channel Islands off the coast of California, the island is the indigenous home of the Tongva people, who have developed rich histories connected to the land and archaeological artifacts. But since contact with the West, their history has been overshadowed by fantastical accounts of Nephilim, aliens and “white Indians” that looters perpetuated in order to please their benefactors, increase their fame and profit by selling culturally significant artifacts.

Wendy Teeter, curator of archaeology at the Fowler Museum, Karimah Kennedy Richardson, and other archaeologists are speaking at today’s Fowler Museum panel titled “Curator’s Choice: Mystical Romanticism” to dispel the myths that have shrouded the truth of the Tongva people’s legitimate histories on Indigenous Peoples’ Day.

“In and of themselves, (the stories) don’t seem like any harm,” Teeter said. “But when it comes to displace the actual history and remove the Tongva people from that history … (it) perpetuates a white dominance over the island. … That’s the double-edged-sword that we want to discuss. ”

Since 2007, Teeter said she and other archaeologists have been working to repatriate stolen archaeological artifacts and dispel the myths that have served to separate Indigenous peoples from their ancestral histories. After these myths, which include stories of aliens with elongated foreheads and eight-foot-tall giants, had been heard by a native elder who lives on the island, Teeter said the elder urged her to continue the project in order to preserve the legitimate history of the Tongva people.

At the panel, Teeter said she will present some of the findings she and other archaeologists specializing in Catalina Island have found to dispel myths. Teeter said these findings include forensic evidence that geographically places elongated skulls to early civilizations in Peru and measures Tongva ancestors’ heights at 60 to 65 inches, not the eight-foot-tall giants Western looters had posited.

Teeter is speaking at the panel alongside Desireé Martinez, president of Cogstone Resource Management and Tongva native who has worked to unearth evidence that was used to dispel myths for the past 13 years. Martinez said the team taught members of UCLA’s field research institutes and Native American cultural practitioners the basics of archaeology by excavating and charting the island together. The various learning opportunities for native people on Catalina have chipped away at the shrouded history of the island and allowed some of the Tongva people to reconnect with their ancestors’ lands, Martinez said.

“We have documented stories of people who lived on Catalina being removed (by colonizers and) living in a village in downtown Los Angeles,” Martinez said. “There was a really large disconnect in the community from the island, so we have been striving for decades to have that connection once again.”

Martinez said Catalina Island is particularly important to native people – even those who did not live on the island – in carrying out oral traditions related to medicine and other beliefs in the surrounding Southern California areas. But as a result of the myths that have been perpetuated by non-native looters, Martinez said various Indigenous communities have been forced to limit their traditional practices.

“Not being able to have contact with the island affected the (Southern California Indigenous) community because that’s a part of the belief system,” Martinez said. “That’s a part of who we are, and having generations and generations not being able to have that contact has a tremendous effect on how our community can practice our traditions today.”

While Teeter and Martinez have concentrated on connecting Indigenous peoples primarily back to Catalina Island, the importance of preserving and sharing the histories of native peoples is not novel for many Indigenous communities. American Indian Student Association leaders Kokonow Kinney, a third-year biology and American Indian studies student and Desirae Barragan, a second-year human biology and society and American Indian studies student, said they experienced firsthand the loss of culture that comes as a result of separating natives from their land and shrouding their histories.

Barragan, an enrolled member of the Gabrielino Tribe, said the greatest myth that affects almost all native communities is of the “vanishing Indian,” which perpetuates the false idea that Indigenous peoples are no longer alive and present on the land of the modern United States. Kinney, a member of the Yurok Tribe, grew up on his tribe’s reservation, but he said restrictions the federal government had previously placed on religion, language and cultural practices have diminished his ability to fully hear the stories of his tribe. Whether a native to Catalina Island or not, unfortunately, myth has plagued almost all Indigenous peoples. But, Teeter said, dispelling these myths is the first step to reconnecting lost histories with the Indigenous American population.

“These histories are what tie us here to our land, and that’s why the federal government has tried to erase our histories,” said Kinney. “It’s erasing our peoples. Colonization is not an event that just happened hundreds of years ago. It’s an ongoing fight … and we as Indigenous people are continuously fighting against our own erasure.”