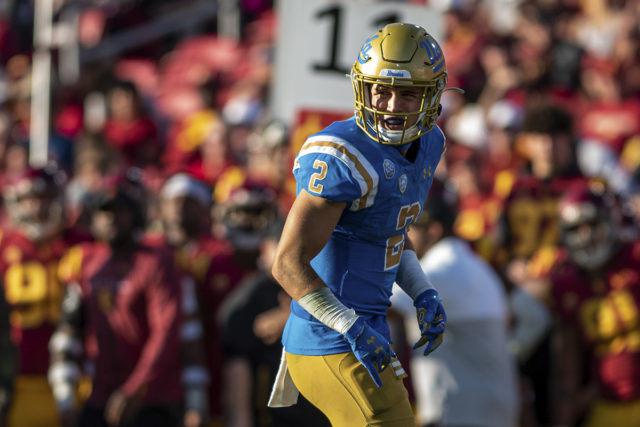 UCLA football finally has a schedule for its 2020 season, so Sports editor Jack Perez and senior staff writer Sam Connon will be taking a look at the Bruins’ outlook at each position. From award favorites to comeback stories, Daily Bruin Sports will analyze each position’s depth chart and make predictions for how their seasons could unfold. Next up – wide receivers.

The Bruins aren’t losing a single receiver who caught a pass off of last year’s roster.

Redshirt sophomore Kyle Philips, junior Chase Cota and senior Jaylen Erwin are all back, as is fan-favorite former walk-on, redshirt senior Ethan Fernea. Philips will work primarily out of the slot to start the year, while Cota is expected to get most of his snaps in the Z-receiver role.

Erwin, who caught the fourth most passes on the team in 2019 with 32, will be the No. 1 X-receiver to start the year. Junior Michael Ezeike, redshirt freshman Charles Njoku and three-star freshman Matt Sykes will all be competing for playing time there as well, while Fernea and four-star freshman Logan Loya will be playing mostly out of the slot and as reserve Z-receivers.

Considering how few receivers coach Chip Kelly trots out on the field on a nightly basis, only Philips is expected to be a near-every-down player with guaranteed targets.

Philips and junior quarterback Dorian Thompson-Robinson built a solid foundation of trust through the conference schedule last year, as the wideout finished the season with 60 receptions and 681 yards after beginning the season buried on the depth chart.

If anyone is going to replicate that rise in 2020, it will most likely be Loya, who can line up in the slot and outside the numbers while not sacrificing speed or size in either position.

Cota is also on the verge of establishing himself as a true No. 2 receiver, ranking second among UCLA receivers with 350 yards and three touchdowns in 2019.

Kelly and offensive coordinator Justin Frye are going to have to lean more heavily on their wideouts in 2020 if the passing game is to take any sort of leap forward this fall.

Only five receivers touched the ball in 2019, and that includes then-sophomore Delon Hurt, who recorded one catch over the course of the entire season. That isn’t too far off from when seven UCLA receivers got touches back in 2017, considering a then-redshirt freshman receiver Demetric Felton and then-senior Alex Van Dyke combined for three catches and 4 yards.

The difference lies in the usage, rather than the depth.

UCLA’s top three receivers in 2017 all surpassed 590 yards and 55 catches, combining for 23 touchdowns in the process. Philips was the lone Bruin wideout to top those marks in 2019, and only 11 touchdowns were scored by receivers.

Kelly won’t change gears and run a Jim Mora-style pass attack, and Thompson-Robinson certainly isn’t Josh Rosen, but the Bruins will certainly have to utilize receivers more than they have in the past.

Despite the fact Kelly claimed he still wants to run a tight end-heavy offense in 2020, Devin Asiasi, Jordan Wilson and Matt Lynch are all gone, and the Y-receiver depth chart has thinned drastically. That means the X-, Z- and slot receivers like Erwin, Ezeike, Cota and Loya are bound to get more looks this year, and the pass distribution could look very different moving forward.

Without a reliable, every-down back like Joshua Kelley on the roster, Kelly may have to get creative and line up Felton as a receiver more often. Kelly was reluctant to use Felton in the slot last season, but he may be forced to do so in order to avoid being overly predictable when the redshirt senior takes the field.

By shifting dynamic playmakers such as Felton, Philips and Cota all over the field, there could be space downfield for the Bruins to finally utilize their bigger targets.

Ezeike, Njoku, Sykes and redshirt freshman Hudson Habermehl are all at least 6-foot-4, and all four could see jump balls and end zone fades tossed their way if Kelly is truly giving Thompson-Robinson the keys to the offense.

Those plays will likely be few and far between, however, as Kelly’s offense is once again expected to favor game-planned passing lanes and short, efficient passes over air raid-esque home run balls.

The full season statistics will drop for nearly every returning receiver on the roster because of the shortened season, but the per game numbers could be kinder to UCLA’s wideouts in 2020.

Philips will continue producing at the pace he finished with last year, likely breaking the 500-yard mark with 45 catches – good for 850 yards and 75 receptions in a normal season. Cota is more in line with finishing 2020 with 275 yards on 20 receptions, putting him on pace for 475 yards and 35 catches in a full, 12-game slate.

Erwin, Loya, Fernea and potentially Njoku will be the only other wideouts who will contribute statistically in any form, not including when Felton takes the rare snap from the slot.

With the tight end position thinned out due to NFL Draft decisions and the transfer pool, UCLA’s stable of receivers has a lot more pressure to produce in 2020.

Philips has proven he can do so consistently in the past, but Cota and company are going to have to take huge strides in order to diversify the offense and give Thompson-Robinson some help outside the numbers moving forward.