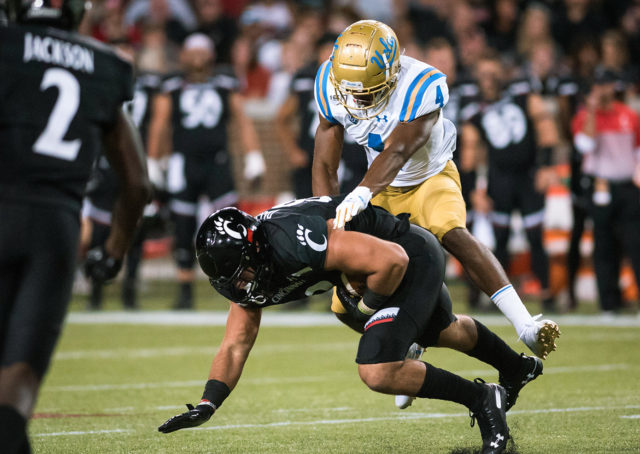 The Bruins have lost most of their familiar faces in the starting defense, leaving new additions in Westwood working to fill the shoes of departed veterans.

With its road opener against Colorado a little more than three weeks away, UCLA football is set to begin a new season without many of its defensive staples who led the team a year ago. Then-redshirt senior linebackers Josh Woods and Keisean Lucier-South as well as senior linebackers Krys Barnes and Lokeni Toailoa all graduated in 2020, while junior cornerback Darnay Holmes was drafted to the NFL in April.

Over Holmes’ three seasons as a Bruin, the lockdown cornerback led the team in interceptions in all three years. With Holmes now playing a significant role for the New York Giants and recording his first sack against the Dallas Cowboys on Sunday, the Bruins will have to look elsewhere in stopping the pass.

“It’s a big role to fill,” said sophomore linebacker Carl Jones. “But coach (Brian) Norwood has all our (defensive backs) ready, everyone’s ready to play, everyone knows what they have to do. Everyone stepped up in a big way by losing (Barnes, Holmes, Toailoa, Woods and Lucier-South). We’ve been stepping up as a whole unit and (it) feels like they never left.”

Despite having a defensive lineup with four fourth- or fifth-year players, the Bruins’ defense still ranked 10th in the Pac-12 in total defense during their last campaign.

Jones, however, said new players this season have also brought renewed energy to the defensive side of the ball, including graduate transfer defensive backs Obi Eboh and Qwuantrezz Knight.

“(Eboh), I can say, he’s really bringing just an understanding of the field to our UCLA (defensive back group) and to just the whole defense,” Jones said. “(Knight,) he’s bringing a lot of energy, a lot of juice every day and it’s nonstop and the whole defense loves it. So these two guys we just brought in are really helpful to our defensive unit.”

But the newcomers in Westwood go beyond Eboh and Knight, and they go further than just players as well.

In January, UCLA added Norwood as the team’s passing coordinator and defensive backs coach. Most recently the co-defensive coordinator at Navy, Norwood’s teams have made a combined 14 bowl appearances since he began coaching in 1990.

Junior defensive back Stephan Blaylock – who led the team in tackles while starting every game at safety in 2019 – said the addition of Norwood has been a big boost to the UCLA defense as they prepare for the season.

“(Norwood is) bringing a new type of energy to the group and a different type of drills too – more aggressive when playing the ball in the air,” Blaylock said. “So I’d say it’s more ball drills with us, just getting us prepared with our press coverage and just things that develop our game.”

Norwood’s contributions to the team have also gone beyond bringing new drills and schemes to UCLA’s secondary. In September, Norwood coordinated a joint community service project to distribute food at the Weingart YMCA along with the UCLA women’s soccer team.

“When (Norwood) first came, he already had plans to help people in need,” Jones said. “We did a backpack drive and just helped people in need. It was a great sight, a great turnout and I was just happy to be there, (and) happy that coach Norwood set that up for us.”