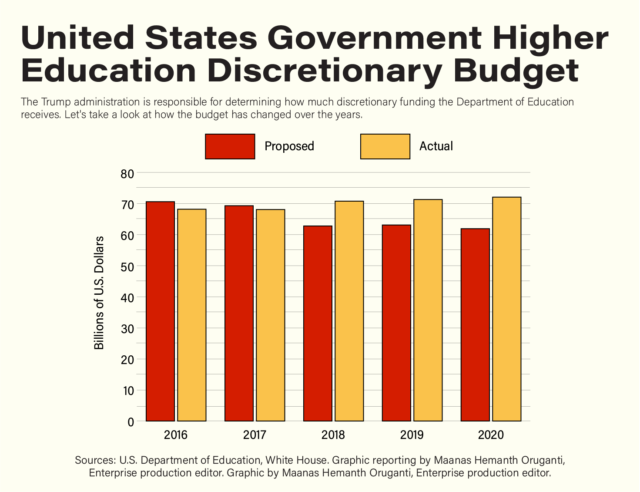 This post was updated Oct. 21 at 10:01 a.m. to reflect clarified language regarding Nadeeka Karunaratne’s area of research.

The U.S. Department of Education’s new Title IX regulations took effect Aug. 14, requiring that universities conduct live cross-examinations of both parties and their witnesses during investigations.

Secretary of Education Betsy DeVos said the new rules will protect the educational rights of all students, including those accused of sexual misconduct. However, some believe they will discourage students from reporting.

A preponderance of evidence standard requires evidence that misconduct more likely than not occurred, said Karunaratne, who researches the experiences of women of color survivors with formal reporting procedures. It is less strict than a clear and convincing evidence standard, which requires evidence that is “highly and substantially more likely to be true than untrue,” according to Cornell Law School’s Legal Information Institute. Previous Department of Education rules mandated universities use the former.

The University of California will continue using a preponderance of evidence standard, Karunaratne added.

Additionally, the new regulations only apply to locations and events in the U.S. that universities have “substantial control over.” Incidents that occur in buildings owned by recognized student organizations, which may include fraternities or sororities, could also be liable to formal proceedings, Karunaratne said.

The new rules still allow universities to provide supportive services to students who experience an incident not covered under Title IX guidelines, Karunaratne added. However, she said she doesn’t think the regulations are grounded in trauma-informed practices.

Trump proposed cuts to the Department of Education’s budget every year he has been in the White House, according to public records.

In his annual budget proposals, Trump has routinely suggested eliminating the Public Service Loan Forgiveness program, which forgives the remaining federal loans of students who work for a government or a nonprofit organization and make 120 monthly payments during their employment.

Trump also called on the Department of Education to eliminate subsidized student loans for undergraduates in need of financial assistance. Additionally, his budget statement for the 2021 fiscal year included limits on federal loans for parents and graduate students, which he said would reduce student debt.

Capping federal loans may push graduate students to take out private loans, which could have higher interest rates, said Clare McCann, the deputy director for federal higher education policy with think tank New America’s education policy program. McCann added that limiting graduate loans may have a disproportionate effect on students of color, who could face discriminatory lending in the private market.

Affordability has been a contentious issue for graduate students enrolled in the UC. Graduate students at UC Santa Cruz went on strike in early February to demand a cost-of-living adjustment as a result of rising housing costs. In March, nearly 100 UCLA graduate students voted to strike but ended up not doing so.

Trump also vetoed a resolution in May that would have nullified DeVos’ updated borrower defense to repayment rules. These rules allow for student borrowers to access financial relief if their universities engaged in misleading or fraudulent activity that led them to take out federal loans. Under DeVos’ new rules, which went into effect July 1, students must individually apply for loan forgiveness only if their universities made a statement or acted “with knowledge of its false, misleading, or deceptive nature.”

Twenty-two states and the District of Columbia have challenged the new regulations in court, according to Inside Higher Ed.

The Department of Justice and race-conscious admissions

In 2018, the Department of Justice rescinded more than 20 documents, including seven that counseled universities to consider race when creating diverse campuses.

Race-conscious admissions policies are part of a larger discussion around affirmative action, a set of processes that allow universities to consider applicants’ race, ethnicity and gender. The policy aims to address the effects of past prejudice and prevent future discrimination, according to Cornell Law School’s Legal Information Institute.

Mitchell Chang, an education and Asian American studies professor, said he expects Students for Fair Admissions v. Harvard, which is currently in the First Circuit Court of Appeals, to reach the Supreme Court. There, it will have important ramifications as the first suit of its kind brought against a private institution, Chang added.

If the Supreme Court rules in favor of Students for Fair Admissions, Chang said he fears there will be a decline in the enrollment of historically marginalized students at universities.

California’s 1996 ban on affirmative action led to a 12% decrease in the enrollment of underrepresented groups, including Hispanic/Latinx, African American and Native American students, in the UC, a 2020 UC Office of the President report found.

“It was very clear from the front end that the Trump administration would … dismantle and end affirmative action,” Chang said.

Huang is the 2021-2022 Opinion editor. She was previously a 2020-2021 assistant Opinion editor and an opinion columnist. She is also a third-year public affairs student at UCLA.