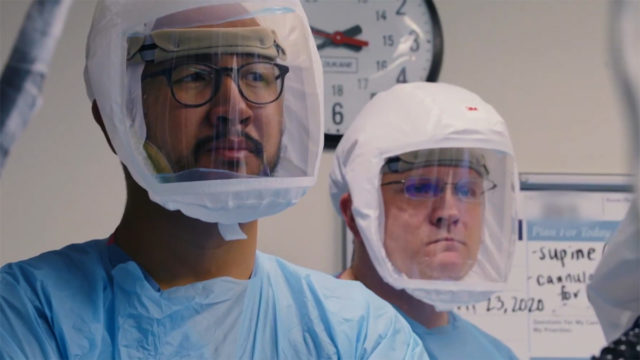 (Courtesy of NEON and Participant)

“Totally Under Control” is the story of canaries in coal mines whose warnings were ignored or suppressed.

Filmed in secret over the past several months, the documentary explores the spread of the COVID-19 pandemic in the United States and paints a grim picture of an inadequate government response. The film has opened in drive-in theaters across the country and will be released on Hulu on Tuesday. Directed by alumnus Alex Gibney, Ophelia Harutyunyan and Suzanne Hillinger, “Totally Under Control” is a vital, compelling piece of journalism that unravels the failures of governance and the devastating consequences of inaction.

The documentary’s title stems from a comment that President Donald Trump made on Jan. 22, glibly telling a reporter, “We have it totally under control.” The statement simultaneously undercut the seriousness of COVID-19 and overstated the administration’s capability and preparedness. The film unfolds largely chronologically, but often uses Trump’s comments as a framework to explore ideas like whether the pandemic is truly “unprecedented.” For example, in response to Trump’s assertion that something like COVID-19 has never happened to the country before, the film expertly walks viewers through the 1918 influenza pandemic all the way to the more recent Ebola and swine flu outbreaks.

However, “Totally Under Control” not only critiques Trump but also exposes the reckless disregard for truth and political dysfunction at every level.

The film shows Rick Bright, a director at the U.S. Department of Health and Human Services, began warning his department about COVID-19 in January. But despite his early action, he was ultimately removed from his position after pushing back against HHS’ medically unsubstantiated support for the antimalarial drug hydroxychloroquine as a COVID-19 treatment. Bright’s story, like many others in the documentary, is shockingly simple, helping the film underline the choices the Trump administration has made in its attempt to downplay the pandemic.

Similarly, Max Kennedy Jr., another source the film highlights and a volunteer for the government’s medical supply task force, walks the filmmakers through the fact that rather than calling in the professionals, the administration had built a team of volunteers in their 20s with no political experience to secure personal protective equipment from around the world. It’s an abhorrent revelation given that PPE shortages proved fatal for some, particularly among medical professionals who were forced to rewear the same gear for days and weeks.

Though the film shows these failings started at the top, “Totally Under Control” makes clear that a lack of leadership trickled down across the board with deadly effect.

The ramifications of inaction are strikingly illustrated through the documentary’s background interview set-ups, which are shown on-screen to further illustrate the pandemic’s far-reaching impact. In order to film nationwide during the pandemic, the filmmakers built and delivered special cameras to subjects who didn’t want to participate in an in-person interview, while using PPE and a shower curtain with a camera hole for those willing to meet in-person.

However, some of the interviews also take place in South Korea, a country that had its first reported COVID-19 case on the same day as the U.S. Because of the swift and comprehensive action taken by the government, South Korea has largely been able to control the virus. The South Korean interviews were filmed with a full camera crew – a stark contrast to the extreme caution needed for American interviews.

The film’s only downside is its pacing. The first hour of the documentary focuses almost entirely on January and February, the period of time right before the pandemic fully hit the U.S. To make up for the time, the coverage of the next six months is quick and selective.

The choice is understandable and mostly serves the story, but it does mean certain elements of the narrative are shortchanged. The moment when the U.S. COVID-19 death toll reaches 100,000 is little more than a blip in the film – and perhaps that choice acts more as an indictment on the state of affairs in the country than the film itself.

Despite the challenge of dissecting almost a year’s worth of news, what makes “Totally Under Control” so effective is the way it pulls back the curtain of fog surrounding the past year. While the public has been inundated with headline after headline about COVID-19, to the point where months worth of news has blurred together, the documentary lays out each news item with frightening simplicity, letting the facts speak for themselves.

The film paints a chilling picture of an administration that let over 200,000 people die, whether through gross incompetence or willful negligence.

Unsurprisingly, the film is emotional and draining, not only because of the heartbreaking headlines and interviews, but also the broader context. It debuts while the U.S. is still in the midst of the pandemic, still grappling with the enormity of all that has been lost and still under the leadership and policy that failed the country in the first place.

Yet “Totally Under Control” is essential for the startling clarity it offers – particularly weeks before an election that could change the course and fate of the country.