Life and Hip-Hop: Exploring the origins of the association between drugs and music 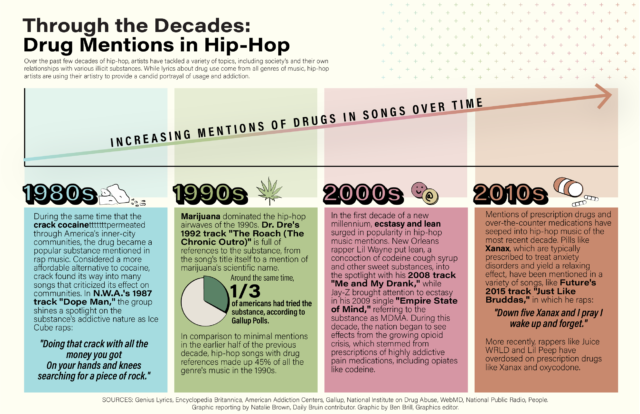 The impact of music extends far beyond the play and pause buttons. Formed in the 1970s as an underground movement, hip-hop has expanded into various art forms and musical sub-genres – with rap specifically being one of the most popular musical styles among today’s youth. In “Life and Hip-Hop,” columnists Natalie Brown and EJ Panaligan explore and analyze how hip-hop intersects with and influences everyday aspects of life.

“Lean with me, pop with me/ Get high with me if you rock with me.”

For many, the lyrics to Juice WRLD’s “Lean Wit Me” embody a rapper’s glamorous lifestyle – sipping lean and popping pills. However, a surface level reading of the lyrics could not be further from the truth. Like many other hip-hop artists, Juice WRLD spoke candidly about his experiences surrounding drug use and brought awareness to the consequences he faced.

Many in the hip-hop community – as well as the U.S. at large – deal with the misuse of drugs and alcohol. According to American Addiction Centers, 19.7 million adult Americans in 2017 were reported to have substance use disorders.

While drugs may be commonly associated with hip-hop, the issue of substance abuse disorder is not exclusive to genre, said freelance hip-hop journalist, Mark Braboy. Rather, it runs deep through the entire music industry. Some of the greatest creators of all time, including Whitney Houston and Kurt Cobain, have had tumultuous relationships with substance use, he said.

Opioids, cannabis and alcohol have always been at the forefront of the most harmful yet popular drugs, said Christopher Evans, a UCLA substance use disorder researcher. People use more or less the same amount of popular drugs, regardless of age, sex, race and socioeconomic status, Evans said. However, because of drug regulations and laws that criminalize certain substances more than others, he said minority groups are disproportionately punished as a result.

UCLA graduate history student Michael Dean said decades of American presidents, from John F. Kennedy to Ronald Reagan, turned away from investing in disadvantaged communities that house many Black and brown populations. They opted for mass incarceration of those involved with drugs instead. Many of these affected communities were the birthplaces of hip-hop, he said.

“Instead of investing in housing, public health programs, drug rehabilitation and drug treatments programs, (America) invested in prisons and policing,” he said.

Because criminalization and substance misuse were things that so heavily affected the communities that created hip-hop, the discussion of these problems trickled down into the music. Hip-hop artists began openly speaking about drug use in the ’80s, Braboy said.

During the crack epidemic, one of the most popular songs was Grandmaster Melle Mel’s “White Lines (Don’t Do It),” which served as an anticocaine public service announcement, Braboy said. While society looked down on those who spoke about these subjects during this time, rap’s growing popularity exposed listeners to the culture, struggles and perspectives of various geographical regions.

Since then, younger artists have become much more transparent regarding their experiences with substance misuse. Juice WRLD spoke openly and authentically about his struggle with a substance use disorder in songs like “Lean Wit Me” and “Empty.” Beyond his lyrics, Braboy said the artist was a cathartic presence who advocated for mental health and healing, using his own troubles to connect with his fans and aid them with theirs. The overdose deaths of Juice WRLD, and others including Mac Miller and Lil Peep, devastated the hip-hop community, shedding light on the problems regarding the prominence of drug use among artists.

But substance use disorder goes far beyond the simple act of taking drugs – it is characterized by an uncontrollable need to obtain the drug by any means necessary, Evans said. Drugs typically provide some sort of relief to those with substance use disorders and trying to quit is a challenging process, with withdrawal symptoms potentially worsening preexisting mental health conditions.

“The drug takes away a depressive stage or an anxiety state and without it, the anxiety takes over and people will do anything they can to stop it,” Evans said.

The lyrical openness of hip-hop artists like Juice WRLD and Mac Miller – and the publicity of their overdoses – has recently sparked debate regarding the glorification of substance misuse, Braboy said. Though rap is more transparent in terms of discussing experiences with mental health and substance use disorder than other genres, he said the misunderstanding and mischaracterization of rap music as putting younger listeners onto drugs comes from people failing to listen to the entire story that hip-hop artists are communicating in their discography.

Fans need to step up and take more accountability, he said. Instead of pestering artists to keep putting out more music when they take mental health breaks, Braboy said fans should send messages of support to artists and treat them like humans instead of machines.

“There’s a lot of people who never came from these (underprivileged) lives before, and partake in voyeurism, in a way,” Braboy said. “Some fans want to imitate these artists rather than learn from their stories.”