Opinion: UCLA must suspend classes on Election Day to give students time to vote 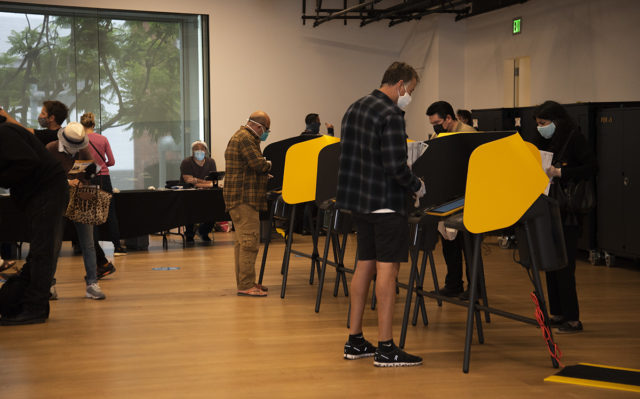 Voting is difficult enough without the added stresses of a pandemic. This year, more than ever, administrators should cancel classes on Election Day to give students the time to exercise their civic duty. (Anika Chakrabarti/Daily Bruin senior staff)

Politicians may not respect the importance of Election Day, but UCLA must.

Earlier this year, the California legislature failed to approve Assemblymember Evan Low’s Assembly Bill 177, which would have established Election Day as a state holiday. Legislative staffers hesitated because they estimated it would have cost tens of millions of dollars. However, they fail to realize our democracy suffers when less than half the electorate shows up to vote.

And the voter turnout at UCLA is far from ideal.

In the 2016 presidential election, one in five eligible Bruins did not register to vote, and one in three who were registered did not vote. These results speak to a worrying trend – 18- to 29-year-olds witnessed the lowest voter turnout of all age groups in 2016.

UCLA can and must help change this.

Some professors have taken the initiative to cancel classes or discussion sections to give their students ample time to exercise their civic duty. But a sweeping mandate from UCLA to suspend class on Election Day is the administrative backing its students need. The university has the opportunity to be a catalyst for change and should do everything in its power to encourage student civic engagement, even if our politicians won’t.

Students haven’t forgotten the four-hour line at the Ackerman Union voting center in March. With only one polling station on campus for approximately 46,000 students, many had to choose between voting and attending class. This delay effectively amounts to voter suppression, even if the intentions weren’t malicious.

“The worst part was having to work [voting] around my schedule since it was a school day,” Chute said. “I had to wait three hours in line and missed an important club meeting.”

Chute added that he was frustrated with the unorganized process and remembered watching students leave to attend class without voting.

Exercising our civic duty should not require a sacrifice. Casting a ballot should not detract from our education, nor take half of our working day.

But at the moment, it does. UCLA must fix this problem by making accommodations for student voters.

BruinsVote, a nonpartisan coalition that promotes civic engagement at UCLA, has emphasized that health officials are recommending the vote-by-mail system. But for those choosing to vote in person, the campus is offering 11 days of voting at the Hammer Museum and five days at Ackerman Union and Bradley International Hall. In an emailed statement, BruinsVote said it hopes that by offering multiple days and locations, students will be able to vote at their convenience.

Making voting more convenient is a step in the right direction. But an entire day dedicated to voting would do much more. Students could have the time to educate themselves on ballot topics, volunteer at polling stations and actively participate in our democracy – without sacrificing class time or other commitments.

Many professors have taken the initiative that UCLA hasn’t – altering class policies during election week to make attendance optional or asynchronous. Robin Kelley, a distinguished professor of history, has set optional attendance policies for his students during election week. He has also provided prerecorded lectures discussing propositions that coincide with course content.

“You can’t possibly teach politics and economics at the university, and not make central the very issues that are on the ballot today,” Kelley said. “I think that is our duty to give students an opportunity to think critically about what they’re going to vote for.”

While Kelley supports the movement to make Election Day an academic holiday, he believes it should ultimately be a national holiday.

“It’s not about today,” Kelley said. “It’s about future elections when we have the mobility and freedom to go out. Will we as faculty and administrators give students the opportunity to vote on that day?”

Of course, many voters are mailing in their ballots. But that’s not to say undecided voters and those who prefer in-person voting won’t be waiting in long lines.

2020 has been an ugly year for politics. Americans continue to reckon with the devastating effects of systemic racism, witness a COVID-19 death toll continually rise as politicians belittle and disregard it, all while watching the partisan divide splinter the country. Tensions run high during election season, but this one is unprecedented. With the rights of immigrants, the LGBTQ+ community and women on the line, an election has never been more crucial.

Creating lenient attendance policies, offering asynchronous options or, better yet, declaring Election Day an academic holiday is not a want but a necessity.

At a university that champions civic involvement, it only makes sense.