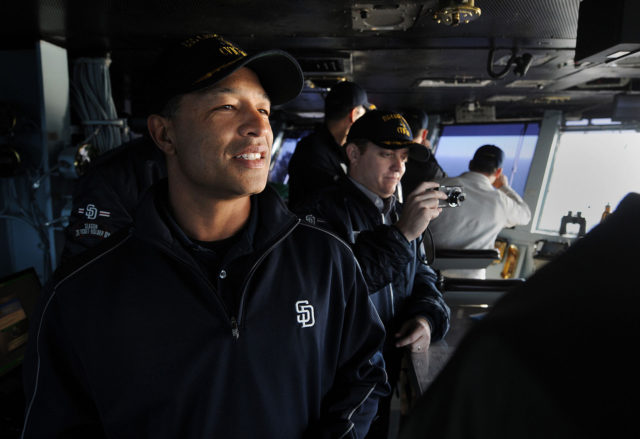 Dave Roberts started as a player for the Bruins in 1991, before making his way to the MLB where he played 10 years. Afterwards, Roberts was the first base coach for the San Diego Padres before becoming the manager of the Dodgers and winning the World Series. (Courtesy of Wikipedia Creative Commons)

The Dodgers are World Series Champions for the first time in 32 years.

This was our year, Doc. #WorldSeries pic.twitter.com/eCRs5eaJMc

Los Angeles finished the regular season with the best record in baseball at 43-17, before sweeping their first two playoff opponents and overcoming a 3-1 deficit in the National League Championship Series to reach the World Series. Roberts’ Dodgers defeated the Tampa Bay Rays in six games to take home the Commissioner’s Trophy.

Elected a member of the 2020 UCLA Athletic Hall of Fame class earlier this year, the Bruin outfielder from 1991 to 1994 still holds the UCLA record for most stolen bases in a single season and career. He began his career as a walk-on and finished as the team captain.

Roberts is just the second Black manager to win the World Series.

Linebacker Eric Kendricks continues to rack up tackles in the 2020 season.

The Minnesota Vikings upset the Green Bay Packers 28-22 behind a game-leading 12 total tackles from Kendricks, which catapulted the UCLA product over the 600 tackle mark for his NFL career.

Eric Kendricks eclipsed 600 career tackles today. He had another big game, leading the team with 12 (10 in the first half).

UCLA’s all-time tackle leader and a Butkus Award winner in 2014, Kendricks is now second in the NFL with 78 total tackles.

Meanwhile, undrafted rookie linebacker Krys Barnes, who played opposite Kendricks at Lambeau Field Sunday, added four total tackles for Green Bay in the loss. Barnes played with the Bruins from 2016 to 2019 and now has 47 total tackles this season.

The first American to score in the women’s FA final since 2017 is also a Bruin.

Midfielder Sam Mewis, the 2014 Honda Award winner at UCLA, scored a header in the 40th minute to give Manchester City a 1-0 lead over Everton, before going on to win the game 3-1.

Mewis scored the game-tying goal last week against Reading FC, her third of the season. With the win, Manchester City claims its third FA Cup in four seasons.