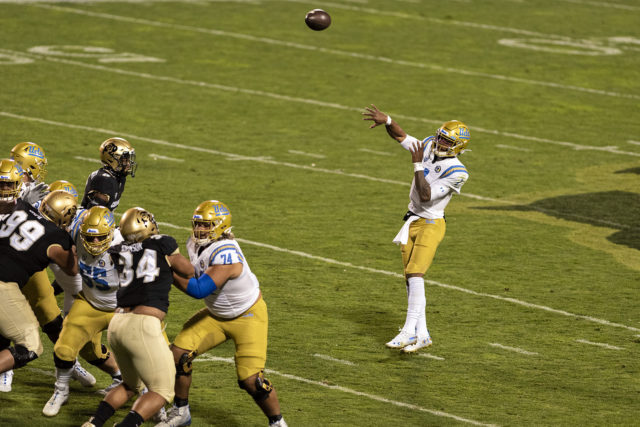 Junior quarterback Dorian Thompson-Robinson tossed two touchdowns and an interception as UCLA football goes into the half down 35-14 on the road against Colorado. (Liz Ketcham/Daily Bruin)

BOULDER—Even with an extended offseason, the Bruins still haven’t found a way to hold on to the ball.

UCLA football (0-0) trails Colorado (0-0) 35-14 at the half of Saturday’s season opener in Boulder. The Buffaloes scored 21 of their points off turnovers, and the Bruins gave the ball away a total of four times.

The first was a fumble on a punt return by redshirt sophomore Kyle Philips. Colorado took just four plays to get into the end zone after it recovered the ball, as running back Jarek Broussard scored his first of three touchdowns in the half from 6 yards out.

The next giveaway was courtesy of junior quarterback Dorian Thompson-Robinson, who threw an interception deep in his own territory that led to another Broussard touchdown one play later.

The Bruins momentarily closed the gap to seven points towards the end of the first quarter, when Thompson-Robinson completed 3-of-4 passes for 64 yards and a touchdown to redshirt senior running back Demetric Felton.

Felton was UCLA’s leading rusher and receiver in the half with 59 yards from scrimmage on 11 touches.

The one-score deficit was short-lived, however, as Colorado drove 76 yards on 10 plays to go up 21-7.

The Bruins turned it over on their next two possessions following that Buffalo touchdown – a Thompson-Robinson fumble that didn’t lead to any Colorado points and a fumble by Felton that led to Broussard’s third score of the night.

Broussard carved up the UCLA defense for 110 yards on 17 carries in addition to his three touchdowns.

Thompson-Robinson very nearly threw two picks on the Bruins’ next possession as well, but both were bobbled and dropped by Buffalo defenders. Even with his two giveaways, Thompson-Robinson still posted 146 yards, two touchdowns and a 146.7 passer rating on 11-of-19 passing in the half.

A 52-yard touchdown to redshirt sophomore tight end Greg Dulcich accounted for just over a third of Thompson-Robinson’s yards, and it made it a 35-14 game with 4:44 left in the second quarter.

UCLA will receive the ball to open the second half.