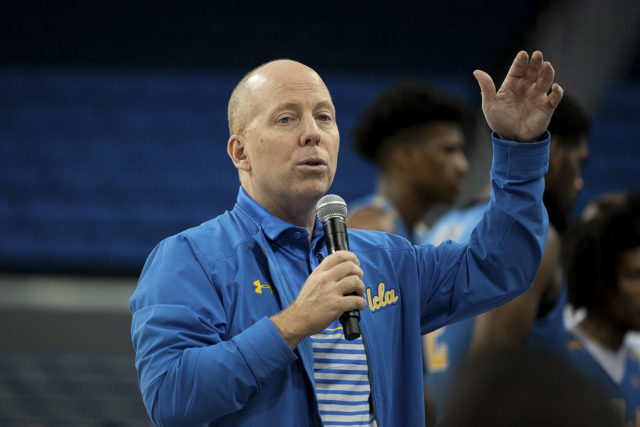 Coach Mick Cronin is known for his defensive prowess, and UCLA men's basketball showed growth in that area during the 2019-2020 season. The Bruins said they hope to carry that positive momentum over to the new campaign. (Liz Ketcham/Daily Bruin senior staff)

As cliche as the phrase is, it will be a focal point for a UCLA men’s basketball team that fell one game short of sharing the Pac-12 regular-season title last season and has not made the NCAA tournament since 2018.

Coach Mick Cronin said no matter which five guys are on the court, the Bruins will have to work together to improve on the defensive end and lockdown opponents.

“Just from a team standpoint, we don’t have elite speed to be an all-out pressing team,” Cronin said. “We got to play smart. We have some guys that are challenged with their on-the-ball defense – we’re gonna have to play great team defense. It took us a while to get five guys on the same page. I just think playing defense, in my opinion, you don’t have to have locked down defenders everywhere. You just got to play as a team and play smart and understand what you’re trying to accomplish.”

UCLA did improve defensively last year over the previous campaign, as the Bruins improved their points allowed average from 77.8 points per game to 67.1. However, that was still a step down from Cronin’s last season at Cincinnati, when the Bearcats allowed 62.7 points per game in 2018-2019.

The team finished 190th out of 353 teams nationally in defensive rating in 2020, down from 44th in Cronin’s last year at his previous job. Freshman guard Jaylen Clark said the aggressiveness Cronin is trying to instill this year can wear on a person’s body, meaning the Bruins are going to have to be in good shape for the upcoming year.

“This is a big step just like physically, like how physically demanding it is every day,” Clark said. “And if you don’t take care of your body, you’re gonna feel it as the practices keep coming.”

If he continues the trajectory he is on, Clark can help the UCLA defense immediately. Clark averaged 1.8 steals per game in his first three high school seasons, and he upped tharit to 2.6 per contest in his senior season.

Cronin said Clark’s quick hands and defensive awareness as a freshman will improve a Bruin unit that finished seventh in the Pac-12 and 140th nationally in steals per game.

“Clark is going to be an elite defensive player in his career,” Cronin said. “There’s not a day that goes by – not one day – where he doesn’t steal an entry pass and go down and dunk it or lay it in. You think our guys would adjust to the fact that he’s so good at that. But that’s just because he combines the mentality of a defender with the athleticism and the size.”

Redshirt sophomore guard Tyger Campbell chipped in with 26 steals last season – good for third on the team. He said Clark was a standout in practice but warned it is still early for the Riverside native, and growing pains should be expected.

“You know, he’s probably one of our best defenders right now,” Campbell said. “Everything is coming to him. He’s a freshman so we (have to) limit some of the stuff he does. And obviously, coming from high school to college, the game is a little bit faster. So, you know, he’s working though.”

Clark and the Bruins will test out how well the practices have helped – beginning with a Nov. 25 showdown at San Diego State.