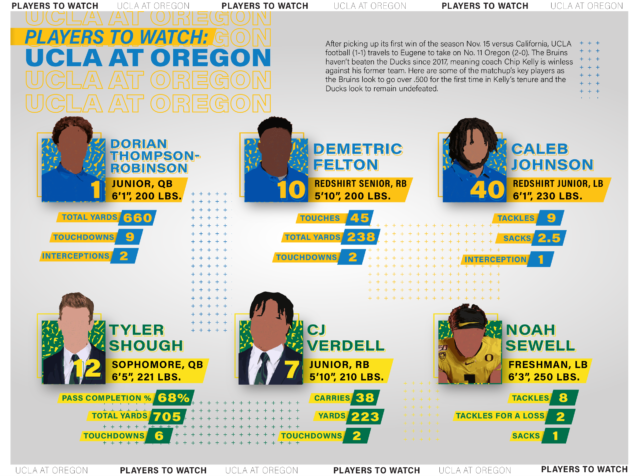 Correction: The original version of this graphic misidentified CJ Verdell.

UCLA football (1-1) will head up to Eugene to face No. 11 Oregon (2-0) Saturday to try to go over .500 for the first time under coach Chip Kelly. Will the Bruins shock the world, or will the Ducks send them home with a second straight road loss? Here is this week’s scouting report by Sports editor Jack Perez – who is glad to be back after missing last week due to the late shift.

Balance is key for the Ducks’ offense.

Following the departure of longtime starter Justin Herbert to the NFL, coach Mario Cristobal had a true quarterback battle on his hands for the first time in years.

Eventually, he turned over the keys to the offense to sophomore Tyler Shough. In his first two collegiate starts, Shough led the Ducks to two wins, with 539 passing yards and five touchdown passes on a solid 38-of-56, although he does have two interceptions.

Luckily for Shough, he doesn’t have to do it alone, as the Ducks have potent weapons in the backfield and out wide.

Wide receiver Jaylon Redd is the go-to target for Shough, racking up nine catches for 128 yards this year. Additionally, running back Travis Dye is an endzone machine, with two touchdowns on just two catches in 2020.

If Oregon feels comfortable with a lead on Saturday, expect them to go to the ground game to run out the clock on UCLA.

Running back CJ Verdell is the main threat, coming in with 223 net rushing yards on 38 attempts. Shough can also get it done on the ground with 166 total yards over two games.

The Ducks should be wary of which Bruin defense shows up. On one hand, UCLA gave up 525 total yards to Colorado in the season opener. However, the unit held California to just 176 yards one game later.

Depending on which version of the Bruins shows up, Shough and his team could be in for a smooth ride or a rough afternoon.

While the offense was supposed to be the inconsistent unit coming into the season, it’s the defense that’s been slightly underwhelming so far.

In its two contests so far, Oregon has given up an average of 417 yards per game, currently 69th in the country. While this hasn’t amounted to close games yet, the defense will have to pick it up if the Ducks face more solid offenses.

Luck has been on Oregon’s side though. In games against Stanford and Washington St., the Cardinal were missing starting quarterback Davis Mills, while the Cougars were without running back Max Borghi. Now, the Bruins might be going into Saturday’s game without junior quarterback Dorian Thompson-Robinson.

This is good for an Oregon defense still trying to find its footing. The rush defense has given up 148.5 yards per game, good for 47th in the nation. However, much of that may be due to the leads the Ducks build.

The pass defense is a different story. Oregon ranks 101st in the country in passing yards allowed per game. Even more worrying for the Ducks – they have forced no turnovers and have one sack in two games.

This will put pressure on the defensive line to create pressure on whoever lines up under center for the Bruins. UCLA has five turnovers in its two games, so Oregon needs to get to the quarterback and make life difficult for the signal-caller if the Ducks want to easily come out on top.