The Quad: Discussing politics during Thanksgiving can be uncomfortable, but manageable 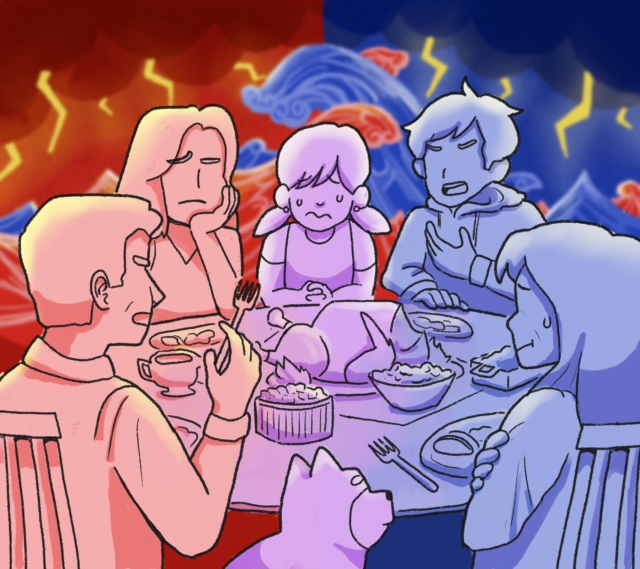 Thanksgiving celebrations can be a heartwarming gathering of one’s family and loved ones – but once politics are served at the dinner table, things can get messy.

With the recent high-strung nature of the 2020 presidential election, family dinners this year are expected by some to be tenser than ever. Talking about politics can be uncomfortable, especially when today’s college students may share different views than their close family members.

For example, in an article by The Atlantic, a professor said that while children tend to adopt their parents’ values, the more educated a child is, the less likely they are to accept their parents’ views as their own later on in life.

Additionally, a study conducted by researchers from Ohio State University and North Carolina State University called IDEALS found that 47.1% of the college students surveyed changed their political leaning during college.

When these students with conflicting views from their family members inevitably return home for Thanksgiving, making it all the way to pumpkin pie time without a heated political debate might seem impossible. So how can people keep politics from ruining the turkey?

Turns out, shifting one’s mindset can be crucial.

Jessica Collett, a sociology professor, said students should recognize a family member with different political views bases their opinions off their own personal experiences.

Students can start by reflecting on how they developed their own political beliefs – whether by scrolling on Twitter or learning in college classes – in order to better understand different experiences and perspectives, Collett said.

College can be an ideal place for this practice. According to the same IDEALS study, students tend to evolve their political beliefs from what they grew up with while in college, and in turn, become more understanding of different political beliefs. Therefore, exposing oneself to the diverse communities and conversations on campus may be helpful in handling various views.

At the same time, students may hit a wall when family members feel they are not old enough to fully form their own political opinions.

This is the case for first-year international development studies student Mia Thorsen, who says this barrier when discussing politics with her family can be frustrating.

“I feel animosity on my part because I’m being undermined and my opinion feels undervalued because of my age,” Thorsen said. “I don’t think that (my family) takes me super seriously, and my beliefs super seriously, because it’s always just going to be like, ‘Well, she’s 18, so of course that’s what she thinks.’”

Though one’s family might not agree all the time, there is always an opportunity to find a middle ground to mitigate further conflict.

Matthew Hartman, a third-year political science student, said that while he wishes his family shared his own views, he tries to seek consensus when they are discussing politics.

“I oftentimes find myself moderating a lot,” Hartman said. “(For example), whenever I talk to conservative family members … I find myself running to (a place of middle ground).”

Hartman said that while it’s not ideal his family has opposing political beliefs, they are still his family.

Collett believes family bonds are important to take care of – once they are severed, they are hard to repair, she said.

“I think that we have realized the importance of social bonds and social support,” Collett said. “It’s not going to change somebody’s mind by severing ties with that person.”

But while family ties are valuable, Collett said to prioritize what one feels is best for themself – even if that means separating from a family member.

Whether productive or futile, political talk with the family can be tricky to navigate. As Collett said, convincing somebody they’re wrong is a difficult task to accomplish over a two-hour meal.

“If you’re just going home for Thanksgiving, focus on the occasion, focus on this opportunity to be together, and know that people’s minds shift gradually,” she said.