The Quad: Recognizing the true origins of the Thanksgiving celebration 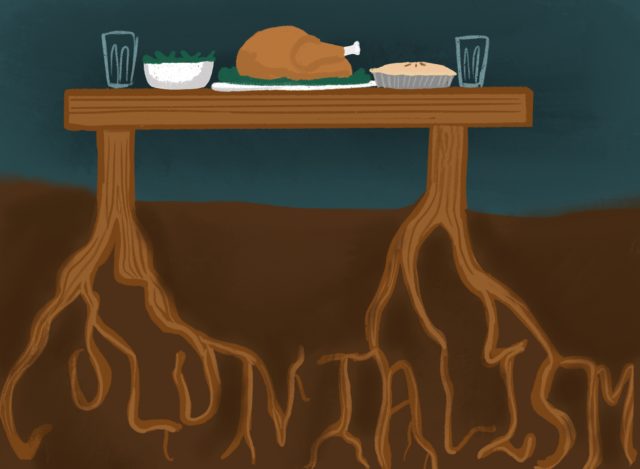 For some, Thanksgiving is a holiday to look forward to; but for many Indigenous people, this day represents more than just a turkey dinner.

As we near the end of National Native American Heritage Month, it is important to reflect on the Indigenous roots of this celebration, as the origins of Thanksgiving may be far from the festivities we know today.

The American K-12 school system often portrays Thanksgiving as a friendly feast shared between the Pilgrims and Wampanoag people in the early 17th century. However, the annual celebration of a civil past between Native Americans and European colonizers is only a glimpse of a larger history involving centuries of colonizers displacing and discriminating against the Indigenous people of America.

“I think it’s a little bit fraudulent in that it makes people feel like there was this really wonderful interaction almost 400 years ago,” said Tara Browner, an American Indian studies professor and member of the Choctaw tribe.

In reality, the history is not that plain and simple. Browner said the interactions among the Pilgrims and Native Americans began as a result of starvation and military allyship.

The Pilgrims who settled in Plymouth, Massachusetts, were starving and only able to survive with the help of the local Wampanoag tribe, Browner said. Meanwhile, Browner said the Wampanoag people were witnessing a series of devastating plagues and attempting to reorganize their community against attacks from other Native confederacies.

Koby Blackwater, a third-year biology student and member of the Navajo Nation, said his perspective on Thanksgiving is that it’s far from something to celebrate.

“To me and to all my Indigenous buddies I have around the area, we see it as a messed-up holiday,” Blackwater said. “It’s basically a celebration of genocide. Basically, the origin of Thanksgiving was a celebration of killing the Pequot people.”

While the feast shared between the Wampanoag people and the Pilgrims predated the genocide of the Pequot people, the 1637 Pequot Massacre marks the year white settlers declared Thanksgiving a holiday. During this initial event, colonists killed 700 unarmed Pequot people right before the Pequot tribe’s Green Corn Festival.

The governor of Massachusetts Bay Colony then declared a “Day of Thanksgiving” in order to celebrate the colonists who had come back from fighting in the massacre. The colonists continued raiding tribal communities, and after each successful attack, another Thanksgiving celebration took place.

The untold story of genocide and violence surrounding Thanksgiving is often overlooked in present-day teachings of this holiday.

Jack Tome, a graduate student part of the Navajo Nation, said he hadn’t learned of Thanksgiving’s true origins until his senior year of high school.

“When I was growing up in school, teachers never really spoke of the massacres that followed the first meal that occurred between the Native Americans and the settlers,” Tome said.

In learning the real historic perspective of Thanksgiving, Browner said it is important for people to acknowledge that the repercussions of past events still persist today, and coping with the season’s origins is difficult for many Native Americans.

“I think that what we have to remember is that the Native people are still here, they are all around us. There is a large community of Native Californians here, and we tend to not really deal with that very well,” Browner said.

November is also National Native American Heritage Month. Special events during this month, such as the Native Cinema Showcase and discussion-based seminars on Indigenous food sovereignty, provide spaces for individuals to both reflect on the ongoing challenges of Indigenous people and to recognize the cultural contributions of Indigenous people.

Blackwater said his culture places a large emphasis on respect – respect for elders, history and land. He encourages others to incorporate respect in their lives as well.

“I believe it is important to know your history, first and foremost, and keep educating the people,” Blackwater said. “Because it is not just the past, you can’t just take people’s land and tell them to forget it.”

So while you are thinking about which blessings to share at this year’s Thanksgiving dinner, perhaps recognize the land you live on and where it came from.

“Every single person here is living on stolen land, we are all complicit,” Browner said. “What we should really be doing on Thanksgiving is acknowledging and thanking the people who we are guests on their land.”