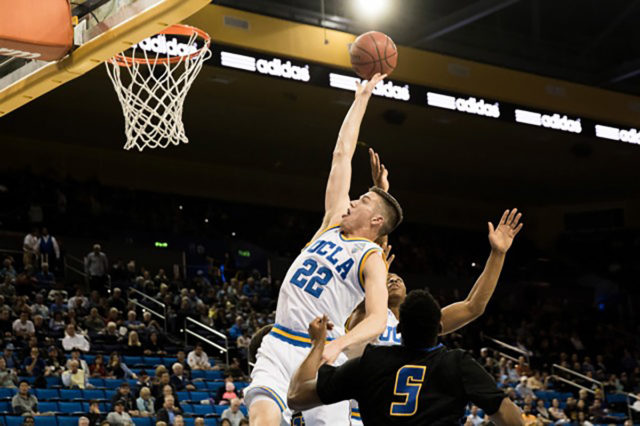 Marcedes Lewis has been in the league for 15 seasons, and he continues to bolster his resume.

The former UCLA football tight end hauled in his 37th career touchdown reception in the Green Bay Packers’ Sunday Night Football win over the Chicago Bears. Lewis already held the record for most career receiving touchdowns by a Bruin alumnus, and his most recent put him within five scores of the top 25 among all NFL tight ends.

Sunday night’s touchdown grab was also the 400th catch of Lewis’ career, which began when he was drafted by the Jacksonville Jaguars in the first round of the 2006 NFL Draft.

.@AaronRodgers12 tosses his second TD of the night.@Packers extend their lead to 13-3. #GoPackGo

Elsewhere in the NFC North, former UCLA linebacker Eric Kendricks helped lead the Vikings to a last-minute 28-27 win over the Carolina Panthers on Sunday afternoon. Kendricks led his team with 12 total tackles and two tackles for loss, with his interception early in the second quarter halting a Panthers offense that was well into the red zone.

Kendricks now has a career-high three interceptions this season, and he has broken the 100-tackle threshold for the fifth consecutive season.

In an offseason already defined by Bruins changing teams, Leaf’s former team decided it was time for him to join the party.

The Indiana Pacers traded Leaf and a 2027 second-round pick to the Thunder for guard Jalen Lecque on Wednesday. The Pacers drafted Leaf out of UCLA in 2017 after he averaged 16.3 points and 8.2 rebounds per game during his lone season in Westwood.

Since joining the league, the 2016-17 first-team All-Pac-12 forward has averaged 3.3 points and 2.0 rebounds per game with a career player efficiency rating of 13.8.

Great opportunity for TJ Leaf, the 18th overall pick in the 2017 Draft who was never able to crack former coach Nate McMillans' rotation with Pacers. As the Thunder rebuild, Leaf — a 6-10 forward — gets a chance to earn minutes with Thunder. https://t.co/MGYbIUuP64

Leaf will join another former Bruin forward in Oklahoma City, Trevor Ariza, who landed there after a string of multiple trades surrounding the NBA Draft.

The U.S. took the pitch for the first time since the start of the COVID-19 pandemic Friday, and two Bruins were there to see it through.

Sam Mewis and Abby Dahlkemper, who both played for UCLA women’s soccer from 2011-2014, started at midfielder and center back, respectively, for the United States in its 2-0 victory over the Netherlands on Black Friday. The match was a friendly, but it was still the team’s first time competing since the final round of the SheBelieves Cup on March 11.

The Gals are ready to go! 🔥
Tonight’s Starting XI vs. 🇳🇱

Dahlkemper played the full match, while Mewis was subbed out in the 89th minute. Neither former Bruin found the back of the net, but Mewis’ sister, Kristie Mewis, scored the United States’ second goal of the night in the 70th minute.