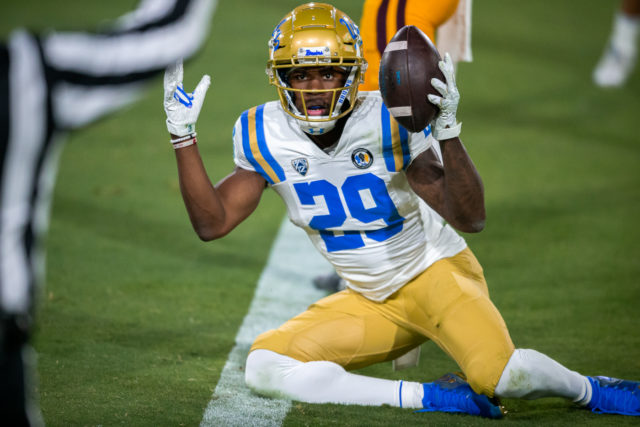 When an undefeated rival is next up on the schedule, it isn’t uncommon to pull out all the stops.

For the Bruins, that included having New England Patriots coach Bill Belichick talk to the team after Tuesday morning’s practice.

But even with a six-time Super Bowl champion stopping by for some game-week inspiration and a crosstown battle for Los Angeles a few days away, junior wide receiver Delon Hurt said it’s just another game.

“As a team, we try not to look into the bigger picture and different stuff like that, outside noise,” Hurt said. “This is the next game for us, so that’s the reason why we’re just focused on it.”

UCLA football’s (3-2) upcoming game against No. 15 USC (4-0) is its final scheduled regular season game of 2020. Should the Bruins continue their season unimpeded by COVID-19, they’ll play a seventh game against another Pac-12 opponent one week later, and they have to win at least one of those two games in order to finish the season over .500 for the first time since 2015.

Redshirt junior cornerback Jay Shaw echoed Hurt’s sentiments, claiming the added competitiveness of the crosstown matchup will wear off by the end of the first half.

Shaw went to high school with multiple Trojans, including cornerback Jayden Williams and receivers Gary Bryant Jr. and Drake London. Shaw said he’s talked with London – USC’s third-leading wideout – this week, but football didn’t even come up on their call.

Hurt has former high school teammates who are now suited up in cardinal and gold as well, but he said he hasn’t spoken to them. Growing up, Hurt was a UCLA fan, but he said there wasn’t any bad blood with the rival from South Central.

“I didn’t hate (USC) necessarily, but I always rooted for the Bruins,” Hurt said. “Pretty much, that’s how that went.”

Redshirt sophomore wide receiver Kyle Philips said Monday he, too, would approach the USC game like he would any other. Philips did say he would miss the annual Beat ‘SC Rally, which was canceled due to COVID-19 and a closed campus, but he downplayed the importance of it in relation to the game.

Throw just about anything the Bruins’ way – a legendary NFL coach, a pandemic, an underdog status or a 91-year-old rivalry – and the response seems to be the same.