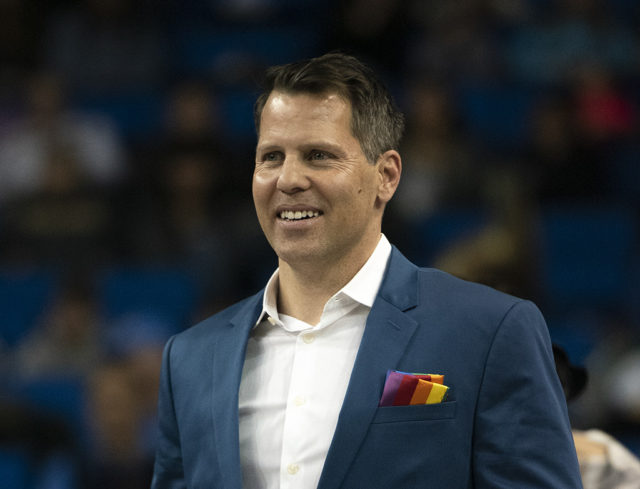 Correction: The original version of this article incorrectly stated the UCLA gymnastics season was postponed. In fact, the team is waiting for a schedule release.

As the Bruins await a schedule release, UCLA gymnastics has taken to the web to connect with its fans.

The team has continued its Bruins Inspire Campaign to provide content, building off its previous success, while meets are on hold.

The UCLA Athletics account posted a YouTube video Dec. 1 introducing the campaign’s 2020 format as well as this year’s team and coaching staff.

“It is the way we bring UCLA gymnastics to you,” coach Chris Waller said in the video. “(We want to provide) content that tells all the incredible stories of our team and the women on our team that inspire.”

The campaign includes multiple content sections, ranging from the lighthearted “Mic’d Up” and “Bruin Banter” videos to the in-depth and personal “The New Era” documentary series. Senior videos and pre-meet videos will also be included in the campaign.

The content rollout has found success, consistently garnering tens of thousands of views per video on YouTube. Waller attributed the power of the campaign to its inspiring message and ability to help fans relate with the UCLA gymnasts.

“Things we’ve heard like (our videos) have taught you resilience or have inspired you to be more joyful,” Waller said. “Maybe they’ve inspired you to have more confidence in yourself because you can relate to our student-athletes on our team because they’re going through something that you can understand.”

Waller also praised the creativity and professionalism his team dedicates to the videos.

“The artistry and creativity and execution and planning and work that was behind it is extraordinary,” Waller said. “And we have an all-female, completely diverse, creative team. The shoot was so professional, the student-athletes were complete pros ready to go.”

“The New Era” documentary series aims to highlight the personal, everyday struggles that gymnasts experience and currently consists of seven episodes, each of which has eclipsed 115,000 views.

In the second episode, senior Kendal Poston opened up about dealing with her flight anxiety during the gymnastics season. Poston said that the series has helped her recognize how many people struggle with the same affliction.

“With Deanna (Hong), I really didn’t feel the anxiety about putting my story about flight anxiety out there,” Poston said. ”To be able to connect just a tiny bit with people who go through similar things really just brings joy to my heart.”

Hong is the creative mind behind the Bruins Inspire Campaign.

Last season, the team traveled four times through the air, forcing Poston to confront her flight anxiety. She competed in the beam rotation in three of the meets, scoring a 9.85 at both Stanford and BYU.

Poston added that the campaign emphasizes the hardships of being a student-athlete rather than just focusing on the positives.

“Some programs only celebrate the wins – you don’t get to ride the wave of the struggles, the hard times, the fight and the grit,” Poston said. “You step into our daily lives, and you see our struggle so you can relish in our wins.”

In another installment of the series, junior Norah Flatley discussed her struggle to find her inner competitiveness. Flatley set career-high marks of 9.950 on floor and beam last season against Washington.

She said that the ability to put personal stories on social media helps remind the public that athletes are people with feelings and ordeals too.

“It shows the world that we are much more than gymnasts, that we’re unique and diverse,” Flatley said. “It’s what really makes UCLA gymnastics, UCLA gymnastics.”

Despite the Pac-12 having yet to schedule a season, Waller hinted the Bruins Inspire Campaign is planning new content coming soon.

“I’ll be surprised if the public (doesn’t) freak out,” Waller said. “It’s going to be absolutely stunning.”