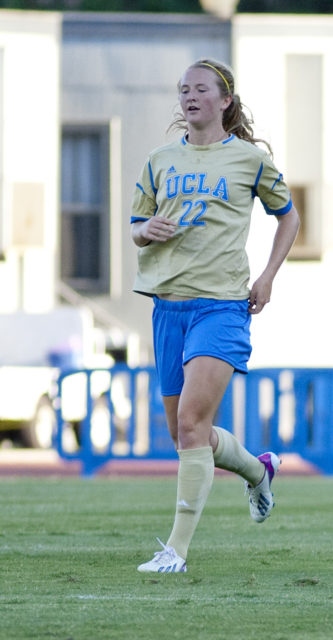 This year’s U.S. Soccer Female Player of the Year reigns from Westwood.

The 2014 Pac-12 Player of the Year netted two goals in her previous three club games and can continue her run of form into next year when Manchester City resumes play on Jan. 9 against West Ham United.

Whether you call her Samantha, Sam or the Tower of Power, you can now *officially* refer to her as: 𝐓𝐡𝐞 𝟐𝟎𝟐𝟎 #USWNT 𝐏𝐥𝐚𝐲𝐞𝐫 𝐨𝐟 𝐭𝐡𝐞 𝐘𝐞𝐚𝐫!

Following her Champions League debut as a substitute in the 5-0 victory one week prior, the two-time MAC Hermann Trophy Finalist remained on the pitch for all 90 minutes in the Blues’ 3-0 win, helping the club advance to the competition’s round of 16.

The Canadian international played in 75 matches during her collegiate career from 2016-2019 at UCLA. So far, for her English club, Fleming has recorded eight appearances across all competitions and has already won a trophy, the FA Women’s Community Shield.

The Holiday family is in the holiday spirit.

In an Instagram post Saturday, Bruin alumni, Jrue Holiday – a guard for UCLA men’s basketball from 2008-2009 – and his wife Lauren Holiday – a midfielder for UCLA women’s soccer from 2006-2009 – announced they would donate the remainder of their 2020 NBA salary to Black-owned small businesses affected by the COVID-19 pandemic.

Jrue Holiday and his wife Lauren are giving back 🙏 pic.twitter.com/OAhqQVnw9N

Aaron – the Pac-12’s 2017-2018 leading scorer as a member of the Bruins – started all three preseason games for Indiana, racking up 26 points in 80 minutes. The youngest Holiday brother recorded 16 of his 26 total preseason points, which included four 3-pointers, in the Pacers’ 116-106 loss to the Cleveland Cavaliers on Dec. 14.

Every Milwaukee-Indiana matchup this upcoming season will be a family affair after Jrue’s addition to the Bucks.

One former Bruin had a short stay in Oklahoma City.

Nearly a month after acquiring T.J. Leaf from the Indiana Pacers, the Oklahoma City Thunder have waived the power forward, the team announced Friday.

Leaf played 17 minutes in the Thunder’s opening preseason win against the San Antonio Spurs on Dec. 12th. He recorded eight points and five rebounds off the bench while maintaining a plus-12 plus-minus but only logged six minutes of action in the team’s final two preseason exhibitions before being released.

The former All-Pac-12 selection and 18th overall pick of the 2017 NBA Draft is now a free agent with the start of the season just a day away.