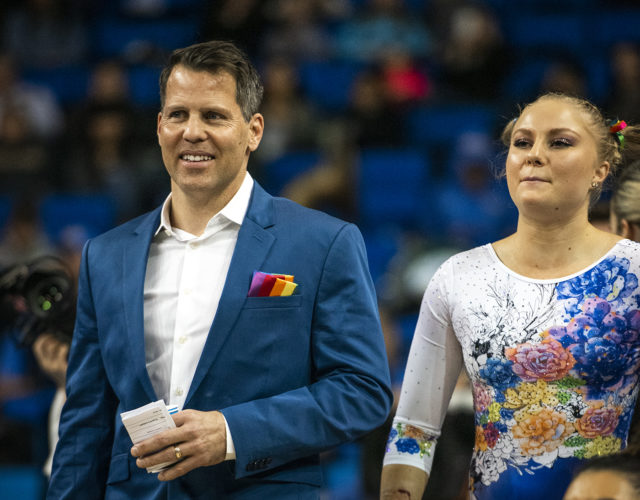 UCLA gymnastics second-year coach Chris Waller said this year's freshmen are one of the closest groups he has ever coached. (Kanishka Mehra/Photo editor)

This post was updated Jan. 10 at 5:06 p.m. to address a transcription error in Chris Waller’s quote.

With UCLA gymnastics graduating eight seniors from last season, the 2020 freshman class is aiming to leave its imprint on the team.

Some notable departures from the Bruins’ team that finished last season ranked No. 3 in the country include standout gymnast and 2012 Olympic gold medalist Kyla Ross and No. 3 ranked floor performer Gracie Kramer.

Four new faces replace the outgoing seniors – two from California and two from out of state. Coach Chris Waller said he expects the freshman class to carry out a more impactful position than usual on this year’s team.

“(The freshmen) are definitely going to play a larger role on our team than past seasons,” Waller said. “They have done an incredible job coming in and finding their footing.”

Of the group, Frida Esparza was the first to sign her national letter of intent to compete at UCLA in November 2018, originally as a class of 2019 recruit, but deferred last season to help Mexico qualify for the 2020 Olympics.

Esparza, the Mexican all-around champion in 2018, said she wants to help contribute to the UCLA gymnastics culture by staying positive while a 2021 gymnastics season is potentially in flux.

While other Pac-12 gymnastics squads have started competing, the Bruins are still awaiting an official schedule release.

“We are just trying to figure out ways to stay positive and to stay united,” Esparza said. “Everyone has to be really in touch with like their individual needs, especially mentally and emotionally. So we’re just trying to support each other and see what this year’s going to bring.”

Waller said he was excited to see what Esparza could contribute, especially after the team had so much time off because of the COVID-19 pandemic.

“(Esparza) is just an absolute beautiful gymnast,” Waller said. “Our whole program’s got plenty of work to do because so many people had so much time off but … (Esparza’s) going to be amazing. She’s gonna light it up out there.”

Another freshman, Chae Campbell, became Waller’s first official recruit as the Bruins’ head coach when she signed her national letter of intent in November 2019. Campbell, from Carrollton, Texas, placed third in the all-around at the 2019 Junior Olympic National Championships.

Waller said Campbell’s confidence and composure as a freshman has impressed him already.

“(Campbell) is extraordinary,” Waller said. “She’s very confident, and I don’t know that I’ve ever seen someone come into the program and … from day one be as comfortable as she is.”

Campbell said she wants to contribute wherever the team needs her, even if it isn’t her favorite event.

“My goal is to contribute where I’m needed,” Campbell said. “My favorite event is probably floor. So, naturally, I would want to be on that a bit. Hopefully, if my team needs me I’m going to be there on bars, beam, anything – I’m just ready to go.”

Moors is a member of the Canadian national team and helped lead the country to its best team finish in team competition when it placed fourth at the 2018 World Championships.

“We want to make sure that we continue our legacy of extraordinary floor performances,” Waller said. “Recruiting athletes like Brooklyn Moors fills that need for us. We want UCLA to inspire and entertain the world, along with win championships.”

Despite Ulias having the least professional experience among the incoming freshmen, Waller said he was looking forward to her bar rotations. Ulias won the uneven bars and floor exercise to place second in the all-around at the 2019 Heart of a Champion meet.

“She doesn’t have as much competitive experience as (Campbell and Esparza) but Sara Ulias, she swings bars beautifully,” Waller said. “I mean it’s just, it’s artistry in motion.”

Even with the pandemic, the group has been able to bond quickly. Campbell, Ulias and Esparza all live on the same floor and connect virtually via FaceTime, group viewings of Marvel movies or the online game Webkinz World.

Campbell said it has been easy to bond with her fellow freshman teammates in a time when connecting with the returning gymnasts has been more difficult.

“I didn’t really get to know everyone as much as I wanted to,” Campbell said. “(Esparza) and (Ulias) just … make me laugh all the time. Getting through the whole quarantine thing was not that bad because … we find ways to make it where we’re kind of together even though we’re not in the same room.”

According to Waller, the group is one of the closest he has ever coached and he is amazed how rapidly they have grown together.

“They are an unbelievably tight class, like they have each other’s back as much as any class ever,” Waller said. “You just see the love pour out from their pores for each other. It’s a beautiful thing.”