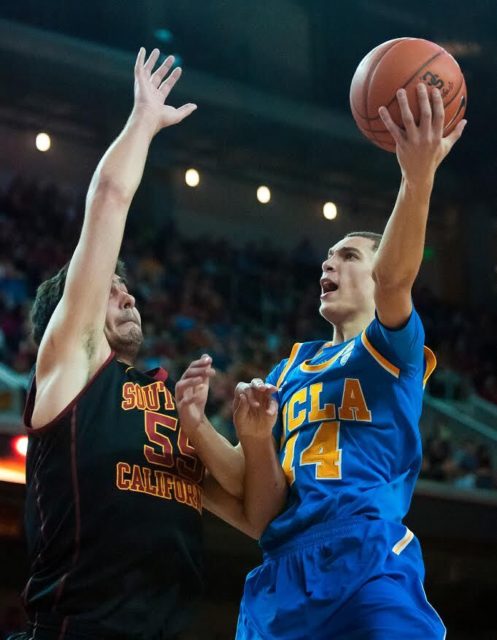 Zach LaVine, who earned 2013-2014 Pac-12 All-Freshman Team honors in his lone season at UCLA, is on pace for career highs in points, assists and rebounds while leading the Chicago Bulls to its best start since 2016. (Daily Bruin file photo)

A trio of former UCLA basketball guards is off to a hot start in the NBA.

Following a five-game stretch in which he averaged 34.4 points per game, Zach LaVine has the Bulls off to their best start since 2016.

The former Bruin, who earned 2013-2014 Pac-12 All-Freshman Team honors in his lone season at UCLA, scored 39 points in a win against the Dallas Mavericks before burying the Portland Trail Blazers two nights later with a step-back 3-pointer in the waning seconds of the game.

LaVine made his return to Los Angeles on Friday, pouring in a game-high 38 points in a narrow loss to the Los Angeles Lakers. On the final stop of the team’s West Coast road trip, LaVine added 45 points on 10-of-16 shooting from beyond the arc against the Los Angeles Clippers.

Elsewhere in the NBA, Jrue Holiday has quickly acclimated to the Bucks.

In his 12th NBA season and first in Milwaukee, the former All-Star guard is shooting 40% from 3 and averages 2.1 steals per game — both on pace for career highs. Holiday averaged 1.6 steals per game for UCLA in 2008-2009 en route to earning Pac-10 All-Freshman team honors.

I'd like to see Jrue Holiday unleashed a little bit more. Attacks in transition, almost looks like he's playing 21 once he gets in the paint. pic.twitter.com/jERcwKuVjr

Holiday is not the only former Bruin on pace to break personal records.

2016-2017 Pac-12 Player of the Year Lonzo Ball, who has started in all nine games for the Pelicans this season, is averaging a career-best 12.4 points per game.

On Friday, the guard had the opportunity to play against his brother and former UCLA verbal commit, LaMelo Ball of the Charlotte Hornets. Prior to the game, the two brothers had never competed against each other in a regulation game at any level.

Lonzo scored 5 points on 25% shooting and was outdueled by his younger brother, who finished one assist shy of a triple-double.

The third Ball brother and former UCLA basketball guard LiAngelo Ball signed a contract to play in the G League bubble in 2021. The middle Ball brother was waived by the Detroit Pistons earlier this season less than two weeks after signing a one-year, nonguaranteed contract with the team.

Any time, any place.

On the heels of her second WNBA championship, Jordin Canada has been playing professionally in Turkey for Hatay BSB during the offseason.

In her third game with the Turkish squad, the guard recorded 28 points on 10-of-13 shooting from the field in addition to eight assists, five rebounds and two steals. The 2014-2015 Pac-12 Freshman of the Year, who started in 131 games for the Bruins during her four-year tenure, played all 40 minutes in the contest.

Canada followed up her 28-point performance with a near triple-double Saturday, registering 9 points, eight rebounds, seven assists and a game-high +31 plus-minus.

The UCLA all-time assist leader and two-time Pac-12 Defensive Player of the Year has won two WNBA championships in three professional seasons with the Seattle Storm since being selected with the fifth overall pick in the 2018 WNBA draft.

Canada will not be the only UCLA basketball alum playing in Europe.

The former Bruin was selected in the second round of the 2019 NBA draft and spent the majority of his rookie season with the Long Island Nets, the G League affiliate of the Brooklyn Nets. The guard, who led the Pac-12 in assists during the 2018-2019 season, averaged 11.3 points and 3.3 assists per game in 40 games for Long Island.

Hands was traded to the Detroit Pistons before the start of the 2020 NBA season but did not make an appearance for the team. Detroit will retain Hands’ NBA draft rights as he competes overseas.

The UCLA men’s soccer alumnus accepted an offer to become the next head coach of the LA Galaxy.

Vanney played for the Bruins for three seasons from 1993 to 1995, earning honorable mention All-American honors in 1995. The defender scored eight goals and assisted on 10 more in his senior campaign, leading the Bruins to a 17-2-1 record during the regular season.

Following his collegiate career, Vanney played more than 10 professional seasons from 1996-2008, including seven with the Galaxy. He accepted a head coaching offer with Toronto FC in 2014.

In 2017, Vanney and Toronto won the domestic treble — winning the Canadian Championship, Supporters’ Shield and MLS Cup in the same season — a feat that no MLS team had ever accomplished. Vanney earned MLS Coach of the Year honors to top off Toronto’s historic campaign. He is the second Bruin to win the award, joining his former coach at UCLA, Sigi Schmid.