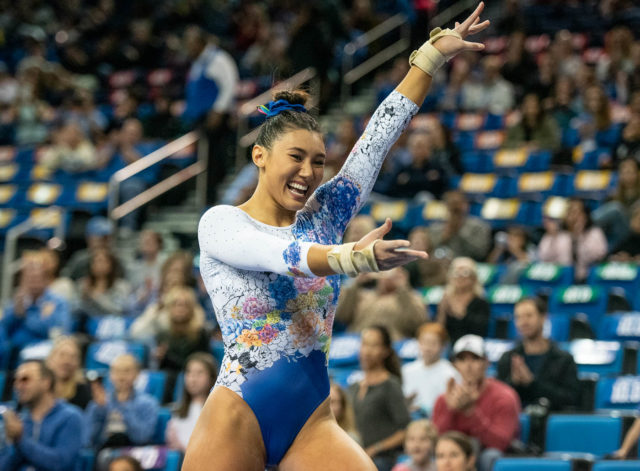 UCLA gymnastics alumna and undergraduate assistant coach Kyla Ross helped lead the team in a game of capture the flag on a one day retreat at Easton Stadium. (Kanishka Mehra/Photo editor)

With its traditional preseason retreat falling victim to COVID-19 protocols, UCLA gymnastics got creative and turned to an Olympian’s elementary school roots.

Since large indoor gatherings are prohibited in Los Angeles County per the county’s COVID-19 guidelines, the team headed up to UCLA’s Easton Stadium on a foggy Los Angeles morning.

Coach Chris Waller said while the retreat was only a day, it offered the group an opportunity to get to know and open up to their teammates.

“We called it our little retreat day. Compared to last year, it wasn’t really the same retreat, but you make the best of what you’ve got,” Waller said. “It was a really important day for all of our team to get connected and play games together, and ultimately it helps to bring people together. It helps (everyone) to get to know the true person inside each of our athletes.”

Once UCLA gathered at the field, they divided into two groups and initiated a game of capture the flag at the suggestion of new undergraduate assistant coach and two-time Pac-12 gymnast of the year Kyla Ross.

The Olympic gold medalist and five-time world championship medalist said it had been her favorite game in elementary school and wanted to give her team a challenge.

“I always loved team challenges, like any team challenge you would do I would literally give 100%,” Ross said. “It was really fun just kind of choosing which team activity you’re going to do that day.”

Despite the game’s relatively simple rules – each team hides a flag in its own territory and the other team tries to steal and return it to their territory – Ross said there was more debate regarding refereeing than at her elementary school bouts.

“Honestly, I think in elementary school we didn’t think about the rules that much,” Ross said. “But just starting the game (at retreat), I swear we had three different scenarios. They were like, “What? That’s a new rule!” and some of the girls were getting mad. It was funny.”

After the game finally kicked off, the athletes’ competitive nature set in. Freshman Frida Esparza said both her freshman classmate Chae Campbell and junior Norah Flatley took the competition to another level.

“I was so scared if I saw (Campbell) heading towards me,” Esparza said. “So, I would slow down so that she would slow down and I’d be fine, because if you go fast and she goes even faster you’re just going to collide. (Flatley) was really competitive too but, (Flatley) was on my side, so it was kind of hard to tell.”

While Waller has previously noted Campbell’s confidence and competitiveness, Flatley has struggled channeling her competitiveness in her time as a Bruin, opening up about her battle with complacency in an episode of “The New Era” documentary series.

Campbell, whose uncle, Calais Campbell, plays for the Baltimore Ravens in the NFL, admitted that her vigor and desire to win had lasting effects.

“Yeah, I tend to get a little competitive,” Campbell said. “I was really sore after doing that. Just starting to do like blue versus gold challenges is pretty exciting and there was some competitiveness on the field but it was really fun.”

Along with their competitiveness, another aspect that stood out to Waller was his team’s speed. Although a study found that on average, gymnasts reach 16 miles per hour on their run-ups for vault, Waller was sure they tallied higher speeds trying to steal their opponents flag.

“I had no idea (how fast they were). Half of our team could be track athletes, they’re so fast,” Waller said. “If you don’t have (a) vault table in front of them, man, they can hustle. I mean they were sore for a few more days after.”

Ross scored a perfect 10 on vault five times during her time in the Bruins’ rotation, and Campbell won the Texas State Championships on vault in 2015, 2018 and 2019.

Some of Campbell’s teammates endured hardships other than soreness during the game. With the fog and humidity making the field muddy in various spots, two Bruins slipped and ended up with mud stains.

“It’s always pretty foggy in the morning so part of the field was actually muddy,” Ross said. “I think (junior) Sara Taubman and (Esparza), some of the girls, slipped in the mud and they literally had mud all over their shirts, but they didn’t care because they wanted to win the game.”

At the end of the day, winning stood at the forefront for a Bruin team that last won the national championship in 2018.

“I loved seeing how competitive they got the moment we started the game,” Waller said. “It was like the most important thing in the world right now (was) winning this game and they played so hard.”