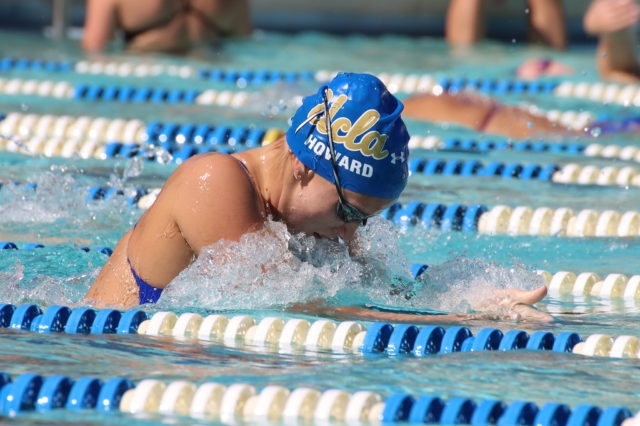 Junior swimmer Abriana Howard and UCLA swim and dive will go head-to-head this weekend in a two-day dual meet versus Fresno State, while the divers compete against Utah and UNLV in the Bruin Diving Invitational. (Courtesy of Richard Quinton)

The Bruins are officially back in the pool.

Second-year coach Jordan Wolfrum, coming off the team’s best Pac-12 finish since 2014, said she is thankful for the opportunity for her team to compete.

The two-day, swim-only dual meet is the first of its kind this season for the Bruins. The team ended with five qualifiers for the NCAA Championships last season before it was canceled because of COVID-19.

Junior swimmer Abriana Howard, who competed in all nine of the team’s dual meets last season, said the COVID-19 pandemic has not changed the substance of the practice, but it has changed how many people are in each lane, perhaps for the better.

“I mean obviously the major difference is we’re always masked and socially distanced,” Howard said. “Because of that, now we each have our own lane during practice, which is actually very nice because it’s not as wavy – basically you have your own space. … Most of the sets in practices that we’ve done are similar to what we’ve done in the past, so COVID-19 hasn’t really affected what we do in the pool.”

While the COVID-19 pandemic may not have changed the drills in practice, it has altered the team’s schedule. The season, which normally begins in September and features at least 10 meets, has been cut in half with only five meets in a two-month span.

Because of the limited opportunities for athletes this season, Wolfrum said the team will be strategic in which athletes compete in which events.

“This year is a little bit more of just taking the opportunity and making sure that each of our athletes gets as many opportunities as possible to put their best foot forward,” Wolfrum said. “Whereas we’ve got some athletes who may swim eight different events in a normal year, … this year we’re trying to really narrow our focus down to, if we only have three chances to compete, what do each of those athletes need to do three times to be able to get the best results out of it?”

Junior swimmer Delaney Smith, who finished seventh overall last season in the 200 IM at the 2020 Pac-12 Championships, said she most looks forward to seeing her teammates’ hard work pay off and build a level of camaraderie unattainable without competition.

“The most fun part of college swimming is being with your teammates and cheering each other on and seeing everyone’s hard work pay off,” Smith said. “We haven’t had that in a while, and it’s been a lot of hard training and trying to stay tough mentally, but now we’re back to racing this weekend so it’s exciting to get that spirit back.”