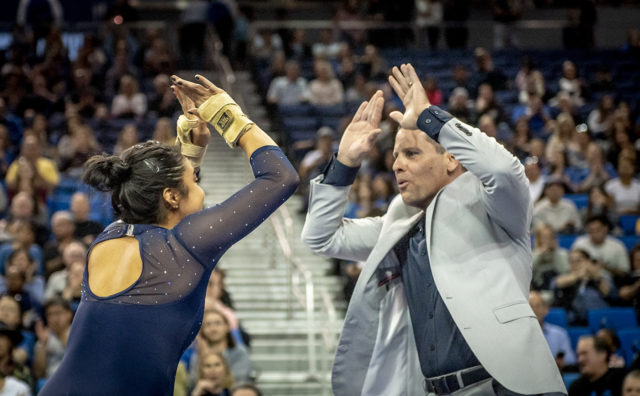 Despite COVID-19 protocols keeping the UCLA gymnastics freshmen in separate rooms, the team has found strategies to integrate the newcomers.

In any other year, the freshmen would be sharing a room on UCLA’s campus. This season, the three new Bruins – Chae Campbell, Frida Esparza and Sara Ulias – are cooped up in single rooms because of the pandemic, making it more difficult to connect with their other teammates.

However, even in isolation, Esparza said she has bonded with the upperclassmen in practice, something different from her gymnastics experience prior to coming to Westwood.

“We get to talk to each other in practice, which wasn’t a common occurrence in club, so that took some getting used to,” Esparza said. “We have normal conversations in between events when we’re practicing which makes it a lot easier to just get to know everyone.”

During the offseason, the gymnasts were dispersed all across the country, which Campbell said made it difficult to grow the relationships she had planted during her official and unofficial recruitment visits.

“I think what really helped (getting to know my teammates) is going on unofficials and officials, so we kind of get to know teammates as we’re about to come into college,” Campbell said. “Originally, we weren’t even all in the same state, so we just had to work with what we had. Luckily, we got to know the teammates pretty well beforehand.”

Coach Chris Waller took advantage of the unique situation and the need for stringent COVID-19 protocols by making them bonding opportunities for his team. Rather than implementing rules on his team, he allowed the gymnasts to come up with their own set of rules as a group.

Waller and his staff then reviewed the team-set guidelines and passed them on to UCLA Athletics, where they were then approved.

“In terms of the rules that we have for the team, the team came up with its own rules,” Waller said. “So far, I believe our team has done a remarkable job, they’ve been great. So in terms of me trusting that they will continue to do so, I believe they will.”

More than 10 months since its last official meet, the team is motivated to avoid two-week quarantines and stay together. Waller said the team has a clear understanding of how to handle the protocols in order to return to a normal schedule of business.

“I can’t say enough about how motivated our team is to continue to have as normal (of a) life as possible,” Waller said. “They want to be together, they want to train, they want to prepare for (the) season. They want … the best season they can have and they’re very motivated and understand very clearly what that looks like in terms (of) protocols in our gym.”

Per UCLA’s latest testing results, there had been one positive PCR test within the UCLA gymnastics program, which occurred the week of Dec. 18 – just as the gymnasts were on the verge of heading home for winter break.

Despite the unpredictable circumstances, Waller said the returning athletes have done an impressive job integrating the freshmen.

“Our upperclassmen and returners have done a good job of having some safe gatherings,” Waller said. “They study on campus somewhere outside, or they just have one or two people over or they go to the beach.”

While freshmen usually room together, gymnasts can choose their roommates in their sophomore year and often live with athletes from other sports. Because of the COVID-19 pandemic, the returners are mainly living with their gymnastics teammates this season.

“Honestly I think just with having all the protocols, all the girls are living together and so they live with two or three of the girls on the team,” Ross said. “Just having our team so close I think (has made it) a little bit easier, especially for the freshmen, to kind of adjust to being part of that team, and I think they’ve really embraced that culture.”

With the Bruins’ first meet on the horizon – UCLA is set to face off with Arizona State on Jan. 23 – Waller added that the trust the team has shown for each other is immense, and he is confident that it will continue to defy the obstacles and adversity the COVID-19 pandemic has brought on.

“We built a culture based on trust and accountability and communication,” Waller said. “They’re really doing a great job of everything.”