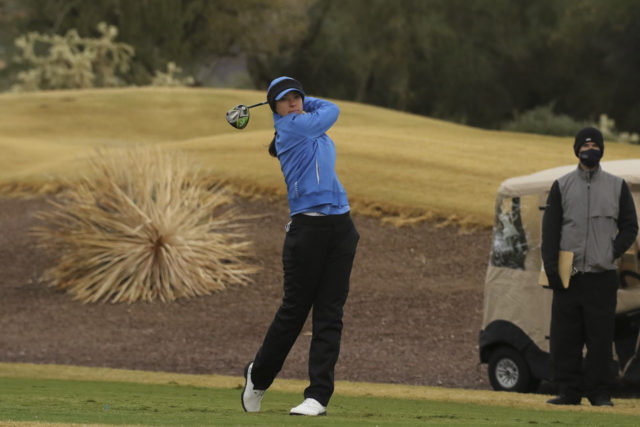 Sophomore Emilie Paltrinieri finished in seventh place in UCLA women's golf's first tournament of the season two weeks ago and will be one of five Bruins to tee it up this week in the Lamkin Invitational. (Courtesy of Arizona State)

After battling the elements at The Match in the Desert, the Bruins said they hope to see a sunnier outlook for their next time out this week.

Twelve teams will be in the field in the tournament hosted by San Diego State, including Pac-12 schools Colorado, Arizona, Washington State and crosstown rival USC.

Coach Carrie Forsyth said that while the team is excited to be out there for the Lamkin Invitational, there will be challenges that come from playing 36 holes in one day.

“Everybody seems excited … the golf course we’re playing is really good, and the weather is supposed to be good, which is nice,” Forsyth said. “The challenge will come from playing 36 holes. The course is pretty hilly, so there will be some challenges. It will definitely be an endurance test.”

This is the Bruins’ second tournament of the year, with the first being The Match in the Desert in Gold Canyon, Arizona. UCLA finished in second place, 14 strokes behind winner Arizona State. On top of having to shake the rust off, sophomore Emilie Paltrinieri said UCLA dealt with inclement weather throughout the week, which hindered the team’s performance.

“It was hailing, there was a storm, there was wind, rain … but playing in extreme conditions helps you stay focused on the smaller things,” Paltrinieri said.

While The Match in the Desert was the first match of the season for the Bruins, Paltrinieri noted that this upcoming event is the first major one the team will play.

She said her teammates are all excited to get the opportunity to compete in a bigger field after the extended time off.

“It was nice to start the season with a friendly match in Arizona because it got us back to competing after such a long time. … We’re really excited about next week because it’s finally one of the major events that we get to play in,” Paltrinieri said. “Obviously we haven’t competed in a while, but I think our team is really looking forward to it and is ready to get back on the golf course.”

Members of the team emphasized short game going into the event. While Paltrinieri said the team is solid with long game and ball striking, junior Phoebe Yue said everybody would like to see improvement in short game and shots around the green this week.

“We’ve been working hard to tune these things up,” Yue said. “Hopefully statswise, short game is better for everyone.”

While this week’s tournament is the main focus for the Bruins, Forsyth emphasized that the long-term goal for the season is getting back to the national championship. Because of the shortened season, Forsyth said every tournament will have a more significant impact on the goal in pursuit, making it crucial for the team to stay healthy and play well every step along the way.

“We obviously want to qualify for the national championship,” Forsyth said. “Our conference is getting a very late start … so there is a sense of urgency with the few events we’re playing and how we do. We have to stay healthy. … If we miss tournaments because of positive tests, … we’re going to have a tough time qualifying for the national championship because we’re cramming the whole season into a couple months.”

This week, UCLA will ride with the same starting five as it did in Arizona. The lineup consists of sophomore Emma Spitz – the team’s lowest scorer two weeks ago – Paltrinieri, Yue, sophomore Annabel Wilson and junior Simar Singh.

The Bruins will tee off Monday at The Farms Golf Club.