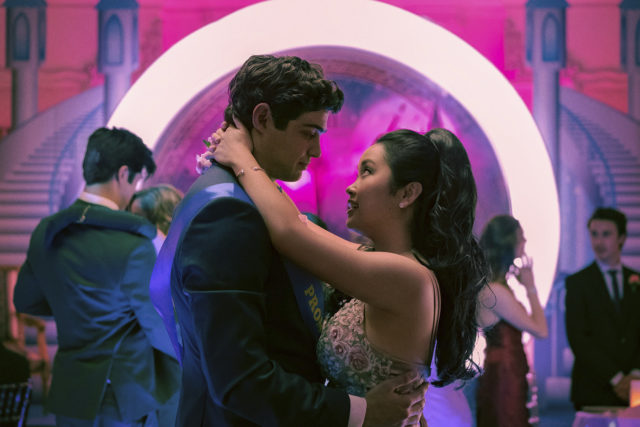 "To All the Boys: Always and Forever"

Nothing lasts forever – except, of course, gushy teenage romance.

Releasing Feb. 12 on Netflix, “To All the Boys: Always and Forever” manages to tie together the film series with a shiny bow, glimmering with both nostalgia and new beginnings. The final installment of the trilogy closes the last chapter in Lara Jean Song Covey (Lana Condor) and Peter Kavinsky’s (Noah Centineo) love story, as the couple basks in the glow of their senior year while confronting the murky future that lies ahead.

Though the film is an overall wholesome watch, its storyline struggles to walk the line between bittersweet sentimentality and cringeworthy naivete. But even so, Condor’s portrayal of Lara Jean’s evolution from a moon-eyed dreamer to a confidently self-sufficient adult is admirably elegant and serves as a reminder that she is the heroine of her own love story.

And as expected, Lara Jean and Peter’s relationship anchors the plotline. Yet, unlike the first two installments, “Always and Forever” fails to deliver an intriguing romantic impetus – like the previous films’ pretend relationship or love triangle – which results in a somewhat lackluster narrative. The central conflict is revealed early on when Lara Jean is not admitted to Stanford University alongside Peter, immediately setting up a predictable plot archetype and confining the film to only a few limited endings.

Despite the dragging plot, Condor and Centineo’s palpable on-screen chemistry is worthy of applause. Heartwarming moments where the two are applying face masks together or bantering over diner pancakes feel more like candid glimpses into a couple’s real life rather than a scripted scene. Sadly, the actors’ genuine chemistry cannot entirely rescue the film from its cringe-inducing plot points.

Such scenes are a glaring reminder that the pair is still a high school couple with their fair share of teenage immaturity. It is rather painful to watch their fiercely blind commitment to each other, with initial talks of Lara Jean transferring universities to be with Peter. And their insistence that they are not a naive, cliche high school couple – which only makes them even more so – detracts from the actors’ performances.

But while Lara Jean and Peter’s love story takes center stage, subplots and supporting characters are unfortunately discarded and granted only a few minutes of the spotlight. Peter’s tumultuous relationship with his father, as well as the blossoming romance between Lara Jean’s best friend Chris (Madeleine Arthur) and Peter’s sidekick Trevor (Ross Butler), are awkwardly forced throughout the film, which fumbles to squeeze in brief moments of halfheartedly written dialogue.

Similarly, the Covey family’s screen time is few and far between compared to the previous films. Viewers are only granted limited snippets like the opening scene of their family trip to Korea, which supplied a delightful montage complete with colorful shots of bustling streets and warm lighting, enhancing the playfulness of the three sisters’ tandem bicycling.

However, if the scarce appearances from supporting roles are the required collateral damage for Lara Jean’s character development, then they are a worthy sacrifice. Condor’s portrayal of Lara Jean’s growth – both within the film and the trilogy as a whole – is laudable, as the protagonist’s signature watching-from-the-sidelines personality is largely absent toward the end of “Always and Forever.”

Rather than follow the familiar to chase after Peter, Lara Jean’s ultimate decision to attend New York University and prioritize herself is indicative of her maturation from her former daydreamy persona. However, her character’s essence is not completely erased, as Condor manages to gracefully balance Lara Jean’s newfound bravery with her endearing hopefulness in the face of uncertainty.

But perhaps what the film does most superbly of all is capture a moment in time when the world is changing underneath Lara Jean’s feet, and all she wants to do is press pause. Events like prom and graduation are both elated moments of celebration and heart-wrenching reminders of how her life is evolving beyond her control.

When Lara Jean and her family dance joyously at her father’s wedding, the beautiful, slow-motion sequence grasps onto the nostalgic feeling of turning over a new leaf. The quaint backyard celebration dotted with ambient string lights is a fitting backdrop for Lara Jean’s internal monologue as she realizes that she will cherish such memories forever, even when she must let go of her present life.

Ultimately, the final scene provides enough closure to assure fans that Lara Jean and Peter will remain together for the foreseeable future but simultaneously leaves an open window for the beloved couple to grow as their own selves. And as the ending closes with a beginning, viewers are left with a familiar, bittersweet sensation of satisfaction.

But of course, love stories don’t end – they only continue with another chapter.